The amount of computing done in the world’s data centres increased by about 550% between 2010 and 2018, as cloud computing and big data changed the way we work, live and play. But what didn’t change – at least, not by much – is the amount of energy consumed by data centres during the same period.

A recent paper in the journal Science found that energy consumption in data centres grew by just 6% during that boom time, with the energy-efficiency gains outpacing anything seen in other major sectors of the economy. So, while data centres now power more applications for more people than ever before, they still only account for about 1% of global electricity consumption… The exact same proportion as in 2010.

How is that possible? Urs Hölzle, senior vice-president of technical infrastructure at Google, has a few ideas. ‘For Google, the answer comes down to a relentless quest to eliminate waste, at every level of our operations,’ he writes in an online post. ‘We designed highly efficient Tensor processing units (the AI chips behind our advances in machine learning), and outfitted all of our data centres with high-performance servers. Starting in 2014, we even began using machine learning to automatically optimise cooling in our data centres. At the same time, we’ve deployed smart temperature, lighting, and cooling controls to further reduce the energy used at our data centres.’

The results have been impressive. ‘Today, on average, a Google data centre is twice as energy efficient as a typical enterprise data centre,’ says Hölzle. ‘And compared with five years ago, we now deliver around seven times as much computing power with the same amount of electrical power.’

He writes that by directly controlling its data-centre cooling, Google’s AI-powered recommendation system is delivering consistent energy savings of around 30% on average. ‘The average annual power usage effectiveness for our global fleet of data centres in 2019 hit a new record low of 1.10, compared with the industry average of 1.67, meaning that Google data centres use about six times less overhead energy for every unit of IT equipment energy,’ he adds.

With that 550% increase in output matched by a 6% increase in energy consumption, data centres are quickly becoming the go-to case study for tech-driven energy efficiency.

That said, the South African National Energy Development Institute (Sanedi) is currently working on a relatively low-tech energy-saving initiative, as part of the Kigali Cooling Efficiency programme’s (K-CEP) Million Cool Roofs challenge. Sanedi is one of 10 teams globally awarded a US$100 000 grant to deploy solar reflective roof coating, with the team that demonstrates the best sustainable and transferable model to be awarded US$1 million in 2021.

Lundall has confirmed that the institute’s reflective coating solution can reduce indoor daytime temperatures in low-cost housing by almost 10°C. ‘While the reflective coatings can make life more comfortable for people living in rural areas where there is no access to cooling technology, cool roofing also brings benefits to urban areas,’ she says. ‘Substantial energy savings can be achieved in buildings which make use of mechanical cooling technology [air conditioners], as the intervention reduces base and peak demand for cooling energy.’

She adds that the whitening of 100 m2 of grey roofing can cancel the warming effect of 10 tons of CO2 emissions. ‘Globally, this cancels 500 medium-sized coal power stations’ worth of greenhouse gas emissions.’

Increasingly, as the Cool Roofs project suggests, efficient energy solutions are becoming synonymous with clean-energy technologies. The International Energy Agency’s in-depth Africa Energy Outlook 2019 report shows the potential for this to be true in Africa especially.

Noting that 600 million people in Africa currently do not have access to electricity, the report states that current plans would leave 530 million people on the continent still without access to electricity by 2030 – far short of the development goal of universal access. However, it continues, ‘with the right policies, it could reach that target while also becoming the first continent to develop its economy mainly through the use of modern energy sources. Drawing on rich natural resources and advances in technology, the continent could by 2040 meet the energy demands of an economy four times larger than today’s with only 50% more energy’.

Africa has a unique opportunity to pursue a much less carbon-intensive development path than many other parts of the world, according to IEA executive director Fatih Birol. ‘To achieve this, it has to take advantage of the huge potential that solar, wind, hydropower, natural gas and energy efficiency offer. For example, Africa has the richest solar resources on the planet but has so far installed just 5 GW of solar PV, which is less than 1% of global capacity.’

So when Zimbabwe recently announced that it was working to ensure uninterrupted, efficient energy supply at the country’s airports, it would have come as little surprise that the solutions harness solar energy.

According to Zimbabwe’s then Minister of Energy and Power Development, Fortune Chasi, ‘the basic idea is that airports are a key national installation and we have to have a situation where there is an assurance that there won’t be any power outage there. If there is going to be an outage, it could seriously compromise on safety as well as cause a serious dent on tourism’. This came barely five months after Zimbabwe removed import duties on solar-energy-related products, in the face of 18-hour daily power cuts and skyrocketing power tariffs.

At the 2019 African Utility Week conference, South Africa’s then Energy Minister Jeff Radebe told delegates, quite bluntly, that ‘Eskom alone cannot meet our power capacity requirements, because we estimate that the capacity extension under the Integrated Resource Plan cost in excess of R1 trillion in the period up to 2030, including the new power plants plus the requisite transmission and distribution infrastructure’.

Big businesses across the country immediately started (if they weren’t already) exploring the possibilities around renewable energy interventions. Siemens, for example, had only recently launched an end-to-end distributed energy system (DES) at its headquarters in Midrand, near Johannesburg.

The system includes a 1 MW solar PV power plant, drawing on solar panels mounted to the roofs of carports and buildings around the campus. That captured solar power is integrated into the microgrid controller, while excess energy is stored in a 140 kWh battery. 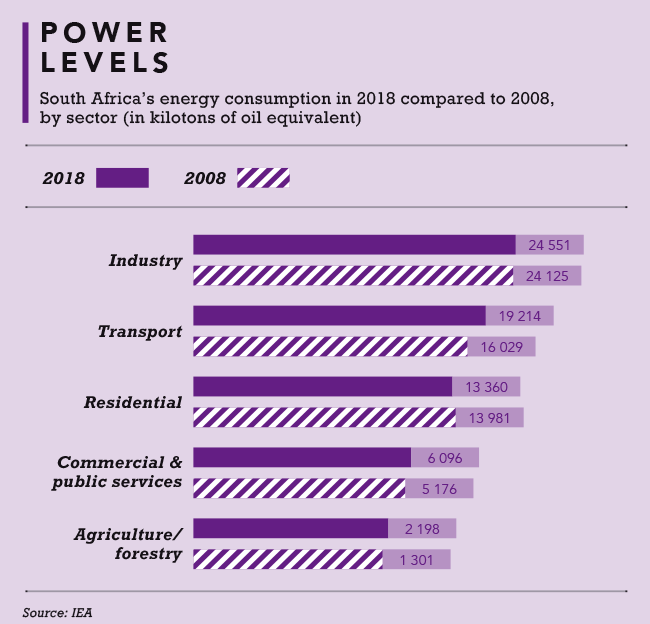 The system is monitored, visualised and controlled via a Siemens-engineered internet of things energy platform. The microgrid has allowed Siemens to cut down its energy usage and costs, while also reducing harmful emissions.

‘The project provides a showcase of a proven Siemens solution that will help save energy, cut costs, lower carbon emissions and ensure uninterrupted power,’ Siemens Southern and Eastern Africa CEO Sabine Dall’Omo said a few months after the launch. ‘Everything from installation to operating costs has been tracked to present a realistic case study for the South African context, and the results to date are convincing. The DES solution installed at our office park serves as an active example of our belief in the solution and the sustained benefits it creates.’

Dall’Omo added that microgrid systems such as the campus’s DES offer the ability to store and exchange power – thereby improving energy efficiency even further. ‘For example, an office park that generates a lot of power during the day could pass on that stored power to a nearby residential community to be used at night,’ she said.

‘Depending on the set-up, power generated by the community overnight could in turn be transferred back to the office park for use during the day. Such relationships between business and communities could result in massive savings across the board and make huge leaps towards a cleaner energy environment in South Africa.’

Cleaner, yes. But more efficient too. Within months of installation, Siemens’ Midrand site was using about 174 000 kWh per month (or 50%) less energy from the national grid than it had previously.

Egypt is building its first inland dry port in a bid to... END_OF_DOCUMENT_TOKEN_TO_BE_REPLACED

Work on the Zimbabwe’s first satellite is nearing completion, with its launch... END_OF_DOCUMENT_TOKEN_TO_BE_REPLACED

Local health authorities have given the go-ahead for South Africa’s participation in... END_OF_DOCUMENT_TOKEN_TO_BE_REPLACED