‘Ensuring that the continent’s SMEs have access to the capital and expertise they need is critical to combating COVID-19 effectively,’ the WEF claimed in June 2020, during Africa’s first wave of infections. ‘African-owned solutions that are adapted to local conditions and create valuable employment opportunities may be the key to mitigating the pandemic’s economic impact. There is even reason to hope that difficult conditions will yield unexpected gems.’

None of this is new information. The Jack Ma Foundation’s inaugural Africa’s Business Heroes competition drew nearly 10 000 applications from 50 African nations in 2019; and the Foundation’s Africa Netpreneur Prize aims to recognise 100 African entrepreneurs and commit to allocating US$100 million in grant funding, training programmes and support for the development of an entrepreneurial ecosystem on the continent.

In May 2021 a study published by AfricArena forecast that African start-ups would attract a record US$2.25 billion to US$2.8 billion in ventue capital (VC) funding this year, despite the setbacks of the pandemic. This year’s VC investment is spread across the continent, in territories that are both expected (Nigeria, US$307 million; Kenya, US$305 million; South Africa, US$259 million) as well as unexpected (Ghana, US$110 million; and Uganda, US$11.3 million). There’s more to come: AfricArena expects VC investment in Africa to increase to between US$3.8 billion and US$4.7 billion in 2022, surpassing US$10 billion by 2025.

At a country level, South Africa’s Township and Rural Entrepreneurship programme (TREP) was recently allocated about ZAR700 million, which will provide financial aid to 24 000 small enterprises – from motor mechanics to spaza shops and shisanyamas (traditional butchers and open-coal restaurants).

As Minister of Small Business Development Khumbudzo Ntshavheni explained in her department’s budget speech, ‘the purpose of TREP is to elevate enterprises in the townships and rural areas previously relegated to the second economy to the mainstream economy, and to further integrate opportunities in townships and rural areas into competitive business ventures’. That funding announcement came at a time when, according to a relatively small Retail Capital survey, more than 80% of South African SME respondents confirmed that they had survived the first year of lockdown. 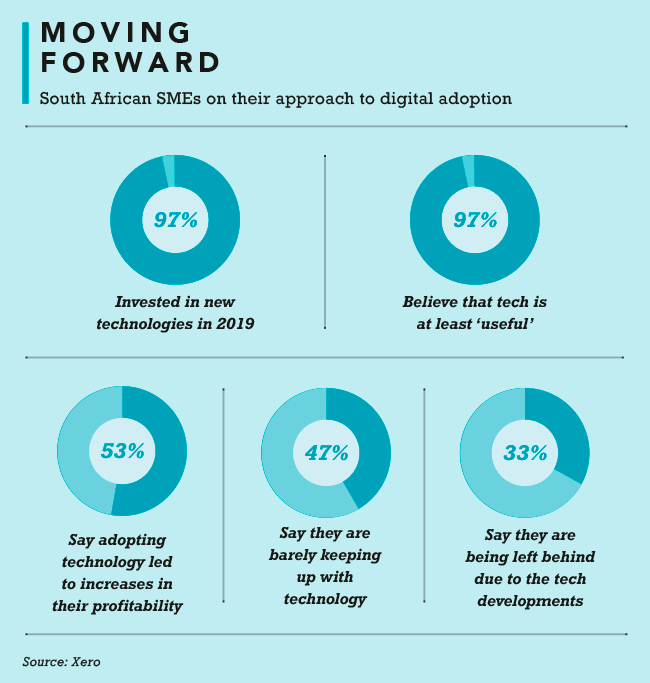 Again, most of that activity is concentrated in the key markets. The 2019 Digital Economy report, compiled by the UN Conference on Trade and Development, found that four countries – Nigeria, Egypt, South Africa and Kenya – accounted for 60% of Africa’s digital entrepreneurial activities. Ghana, Morocco, Senegal, Tunisia, Uganda and Tanzania made up a further 20%; while the rest was shared among Africa’s remaining 44 countries.

‘Significant digital entrepreneurship activity began earlier in Accra, Cape Town, Nairobi and Lagos than, for instance, in Kigali or Addis Ababa,’ the report explains. ‘More and more diverse enterprises exist in those first four cities than in second-tier cities, and the density of innovation hubs and other support initiatives is also higher there.’

But a wave of investment and innovation is coming – and those ‘second-tier cities’ could rapidly catch up with the major tech hubs. Ian Lessem, managing partner at investment advisory firm HAVAÍC, believes that African start-ups have an advantage over their global peers because they compete out of necessity.

‘African innovators face local challenges so pervasive, they simply have no choice but to tackle them head-on and become subject-matter experts in finding solutions for real-world problems like food security, health, education, safety, financial services and logistics,’ he says. ‘While it seems unlikely that the greatest contributions to and innovations in biotech or space travel will emerge from Africa, African founders are paving the way when it comes to creating commercial and innovative solutions to local challenges that also have global relevance. And, crucially, when coupled with technology, they can scale quickly on home ground and abroad.’

What’s more, Lessem believes that African start-ups aren’t limited by a lack of financial resources; quite the opposite, in fact. ‘The hidden advantage in this scenario is that African entrepreneurs and start-ups self-fund and bootstrap for as long as possible,’ he says. ‘This translates to founders having a sharp focus on creating commercially successful business from the get-go. And because it’s their time and money at risk, they have no choice but to make a success of it.’

Lessem points to specific cases such as Nigerian fintech Flutterwave, which recently became Africa’s first unicorn (a privately owned start-up with a valuation of US$1 billion); or Kenyan fintech Tanda, which ‘literally tripled the number of “ATMs” in Kenya overnight’.

No wonder, then, that Minister Ntshavheni recently called on South Africa’s National Youth Development Agency to support 15 000 start-ups by 2024, with a specific focus on tech-driven businesses.

‘We must now support young people in businesses that we call high-risk businesses – such as technology innovations and digital businesses that they are involved in – and other avenues where young people are moving the barriers but with little support, because our support tends to be risk-averse,’ she told a recent NYDA webinar. ‘We need to be bold enough in our support for start-ups, to take more risk and allow our young people to experiment.’

The rewards could be immense. The e-Conomy Africa 2020 report, produced by Google and IFC, found that the continent’s internet economy has the potential to reach US$180 billion (or 5.2% of GDP) by 2025; and US$712 billion (or 8.5% of GDP) by 2050. ‘The African internet economy is one of the largest overlooked investment opportunities of the past decade with potential for profound impact on development,’ the report states.

Echoing Lessem’s remarks, it notes that the pandemic ‘demonstrated that digital start-ups in Africa are able to provide innovative solutions when they are needed most’. It pointed to how public-sector partnerships with private healthcare start-ups have made testing more widely available, while expanding the capacity for medical recordkeeping.

Then, the key line… ‘The continued operation of the informal sector – a major portion of Africa’s economic activity – is supported by e-logistics and e-commerce supply chain start-ups. New partnerships and business models like these will likely continue to influence start-ups across all industry sectors, even beyond the COVID-19 pandemic.’

Small businesses, informal businesses, tech start-ups. It’s a heady mix, and one that’s boosted even further by the start this year of trade in the African Continental Free Trade Area. AfCFTA aims to reduce tariffs on 90% of all goods, facilitating the free movement of goods, services, capital and people across a market of 1.3 billion people.

The newly launched AfCFTA mobile app enables Africa’s SMEs to buy and sell goods via a cashless and contactless platform, with low duties in place and the regulatory requirement of ‘know-your-customer’ fully adhered to.

There’s an app, because of course there’s an app. Africa’s private businesses are, according to a 2019 PwC report, far more open to digital change than their European counterparts. The report, which defines ‘private businesses’ as unlisted and family-run entities (PwC claims they make up 90% of all African businesses), found that 81% of African respondents see digitalisation as ‘highly relevant’ to their future, compared to just 65% in Europe.

‘Leaders of private businesses in Africa may grapple with greater challenges than their counterparts in Europe in certain ways – less developed infrastructure and financial systems, to name two,’ according to Gert Allen, entrepreneurial and private business leader at PwC Africa. ‘But they are ahead of them in one key respect: their embrace of digital change.’

Egypt is building its first inland dry port in a bid to... END_OF_DOCUMENT_TOKEN_TO_BE_REPLACED

Work on the Zimbabwe’s first satellite is nearing completion, with its launch... END_OF_DOCUMENT_TOKEN_TO_BE_REPLACED

Local health authorities have given the go-ahead for South Africa’s participation in... END_OF_DOCUMENT_TOKEN_TO_BE_REPLACED