Internet traffic is up. Obviously. Intuitively you know this to be true, but it’s only when you see the hard numbers that you realise how much – and how rapidly – those volumes have grown. In South Africa alone, local data-centre company Teraco reports that the peering throughput at its NAPAfrica onternet exchange point (Africa’s largest) has grown from 6 Gbps in 2014 to an astounding 1.7 Tbps (or 1 700 Gbps) in 2021. It’s no wonder, then, that Teraco is now looking to expand northwards, reportedly starting with small facilities (between 1 MW and 4 MW) in Kenya and Nigeria. The company already has 73 MW of capacity across its home territory of South Africa, and recently received funding for a further 38 MW in Johannesburg.

Tech rival Liquid Intelligent Technologies (formerly known as Liquid Telecom), meanwhile, recently confirmed US$300 million in investment to fund its expansion across Africa, with Strive Masiyiwa, head of Liquid’s Zimbabwe-based parent company, saying that ‘this money will allow us to expand our facilities in South Africa and Kenya, as well as build new facilities in Egypt, Ghana and Morocco’.

Liquid is looking to build a US$100 million data centre in Lagos that it claims will be Africa’s biggest outside South Africa. As Masiyiwa wrote on Facebook, ‘this is our largest investment in Nigeria since the mobile industry started. […] What is important is not the data centres but the technologies that will be unleashed in Nigeria because of this infrastructure. That’s the big deal here’.

Big deal, yes, and those data centres are a good start. But Africa needs so much more.

At least two-thirds of Africa’s data-centre capacity currently sits within South Africa. Nigeria, Kenya, Egypt and Morocco are catching up, and Mauritius punches far above its weight in terms of size and population. Yet a recent report by Xalam Analytics and the Africa Data Centres Association (ADCA) found that nearly half of sub-Saharan Africa’s broadband connections are served by just 10% of its existing data-centre supply. According to the report, 15 countries have a deficit of between 5 MW and 10 MW of data-centre capacity, while 20 have a capacity deficit higher than 10 MW.

‘The need for hosting capacity is largely structural; an outgrowth of a host of mega-trends that are transforming the region’s economic and social fabric and are putting considerable pressure on existing infrastructure,’ the report states. 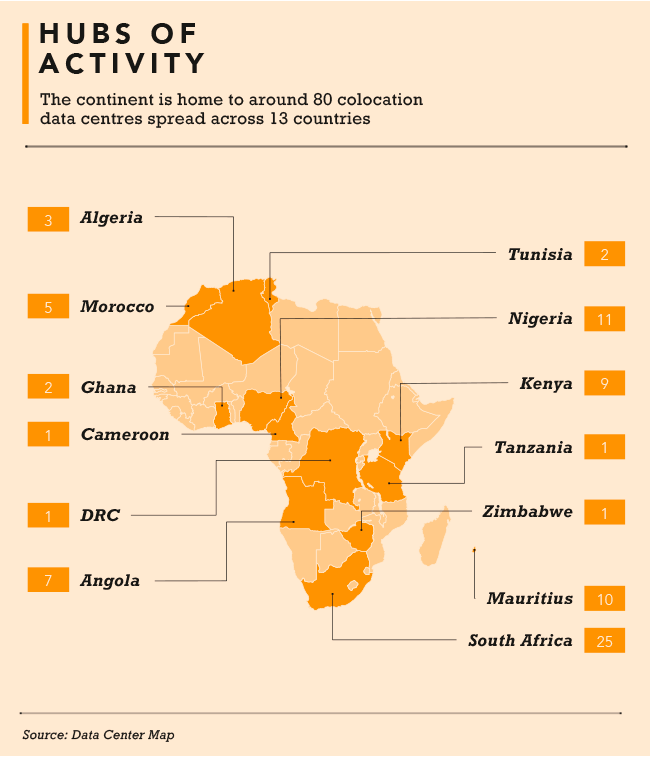 To achieve a data-centre landscape comparable to the current capacity and density of India, the report claims, Africa would have to add an aggregate capacity of at least 120 MW of multi-tenant data-centre capacity over the next decade. That adds up to about 1.4 million m² and about 80 facilities (assuming an average of 3 MW each).

For the entire continent to catch up to South Africa’s level, though, the rest of Africa would need another 1 GW of capacity – or 3.5 million m² across about 700 facilities. That number of 700 got a fair amount of media attention, with many experts saying that it’s not a realistic target given the current limitations in terms of energy, security and expertise in most jurisdictions. But it does provide a useful snapshot of where the continent currently is. Rather than seeing the gap as a problem, some companies are considering it an opportunity.

‘Countries such as Nigeria, Kenya, Rwanda, Côte d’Ivoire, and Togo have benefited from expansive digital-transformation strategies that have attracted investment and development – both of which are closing the gap,’ according to Stephane Duproz, ADCA board member and Africa Data Centres CEO.

‘In addition, we are hearted by the African Union’s Digital Transformation Strategy for Africa, which builds on existing frameworks such as PRIDA, PIDA and AfCFTA to strategise around developing the continent’s digital and economic transformation. Key to this strategy is that the tools of digital growth are developed and owned by Africa.’

To that end, Raxio Group recently announced a 1.5 MW Tier III data centre in Kinshasa, DRC. With its promised 99.982% availability rate, it would have a negligible 1.6 hours of downtime per year. The Kinshasa project is one of three that Raxio is working on, with the other two in Kampala, Uganda, and Addis Ababa, Ethiopia.

Meanwhile, the Old Mutual African Infrastructure Investment Managers (AIIM) Fund announced an investment that would see Onix expanding its Ghanaian data centre; Morocco-based N+One recently confirmed that it would build three data centres across Senegal (including in Dakar’s Senegal Digital Technology Park tech hub); and Nigeria-based MainOne said it was planning to build a 50-rack data centre in Côte d’Ivoire, in addition to expanding its existing facility in Ghana.

MainOne, which became the first Microsoft Azure Peering Services partner for West Africa in 2020, is also believed to have its eyes on a site in Liberia.

‘Rather than specific geographies, the true opportunities lie in examining regulations and commerce – and here the opportunities are vast,’ according to Duproz. ‘There is growing momentum for digital strategies on the continent – the opportunity lies in co-ordinating these strategies into a framework that will benefit vast regions, rather than immediate communities.’

The question remains, however, of how all these new data centres will be kept running. The Xalam/ADCA report emphasises that data centres consume large amounts of water and electricity: two resources that are scarce in some parts of Africa. Duproz says that Africa Data Centres uses ‘advanced greywater systems, allowing our cooling infrastructure to utilise non-potable water, which is recycled and cleaned after use’.

‘Data centres play a significant part in boosting the digital infrastructure that is vital for improving internet access across Africa,’ says Simon Hodson, CEO of Gridworks. ‘However, they can be very energy intensive, so it’s important that they can use green, low-cost and reliable power.’

In another, Amazon is building a ‘utility-scale’ (its words) renewable energy project in South Africa’s Northern Cape that will supply 28 GWh of solar power to its Amazon Web Services (AWS) data centres in the country.

A further 26 similar projects are in the works across the world, in territories including Australia, France, Germany, Italy, Sweden, the UK and US. Amazon aims to deliver a total of 3.4 GW worldwide as part of its goal to run entirely on renewable energy by 2025.

The South Africa project will see Amazon’s electricity ‘wheeled out’ across the national grid. According to Chris Haw, executive director of the SOLA Group (responsible for developing the project), ‘energy wheeling holds tremendous value in that it enables the supply of energy to urban areas that has been generated from energy projects in outlying areas, such as a solar farm located in an area where the sun is most powerful and consistent. This is done through the transfer of electrical power via a utility’s transmission or distribution system between different grid or network service areas’.

Could that be the lasting legacy of Africa’s data-centre revolution? Access to fast, reliable data is very good. That, plus access to sustainable energy, would be even better.

The government of Tanzania has announced the introduction of cage fish farming... END_OF_DOCUMENT_TOKEN_TO_BE_REPLACED

South Africa’s University of the Witwatersrand (Wits) is taking its research into... END_OF_DOCUMENT_TOKEN_TO_BE_REPLACED

South Sudan has installed its first medical-grade oxygen plant in its bid to... END_OF_DOCUMENT_TOKEN_TO_BE_REPLACED