By mid-December 2020, the South African mining industry had recorded 58 fatalities for the year, compared to 51 in 2019 – the lowest fatality rate since records began a century ago. Minerals Council South Africa (MCSA) president Mxolisi Mgojo, delivering a video address recently, called the increase in fatal accidents in 2020 ‘extremely disappointing’.

Despite the slip in stats, the South African mining industry – a sector in which some 451 427 people were employed in 2020 – is working hard towards its goal of achieving ‘zero harm’, says Sizwe Phakathi, head of safety and sustainable development at the MCSA. It is doing this by improving mining methods and technologies, and bettering safety attitudes and practices as part of a people-centred modernisation strategy.

Phakathi says there has been significant progress in health and safety performance over the past two decades. ‘Despite the fact that South African mines are some of the deepest in the world, mining performance rates are comparable with other countries such as the US, Canada and Australia, where most mining operations are shallow and highly mechanised.’ 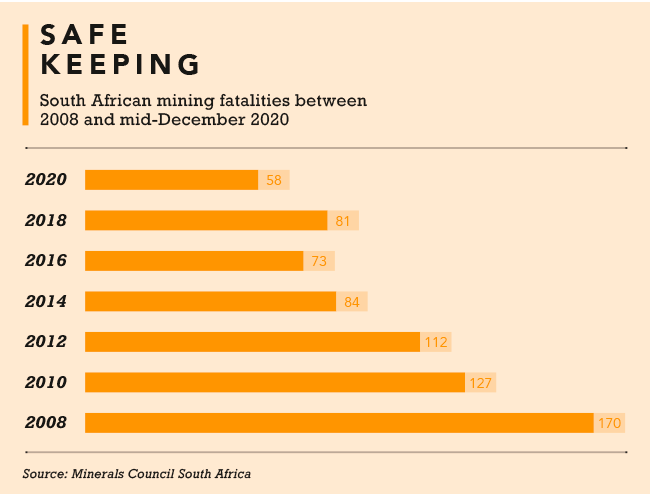 Among the initiatives undertaken at an industry level by the MCSA and its members to improve safety are the CEO Zero Harm Forum and Khumbul’ekhaya. The former was established in 2012 to ensure the mining industry sustains the continuous improvements in health and safety performance experienced since 1993, while the latter is a CEO-led strategy on health and safety in the sector and is aimed at ensuring every mineworker returns home, unharmed, every day. Khumbul’ekhaya began in January 2019 following a heartfelt conversation among 34 mining CEOs and on the back of a difficult 2018 – a year in which 81 people in the industry lost their lives.

Modernisation has a big role to play in increasing safety. While mining is a labour-intensive process, the industry makes use of a wide range of innovations to reduce and prevent health and safety incidents. Key to curbing accidents is the development of mining systems that move miners away from work-face dangers and in-stope health hazards, explains Phakathi. ‘The Minerals Council has partnered with the Research Institute for Innovation and Sustainability, an independent innovation firm, to design a new hand-held rock drill that is lighter, more ergonomic and precise. Other technologies include mechanised drilling and blasting as well as non-explosive rock breaking, which are aimed at reducing underground accidents and eliminating potential risks.’

Additional initiatives have led to the development of early-warning systems for seismic activity, while the Council for Scientific and Industrial Research (CSIR) has developed a pedestrian-detection system that can determine the distance between people, and whether a collision is likely to occur. The CSIR has also been exploring the development of a robot platform with safety-inspection sensors that can enter mines when it is unsafe for people to do so.

Anglo American’s Kumba Iron Ore is reducing work-hazard exposure by introducing various new safety technologies at its operations. Among these are auto-braking trucks, as part of a collision-avoidance strategy to prevent trucks colliding with each other and structures; auto drilling, which allows drill operators to work in air-conditioned cabins away from dust and bulldozers, and which can be operated remotely in risky conditions; and drone technology, which reduces the need for employees to do physical blast clearances.

Kumba also uses state-of-the-art fatigue-management systems to predict exhaustion risk and monitor employee tiredness in real-time. In high-risk areas, the company uses sophisticated prevention, prediction and detection technologies. For example, when a truck driver’s eyes appear to be closing while driving, this triggers an alert to the driver and a notification to the control room. If three alerts are received within an hour, a compulsory stop is enforced. The company’s Kolomela mine has established an on-site fatigue centre where it can measure a person’s tiredness levels and score their alertness using a computer software system called PRISM, and implement countermeasures based on the results. The intention is to replicate this set-up at its Sishen mine.

Eight of the 10 deepest mines in the world are located in South Africa. In late January this year, a new mobile rescue winder was tested at Gold Fields’ South Deep Twin Shaft – this shaft being unique in that it is the deepest single-drop shaft in the world, at 3 km.

The mobile rescue winder was developed in South Africa by Mines Rescue Services (MRS), working with the MCSA and the Department of Mineral Resources and Energy (DMRE). It will allow proto teams (personnel with special training in underground rescue procedures) to access shafts and undertake rescue operations at depths of 3 000m (previously, rescue winders had a maximum depth of 1 200m). It is able to carry six people at once, along with equipment and medical supplies. ‘The new mobile rescue winder puts us in reach of any mining operation in South Africa in the event of an incident that prevents us from bringing our people back to the surface, and will allow us to do so rapidly,’ says Martin Preece, executive VP of Gold Fields South Africa. ‘It’s an insurance policy we hope we never have to use, but feel comforted to have.’

Once the mobile rescue winder has been fully licensed by the DMRE, it will be possible to access employees faster than ever before, in the event of an emergency.

De Beers Group, the world’s leading producer of diamonds, is rolling out advanced driver-assistance systems (ADAS) across its Southern Africa operations. The technology comprises a range of functionality, including cameras to monitor driver behaviour and road conditions. The technology assists drivers by recognising speed-limit signs, monitoring whether there is a safe following distance from the vehicle in front, and detecting whether a seat belt is being worn. The camera software is able to monitor a driver’s eyelid movements and other indicators of drowsiness, and can transmit short video clips to a control room for improved monitoring. It can also register infringements such as changing lanes without indicating, or crossing a solid barrier line.

Jon Andrews, group executive of health and safety at Impala Platinum (Implats), says the company’s safety strategy strives for a safe operational culture and to achieve its vision of zero harm. ‘In FY2020, nine out of 17 of our operations achieved millionaire or multi-millionaire status in terms of fatality-free shifts. In the first half of FY2021, 12 of our of 17 operations had achieved this status.’

Andrews adds that the company’s focus has shifted from monitoring conditions in the workplace to developing a holistic environment that incorporates processes, practices, systems and new technology. ‘In FY2020 we automated our monitoring of key safety-performance indicators and standards for mine managers and teams at two pilot sites. This will assist our people to identify and address hazards and substandard conditions timeously, and this will be implemented at our other operations in FY2021 and beyond.’

Implats continually investigates new technologies to improve both safety and production, according to Andrews. These include technological advances and new equipment, as well as change-management processes around technology or equipment. Several initiatives across the company’s operations test technologies appropriate for risks specific to particular operations. Marula is trialling extra-low-profile dozers for face cleaning and sweeping; Impala Rustenburg has initiated large trials on hydropower drilling and drill rigs; and Zimplats has trialled and is rolling out barring cages, and it’s also busy with mechanical scalers and modified cable bolters to address barring at height risks.

Andrews believes that modernisation has a role to play in improving safety and health, thereby facilitating the quest for zero harm. ‘Modernisation needs to be driven by technological innovation,’ he says. ‘Not all mining operations in South Africa will be suitable for mechanisation; thus research and development is required to ensure continuous improvement of existing conventional operations. ‘R&D can be costly,’ he adds. ‘Stable and predictable mining legislation, together with robust plans and progress in strengthening the economy, would go a long way to increasing investor confidence and result in greater R&D investment.’

Egypt is building its first inland dry port in a bid to... END_OF_DOCUMENT_TOKEN_TO_BE_REPLACED

Work on the Zimbabwe’s first satellite is nearing completion, with its launch... END_OF_DOCUMENT_TOKEN_TO_BE_REPLACED

Local health authorities have given the go-ahead for South Africa’s participation in... END_OF_DOCUMENT_TOKEN_TO_BE_REPLACED