Until the 21st century, the Kingdom of Morocco, like so many former colonies, was heavily dependent on exporting raw materials. While it remains a global top 20 wheat and barley producer, and the world’s biggest exporter of phosphates (used to make fertiliser), Morocco has deliberately set itself on a new development path over the past two decades. Through industrialisation and infrastructure development, it succeeded in growing its per capita income at nearly 3% every year for 20 years before the impact of COVID-19 brought about an abrupt contraction in 2020.

The pandemic coincides with a critical turning point In Morocco. The big question is whether it can become a genuine ‘breakout nation’, achieving sustainable growth for long enough to make a substantial move towards developed-country status. It has a better chance than most other developing countries, especially if can capitalise on its recent industrialisation successes.

Morocco’s ruler, King Mohammed VI, is said to be impatient with the government’s limited vision and drive for reform, and appointed a Special Commission on the Development Model (CSMD) to map the way ahead. He reportedly wants the new model to be ‘daring and innovative’. Late last year, the CSMD appeared to be on course to submit its report in January after an extensive research and consultation period. Although no details have yet been released, it is expected to address the criticism that Morocco’s business-friendly industrialisation model has not adequately spread the benefits of growth to poorer and less-developed communities. The World Bank expects the recommendations to include health coverage for all the North African country’s 37 million people as well as expanded social welfare for the most vulnerable. Others hope it will result in the revamp of the education system to provide the skills required for a more sophisticated future economy.

From an investment perspective, continued streamlining of Morocco’s sprawling state-enterprise sector is critical. The International Finance Corporation wants to see much greater competition and the extension of the (very good) enabling environment for foreign investors to local firms. This would facilitate both the localisation of manufacturing inputs, which has been disappointing, and the emergence of a much more viable small-enterprises sector.

Economic growth and political liberalisation are intertwined in Morocco. King Mohammed VI is a known reformer who responded to the 2011 Arab Spring uprising in North Africa by removing a constitutional clause that declared the monarch to be sacred. He has allowed more fair elections, limited media censorship and acknowledged human-rights violations committed under his predecessor prior to his accession to the throne in 1999. Diplomatically, he has pivoted towards Africa while retaining close links with the US and Europe.

The King is in the process of repairing what had been a complete rupture with most of Africa. The cause was Morocco’s occupation of Saharawi (formerly known as Western Sahara) when the previous colonial power, Spain, pulled out in 1976. Saharawi is recognised as a separate country by the AU. The independence movement the Polisario Front, which administers the rump of the disputed territory (located on the border of Mauritania), appeared to resume a low-intensity armed struggle in 2020 after a 19-year ceasefire. The issue is ongoing despite the recent US pronouncement that it recognises the territory as part of Morocco. Whether that announcement, made in the dying days of the Trump administration, sticks will depend on the as yet unknown views of President Joe Biden’s team.

Meanwhile, the pivot to Africa has been to the continent’s benefit. Morocco is the second-biggest African investor into the continent, after South Africa, and the country touts itself as ‘the gateway to Africa’, following its rejoining the AU in 2017. Moroccan banks, insurers and retail companies have been especially active in West and French-speaking Africa, and the 95% state-owned phosphate giant, OCP Group has been investing throughout the continent in an effort to drive up the use of phosphate-based fertilisers. 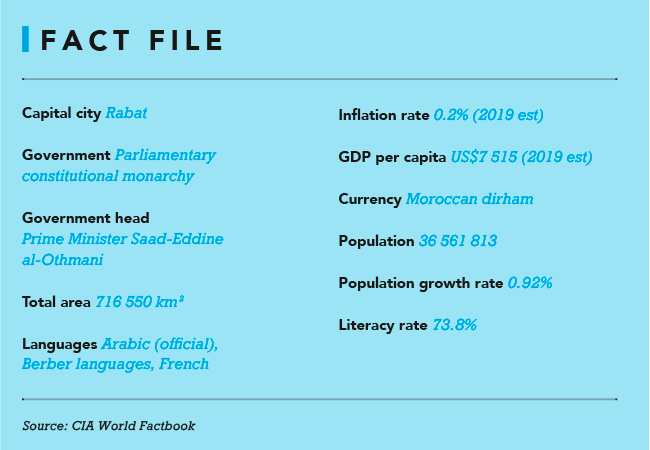 Morocco possesses 70% of the world’s phosphate reserves and is the biggest exporter of the chemical globally. Moroccan-funded fertiliser or ammonia plants are currently under construction in Nigeria, Ghana and Ethiopia. By 2019, OCP’s fertiliser exports to African countries stood at 1.8 million tons – accounting for 58% of total fertilisers sold on the continent. Twenty years ago, Morocco deliberately targeted industrial growth as a development strategy, taking advantage of the country’s proximity to Europe, and its excellent seaports on both the Mediterranean and Atlantic. Tanger Med is the largest port in Africa in terms of throughput. This led to a spectacular growth in industrial products made for export. In 2017, Morocco overtook South Africa as the continent’s leader in automotive production and exports showing an annual average increase of 14.5%.

Foreign investors have been flocking to Morocco. The country’s investment rate has averaged 34% since the mid-2000s, among the highest investment ratios in the world. But Morocco may not be quite ready to break out without further reforms. A World Bank diagnostic suggests that despite high levels of investment, ‘returns in economic growth, job creation and productivity have been disappointing’ over this period.

Most of the sector’s growth has happened since Renault-Nissan established the first of two plants, with a total capacity of 400 000 vehicles a year, in Tangier after 2007. Morocco’s labour costs are notably lower than European competitors, reportedly 73% less than Spain. Renault has been followed by PSA Peugeot Citroën (which opened a 200 000 vehicles-a-year plant in 2019) and China’s electric-car maker BDS, as well as a more than 250 suppliers. Some 90% of the vehicles manufactured in Morocco are exported, mostly to EU member states. The country has a number of free-trade agreements with the EU and ‘associate member’ status. Morocco also has a free-trade deal with the US. The automotive sector is not an isolated example though; other industrial sectors have also boomed during this period. In fact, the performance of the nation’s aeronautics manufacturing has, if anything, been even more spectacular. From almost nothing in 2001, when it employed just 300 people throughout the whole country, it has grown to a 140-company, 17 500-person industry that manufactures components for Boeing, Airbus and Bombardier.

Yet trade agreements and a favourable location – the country lies just 14 km from Spain, across the Straits of Gibraltar – are only part of the Morocco success story. The decision to pursue economic liberalism was deliberate and has been reinforced by reforms to the country’s investment climate. In the World Bank’s Doing Business index, the gold standard for measuring the quality of countries’ regulatory arrangements, Morocco ranks 53 out of 190 nations, placing it third in Africa (behind Mauritius and Botswana). It has steadily climbed the global list since ranking 128 in 2009.

The biggest improvement has been legal protection offered to minority investors with Morocco climbing the table, from a ranking of 164 in 2009 to 37 at present. According to the World Bank, minority investors are better protected in Morocco than they are in Germany. Morocco has also implemented a second leg to its industrial take-off programme over the past two decades, namely infrastructure development. The country is a solar-energy pioneer with the 510 MW Noor concentrated solar power (CSP) plant being the largest of its type in the world. Morocco, which has no oil reserves, intends getting 52% of its energy requirements from renewables by 2030. A call for proposals for a 400 MW expansion was published in January. CSP is significant in that it enables storage of solar-generated power overnight. Other public spending has gone towards improving transport links, notably the high-speed rail links between Casablanca, Tangier and Marrakesh. US$15 billion was invested in basic infrastructure between 2010 and 2015.

The future infrastructure challenge speaks to the issue facing Morocco if it is to take a step up to the next level of development. Much of the infrastructure built over the past two decades was funded from the public fiscus. But Morocco has recently enacted private-public partnership legislation and is now much better placed to leverage private finance. If the country can simultaneously take advantage of the good reputation it has built with the investor community, its economic prospects are likely to soar.

Egypt is building its first inland dry port in a bid to... END_OF_DOCUMENT_TOKEN_TO_BE_REPLACED

Work on the Zimbabwe’s first satellite is nearing completion, with its launch... END_OF_DOCUMENT_TOKEN_TO_BE_REPLACED

Local health authorities have given the go-ahead for South Africa’s participation in... END_OF_DOCUMENT_TOKEN_TO_BE_REPLACED