In 2015, for the first time, investment in renewable energy in developing countries outstripped that of the developed world.

According to research group Bloomberg New Energy Finance, 55% of new investment – US$155.9 billion – occurred in developing countries in 2015, against US$130.1 billion in developed nations. Thus 2015 stands out as the year in which hard-nosed investors proved that renewable energy is not ‘a first-world luxury’ but, on the contrary, integral to the pattern of development.

Attracting private capital is key to Africa’s roll-out of renewable energy-generation projects. But capital only goes where returns are available and tends to be wary of new and untested markets. A mere six years ago, in 2011, there was virtually no market for renewables in Africa. But that was the year South Africa began rolling out the Renewable Energy Independent Power Producer Procurement (REIPPP) programme.

To date, the REIPPP has attracted investment valued at some ZAR200 billion in close to a hundred individual projects. It’s been a catalyst for the ongoing development of a financing market for renewable energy on the continent.

The programme has been critical in attracting funders such as South African pension funds Old Mutual, Liberty and Sanlam – and in enabling financial institutions to deepen their risk-management capacities. John Oliphant, former head of the Government Employees Pension Fund and now chairman of the stakeholder committee that drafted the Code for Responsible Investing in South Africa, points to the critical role of pension funds. ‘Banks are limited in their ability to participate by prudential capital requirements,’ he says. These are the requirements imposed by the Basel series of protocols, designed to limit risk to the banking system. The pension fund sector, however, does not face this constraint.

Oliphant points out that the South African pension industry is sitting on potential investment capital valued at ZAR4.4 trillion. He concedes that pension funds have a low appetite for risk. It is for this reason, he argues, that they are most inclined to buy into renewables investments after the project has reached financial closure ‘during construction and operations, rather than early development’. 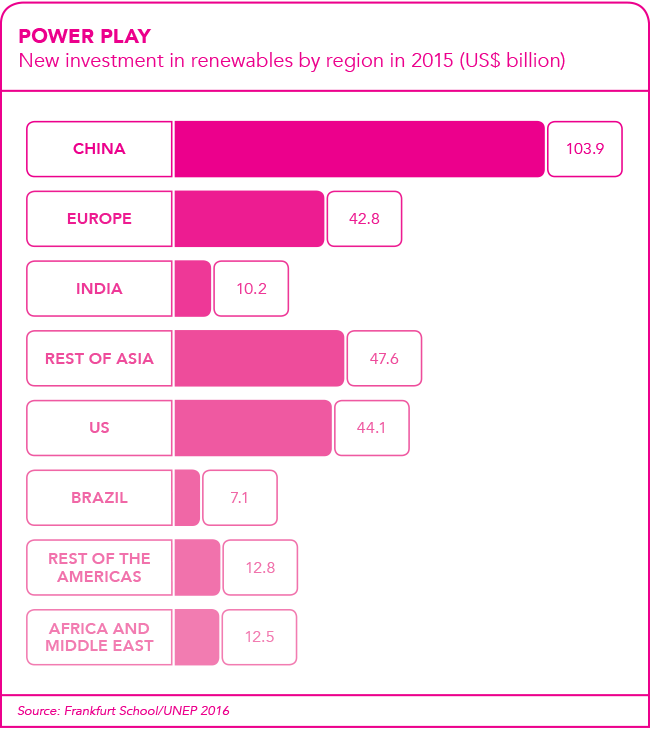 Pension funds look for investments where returns beat inflation by a substantial margin, he says. Returns would have to at least be between 4% and 6% above South Africa’s consumer price index. Oliphant adds that ‘inflation-linked paper is scarce and there is a big demand if it is correctly structured to suit pension funds’.

Jon Duncan, head of responsible investment at the Old Mutual Investment Group, argues that perhaps the most important point about the REIPPP is that it has provided South African institutions with experience when it comes to structuring renewables deals.

Partnership formation is a critical aspect of this. No single fund wants to be the only investor focused on just one or two projects. That would be an ‘irresponsible concentration’ of investment. This explains why all the REIPPP projects as well as most other investments in Africa feature such an extensive sharing of financial liability.

Kenya’s US$694 million flagship Lake Turkana project, for instance, utilises funding from 11 banks and three national governments, as well as the EU.

In a perfect world, pension funds would be able to invest in listed enterprises with a track record of success and which meet the information-openness requirements of an established exchange such as the Johannesburg Stock Exchange (JSE). This is already happening.

Two special purpose acquisition companies (SPACs) have recently listed on the JSE – Gaia Investment Capital (in November 2015) and Hulisani (April 2016) with the sole intention of investing in the renewable energy space. There are vehicles that have no visible assets except cash but then seek to invest in high-growth assets. Duncan regards these as the next step in the development of the market.

‘SPACs are a variation on real estate investment trusts, which are now an established investment vehicle,’ he says, adding that the shift has already happened in developed world markets (including the US) and is currently under way in South Africa, representing a maturing of the local market. SPACs enable the continuous entry and exit of players such as pension funds and thus make the renewable energy market more dynamic and responsive.

However, while South Africa has set the pace, the REIPPP is by no means all that is happening on the continent.

In 2015, energy consultants Frost & Sullivan pointed to opportunities opening up in Côte d’Ivoire, Ethiopia, Ghana, Kenya, Namibia, Nigeria, Tanzania and Zambia. The consultancy flagged what it identified as two of the most critical factors in getting capital into projects in these countries, namely an enabling environment (including a legislative framework) and a healthy project pipeline.

Where elements of the enabling environment are lacking, funders are demonstrating an increasing ability to come up with plans to make things work.

In December last year, Standard Bank announced an innovative scheme that will enable the Ugandan government to hedge the loan it has taken for the 600 MW Karuma hydroelectric power dam. The project, which will nearly double available electricity supply in the East African country, is to be financed mostly by a US$1.4 billion loan from China’s Exim Bank and repaid in two tranches, one at a concessional fixed rate of 2% over 20 years and the other, on commercial terms, over 15 years. It is the latter that required out-of-the-box thinking.

The danger is that interest rates will fluctuate over the lifetime of the loan. Much like a floating mortgage rate for a household, this creates uncertainty about how much will need to be repaid.

The typical way of dealing with this issue is to hedge using a form of derivative known as a futures contract, which effectively ‘locks in’ the future rate of interest. The problem in this case is that Uganda does not have derivatives legislation. However, Standard Bank designed a framework within the existing Ugandan laws of contract that allows derivative terms to be enforced, thus enabling the loan to go ahead at what is effectively a fixed cost.

Standard Bank is especially active in Africa’s renewables financing space. In addition to extensive commitments to South Africa’s REIPPP, the bank underwrote US$100 million of debt for the 340 MW Kpone gas-fired power station in Ghana, and it’s one of three mandated lead arrangers for the Lake Turkana wind farm.

Due to come on-stream this year, the wind farm project is a good example of the complexity of renewables financing in Africa. It’s situated in an area with immense wind generation potential – determined by topography – in a remote region of northern Kenya. The US$6.8 billion, 300 MW project will increase the country’s power generation capacity by nearly 20% and the first 90 MW is expected to be fed into the grid by around mid-2017.

The project was initially led by the World Bank but it suffered a blow in 2012 when the institution decided that the output of the planned wind farm would overshoot demand – in other words, not be used – and thus fail to generate the revenues needed to repay loans.

At that point, other institutions stepped up to fill the gap, led by the African Development Bank (AfDB). Private lenders are generally encouraged by the involvement of multilaterals such as the AfDB, World Bank and International Finance Corporation, as these institutions tend to pick up the worst of the risk and also offer project preparation financing – effectively grant finance used during the planning phase.

Jointly owned by 24 African countries, the AfDB places emphasis on renewable energy as a key aspect of its overall mandate to deliver power infrastructure around the continent. In the case of Lake Turkana, the AfDB was joined by the European Investments Bank, a number of national development agencies from European countries and, again, by Standard Bank – the leading wholly private sector participant.

Another key milestone dealt with political risk. The Kenya government agreed to accept liability for cost overruns resulting from political factors and, in 2017, established a contingency fund to deal with the matter.

The African market for renewables finance continues to mature with a step forward being taken with every new project. The innovation required involves making new markets from the ground up.

Setbacks will, of course, occur – such as in 2016 when South African parastatal Eskom refused to sign off on financial closure. However, measures taken to deal with such obstacles suggest every step backward is met with two forward.

It has become ever more likely that within a few years, pension payouts in South Africa – and further afield around the continent – will be a product of the successful roll-out of Africa’s renewable energy programme.

Egypt is building its first inland dry port in a bid to... END_OF_DOCUMENT_TOKEN_TO_BE_REPLACED

Work on the Zimbabwe’s first satellite is nearing completion, with its launch... END_OF_DOCUMENT_TOKEN_TO_BE_REPLACED

Local health authorities have given the go-ahead for South Africa’s participation in... END_OF_DOCUMENT_TOKEN_TO_BE_REPLACED