In addition, its State of Mobile Internet Connectivity report suggests that this lack of connectivity to 2G and 3G coverage is expected to be the driving force behind telecoms upgrades, an increase in infrastructure and consolidation between industry players across Africa.

The continent’s growing population is also creating major demand for mobile connectivity. The UN’s 2019 World Population Prospects forecasts that sub-Saharan Africa’s population is set to almost double by 2050 – a 99% jump. Recent data by telecoms community platform TowerXchange shows that Africa’s population is growing at 2.7% per annum and is projected to reach 2.4 billion people by 2050 and 4.1 billion by 2100, adding that only 500 million are currently online.

According to its Meetup Africa 2019 report, 3 billion net new connections and a significant increase in geographic coverage are needed to achieve 100% SIM penetration by the end of the century, while the GSMA’s latest Mobile Economy research estimates that by 2025, only 142 million new mobile subscribers will be connected in sub-Saharan Africa. 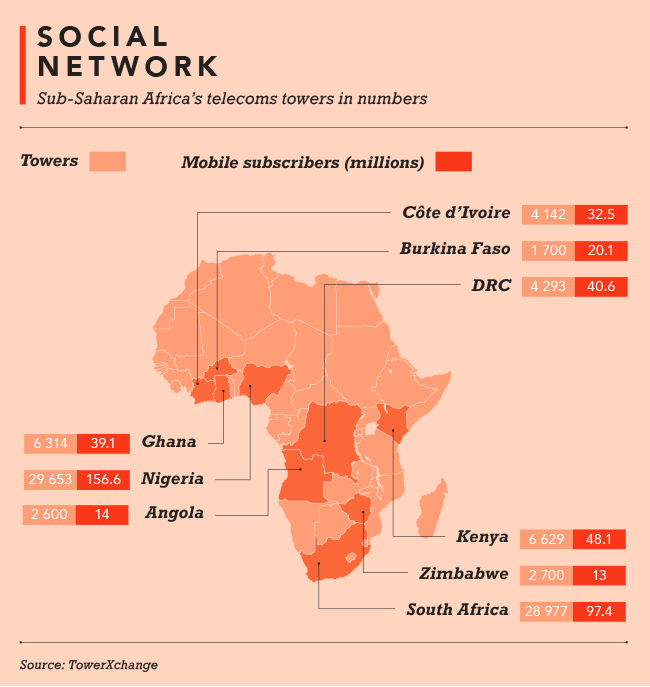 However, infrastructure deployment across the continent’s unserved areas faces several hurdles. The GSMA cites cost as one of them. ‘The average revenue of a rural cell site can be 10 times lower than one in an urban setting, while the cost of building and maintaining network infrastructure in a rural area is often double.’

To counter these obstacles, ‘innovation can play a key role in driving rural mobile broadband coverage’, with the potential to reduce operational costs, says the GSMA. These innovations range from the ‘coverage-as-a-service’ model; revenue sharing; community collaboration on deployments; an ‘energy-as-a-business’ model for connectivity; the ‘operator-as-a-service’ model, in which operators separate infrastructure ownership from service provision; and infrastructure sharing.

Fitch Solutions adds that a growing network demand is an incentive for operators to continue their efforts in bulking up their spectrum assets and collaborating with third-party over-the-top players in different sharing models. In an African Business interview, Pandya identifies markets where ‘mobile technology and data use remain in their infancy’ as motivation to ‘rapidly acquire more towers and enter new markets’, adding that the ‘growth potential for tower operators remains strong across Africa’.

In a company statement, he says expansion ‘provides Helios Towers further geographic diversification into a highly attractive infrastructure market with positive demographic trends and a high demand for advanced mobile and other telecommunications services’. He adds that partnering with local entrepreneurs is ‘an innovative way of entering a new market’, enabling it to meet the needs of South Africa’s mobile network operators and their customers. Plans under its joint venture include the construction of new towers in more than 500 locations. Fitch Solutions expects this trend of consolidation to persist, as ‘operators will seek to increase their scale to offer converged and advanced services’.

Infrastructure sharing – including the passive sharing of cell sites and masts, radio access networks and network roaming – can also reduce the costs of increased connectivity. The latest EMCompass newsletter from the IFC notes that sharing models hold major benefits for consumers and operators by increasing competition between operators, lowering prices and raising service quality. In addition, the model has the potential to ‘reduce investment costs and operating expenses for investors and operators, and increase their balance sheet sustainability’.

In rural areas and developing markets, the model can be used to expand coverage in previously unserved geographic areas via national roaming or by reducing subscriber acquisition costs through sharing sites and masts or the radio access network. The model is also feasible in heavily populated areas – the GSMA states that it can provide additional capacity in congested areas where space for sites and towers is limited.

It could also prove useful for 5G deployment, which to date has been slow across the continent. More recently, South Africa has been identified as a particularly attractive market for development. Its mobile market plays host to four major mobile network operators and nearly 20 mobile virtual network operators. Rain, for example, is a mobile operator that offers data services only – it has launched a fixed-wireless 5G network in Johannesburg and Tshwane.

Vodacom and MTN have been running pilots for 5G tech using spectrum allocated by the Independent Communications Authority of South Africa, according to Reuters. Vodacom has already rolled out a 5G mobile service in Lesotho, and started to introduce 5G mobile services to the South African market this year. The service will be backed by Liquid Telecom’s network, the first 5G wholesale roaming service in South Africa, in turn making Vodacom the first operator in the country to offer 5G to mobile users.

According to Liquid Telecom, the ‘5G wholesale network will also help accelerate the evolution of the Fourth Industrial Revolution in South Africa. Reliable connectivity up to 10 times faster than 4G will allow businesses to harness trends such as the internet of things, robotics and artificial intelligence to innovate transformative new services, increase productivity and deliver more connected customer experiences’.

Once the service is commercially available, subscribers will be able to access it via the new LG V50 ThinQ – the first mainstream mobile phone available via a South African operator punted primarily for 5G. Business Insider South Africa reports that the phone can be bought from Vodacom for ZAR13 600. Fitch Solutions expects consumer adoption of the technology to increase this year, as more 5G-compatible devices are introduced and more spectrum is made available by national regulators.

These developments are crucial, as mobile broadband ‘not only facilitates communication, but also vastly improves access to life-enhancing information and services’, states the GSMA.

‘For most of the world’s population, mobile is the primary way to access the internet, and it is the best technology to reach the underserved, especially low-income populations, women and rural residents.’

Egypt is building its first inland dry port in a bid to... END_OF_DOCUMENT_TOKEN_TO_BE_REPLACED

Work on the Zimbabwe’s first satellite is nearing completion, with its launch... END_OF_DOCUMENT_TOKEN_TO_BE_REPLACED

Local health authorities have given the go-ahead for South Africa’s participation in... END_OF_DOCUMENT_TOKEN_TO_BE_REPLACED