Despite it being relatively new to market, there are many applications for smart-metering technology. And the internet of things (IoT) is taking it to a whole other level, creating a network of interconnected devices that spew valuable data by the minute.

At the very least, smart metering is an easy way for businesses to keep track of how much water or energy they are using. Because the devices record a variety of real-time data on consumption, businesses can gain an understanding of when a resource is being used, how much is being used and where it is going. If necessary, they can adjust usage to suit their budgets. When deployed with a prepaid system, such as in a household, smart meters also allow for a quick and easy recharge using online portals.

There are plentiful benefits for utilities companies or municipalities too. Being able to track usage across a customer base allows them to better determine costs and infrastructure needs and gives an idea of what peak and off-peak usage looks like, enabling better grid management. Irregularities within specific sectors of the grid can also be identified and problems fixed timeously as they arise. Perhaps best of all, the billing process is simpler and far more accurate with a smart system, since there is no longer a need for estimates, as everything happens in real time.

Paul Hudson, a sustainability industry analyst at Frost & Sullivan, says that by combining AI with data analytics, solutions that are to learn from events and provide customised preventive measures in response can be developed. ‘The predictive and prescriptive intelligence not only improves the resilience of the infrastructure but also minimises the damage to the environment,’ he says. He notes that utilities that embrace industrial IoT-based digital transformation will likely adopt a modular approach that can be scaled over time. ‘As every utility has a unique set of challenges, smart solutions need to be first customised and then integrated into a single platform.’

Brighton Mwarehwa, Schneider Electric’s offer and marketing director of power systems business, says that utilities will gain insight and better control by using smart metering. ‘The technology converts the complex dynamics governing the relationship between power generation and distribution on the utility side, and energy consumption, cost and reliability on the consumer side, into timely, easily understood information.’ He adds that businesses can use this data to improve their strategic decision-making.

Thembi Nkadimeng, president of the South African Local Government Association (which represents 257 local governments), when addressing MPs during a debate in February this year, said there is a clear link between the ability of municipalities to pay debt – including that owed to Eskom and water boards – with the inability of municipalities to collect revenue from government, business and households for services delivered. Along with her recommendation to implement credit-control measures, she suggested smart meters be installed to ensure the payment of electricity bills. 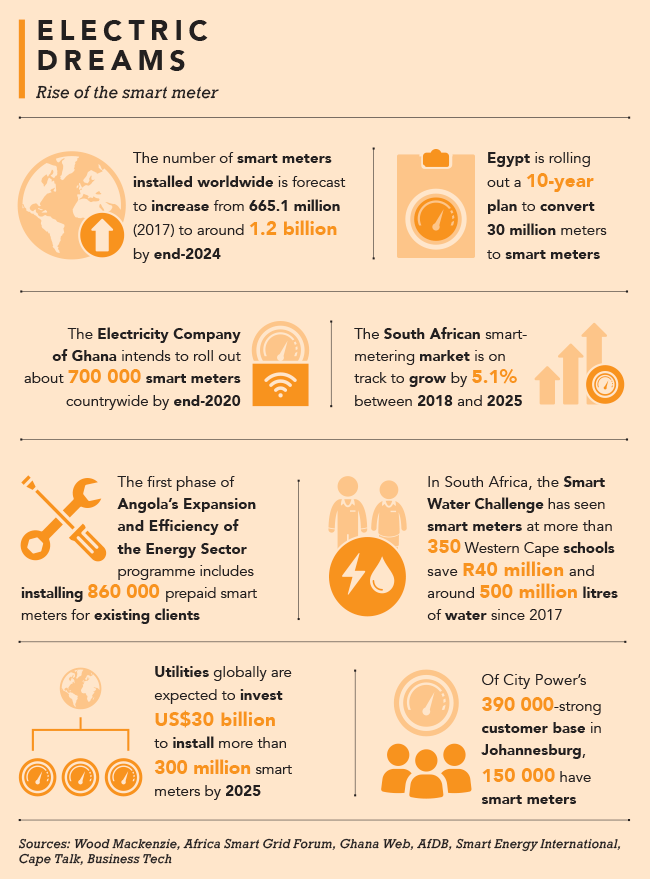 The Buffalo City Metropolitan municipality, which includes East London, Bhisho, King William’s Town, Mdantsane and Zwelitsha, is currently piloting a smart-metering project that has the municipality replacing old meters with smart meters to improve the accuracy and efficiency of billing. The meters also allow for better monitoring of electricity usage through a mobile app, SmartWire, which allows consumers to see their consumption in 30-minute increments.

The aim is to replace meters at about 200 industrial and commercial sites as part of the pilot phase, after which the programme will hopefully be rolled out on a wider scale. The municipality set aside some ZAR355 million for the roll-out of the new smart system and the audit of the electricity meters. The project is expected to run until August 2020.

In the Western Cape, the City of Cape Town is rolling out a free electricity-meter replacement programme across the metro. The upgrade project has been running for the past five years, and the City is down to the last 100 000 credit meters awaiting replacement – thus far, 557 000 customers have been moved to prepaid.

While the new meters are not smart, they do offer numerous benefits, including debt recovery, as any amounts deducted from the prepaid electricity purchases are credited against the relevant account to reduce the debt outstanding.

According to councillor Phindile Maxiti, mayoral committee member for energy and climate change, the uptake has been slow. ‘Currently it is not compulsory, so customers have a choice not to convert to prepaid. However, the old mechanical meters are beyond the end of their useful life, and the City is obliged to replace them,’ he says.

As far as smart meters go, the City of Cape Town has developed and launched an internal application for smart-metered municipal facilities. Called SmartFacility, this web-based tool will provide better access to metered information of electricity and water services for the proactive monitoring and management of consumption at municipal facilities.

To date, the SmartFacility application provides access to more than 500 municipal facilities that have electricity smart meters, and a proof-of-concept is being implemented with the water department to install and monitor data from smart-water meter devices. Smart water meters have been successfully installed at municipal buildings, and the project team is now identifying further buildings to roll out this proof-of-concept to a second phase.

According to Maxiti, the City is currently not considering smart metering for residential use, as there is not yet a national standard for communication. However, smart meters are installed for large commercial customers and are also a requirement for any small-scale embedded-generation customer wishing to feed excess energy back into the grid, he says.

Up into Africa, Egypt is driving smart-meter activity hard, announcing plans in 2019 to install as many as 30 million smart meters in the coming 10 years. Meanwhile, UK-based firm SteamaCo is a provider of micro-grids in Africa that work entirely on SMS. They have also developed a remote, cloud-based payment system that links to M-Pesa, allowing people to pay their monthly electricity bills easily and without the need to leave home. In November last year, the company launched its newest suite of energy automation products, Edge 6, calling it ‘the world’s most data-efficient smart meter’ – ideal for remote and rural users and very frugal in terms of how much data it uses.

The case for smart meters makes yet more sense when considering today’s tech revolution. With regard to harnessing technology such as IoT, connectivity and data analytics, and how these support better infrastructure management, Martin Kuhlmann, a smart-metering specialist at Siemens, which currently offers its metering solutions in Ghana and Botswana, and soon Nigeria, says IoT changes how a utility can understand, measure and control its infrastructure and services. ‘Time to react is in near real-time, and accuracy of management is vastly improved,’ he says. Moreover, the near-real-time nature of smart metering, and the fact that it is centrally controlled, will have a huge impact on revenue collection, he says. ‘Billing can be done via pre- or post-billing, and accuracy is near 100%.’

Mwarehwa calls IoT, connectivity and data analytics the backbone of smart metering. ‘These are critical elements required to successfully implement a smart-metering solution,’ he says. But this all depends on a network system able to deal with the huge volumes of data involved. ‘To fully utilise a smart metering system, a reliable and efficient data network will be required,’ says Mwarehwa. A stable and reliable power supply is another key factor for smart-metering systems – some-thing certainly unreliable currently in South Africa and lacking in many African countries.

Affordability is another challenge. Mwarehwa says the availability of budgets to fund smart metering will hamper efforts, in Southern Africa especially. ‘Although there will be acceleration in South Africa, the growth in other countries will likely be slower,’ he says. ‘African governments are doing their level best to try resolve the available power and may assume adopting smart technologies as a luxury.

‘In some countries they do not even install conventional meters for energy billing and only use estimates. Decentralisation of electricity distribution from the government to private entities may encourage the use of smart metering, as private investors will be interested in having systems that are more efficient and profitable.’ But, in time, smart metering will prevail, says Mwarehwa. ‘Because of the environmental pressures that will force countries to be more efficient, I believe that further into the future we will see the mushrooming of smart systems everywhere in Africa. To have a greener environment and become more profitable, utilities should harness, with urgency, smart-metering systems.’

Kuhlmann agrees, saying that ‘smart metering will be a must, both from a revenue and data perspective. A utility cannot afford to ignore the feature – particularly the benefits and efficiencies it brings’.

African women working in the investment arena have received a US$60 million... END_OF_DOCUMENT_TOKEN_TO_BE_REPLACED

Zimbabwe is growing its status as a battery-minerals hub. The country has... END_OF_DOCUMENT_TOKEN_TO_BE_REPLACED