Kenya is, in many respects, the most pro-business country in sub-Saharan Africa. It has built the continent’s third-biggest economy while nurturing a private sector that is now both mature and robust. Its virtues are currently being tested by the coronavirus pandemic, but Kenya appears to have more ammunition to deal with the crisis than most developing countries.

The World Bank assesses Kenya as having ‘a stable macro-economic environment, positive investor confidence and a resilient services sector’. It argues that the country’s strengths include ‘a growing youthful population’ as well as ‘a highly skilled workforce, improved infrastructure, a new constitution [since 2010] and a pivotal role in East Africa’. Kenya’s own plan, Vision 2030, singles out four areas of focus: manufacturing, universal healthcare, affordable housing and food security.

Prior to the coronavirus contraction, Kenya’s economy had grown at an average rate of 5.5% since the 2008 global financial crisis, rising to 5.7% in 2019. The East African democracy has a diversified economy, especially when compared to most of the continent. It has very little by way of mineral resources – although oil has been discovered in the far north and is currently under development. The lack of mineral resources has placed a premium on the need to develop an enabling environment to make the best possible use of the factors Kenya does have going for it – its people, climate and location.

In recent years Kenya has chalked up notable successes in regulatory reform and infrastructure development. The World Bank’s Doing Business indicator ranks Kenya fourth in Africa, behind only Mauritius, Rwanda and Morocco, and well ahead fellow African giants Nigeria and South Africa.

Kenya’s pro-business attitude has deep roots. The first post-independence government (1963) formulated a ‘middle path’ (between socialism and capitalism), which nevertheless offered incentives to foreign investors alongside its encouragement of smallholder agricultural production. One of the authors of that original policy position, Mwai Kibaki, was later president (2002–08), a period during which significant economic reforms were enacted.

It was under Kibaki’s reforms – notably in tax administration, banking regulation and public finance – that the economy really took off. Growth climbed from 2% in 2003 to 7% in 2007. This was when a pattern of investing 30% of government revenue in infrastructure was established.

The election of Kibaki’s National Rainbow Coalition also saw a return to much more competitive multi-party politics after a long period where the Kenyan African National Union had been entirely dominant. This culminated in Kenya’s new constitution – entrenching much stronger separation of powers between the three arms of government – which was passed by referendum in 2010. 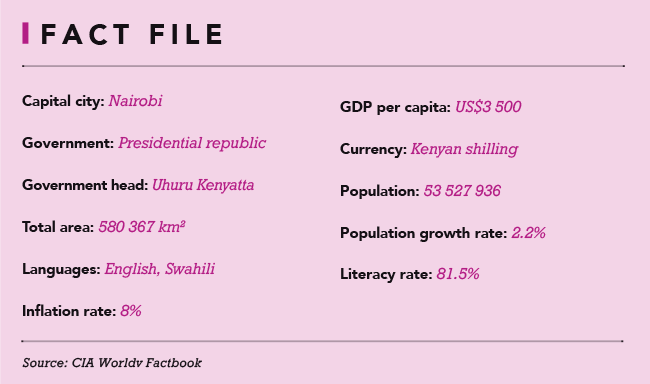 A standout feature of the Kenyan economy is the country’s readiness for and engagement with the high-tech and information requirements of the Fourth Industrial Revolution. For example, five different undersea broadband cables land in Kenya. Among other implications is an extremely fast mobile data connection, with Kenya ranking 14th in the world, ahead of both the US and South Korea.

The strength of ICT in Kenya has seen considerable innovation in the sector. The most famous is the M-Pesa mobile wallet, developed by Safaricom and now used by eight out of 10 Kenyans. And Nairobi’s ICT hub – with its 200 start-up companies and an estimated worth of well more than US$1 billion – is usually referred to as the Silicon Savannah.

The backbone of Kenya’s economy though is agriculture and services. Without minerals the country has had to make the most of what advantages it has – a magnificent growing climate in the highlands around Nairobi and some of the most spectacular wildlife offerings in the world.

A favourable climate means little on its own. Horticultural products have been produced in the Kenyan highlands for a century, but exports only really took off in the late 1980s. Improved air transport links – almost all flowers are exported by air from Jomo Kenyatta International Airport in Nairobi – were an important factor. So too were Asian refugees from Uganda who, after being expelled from that country by Idi Amin, settled in the UK. The family and business network links between this diaspora and Kenya’s 100 000-strong ‘Indian’ community was instrumental in import-export links and enabling Kenyan growers to penetrate UK supermarkets.

Kenya is now the fourth-biggest exporter of cut flowers in the world and one of the biggest producers of roses. The industry is worth about US$1.15 billion annually. Kenya is also the largest supplier of winter vegetables (including peas, green beans, avocados and ‘Asian’ vegetables) to the European market. Horticulture accounted for 21.4% of Kenya’s export earnings in 2018, second only to tea. Tea is the major smallholding cash crop having been grown in Kenya since 1903. In 2018, Kenya was the world’s second-largest tea exporter, after China.

While the drive to develop the manufacturing sector, under Vision 2030, has produced some development (especially in textiles, leather and plastics recycling), it still has some way to go to reach the target of 15% of GDP.

The port of Mombasa is the entry point for a large part of Central Africa, including Rwanda and Uganda. But this is only one part of a web of infrastructure linking Kenya to the world.

A new harbour being developed at Lamu will service the north of the country with links inland to Ethiopia and South Sudan. The first of Lamu’s initial three berths was completed by China Communications Construction Company in August last year and the remaining two were reported to be 70% complete earlier this year. Lamu has the potential for 32 berths when fully developed.

The Chinese involvement in the Lamu development is a significant signal. Kenya is on China’s map as a part of the maritime belt and road development. The current and potential links between Kenya’s harbours and Asia make the country a major site for future Chinese investment.

Lamu is by no means the only logistical development in Kenya. A second container terminal is under construction at Mombasa. This project, scheduled for completion in 2021 will see a considerable increase in Mombasa’s container capacity since 2016, to 2.1 million twenty-foot equivalent units per year. This is about two-thirds of the capacity of Africa’s busiest container port, Durban, in South Africa.

Container capacity is relevant only if there are effective logistical links to the economic hinterland. In Kenya, this is provided by the single gauge railway (SGR), which began operations between Mombasa and the capital, Nairobi, in 2017.

The SGR is one of the country’s biggest-ever infrastructure projects and is intended to terminate in Kigali, Rwanda, after passing through Uganda. Replacing a pre-World War I line built by the British colonial government, it has slashed rail travel time between Nairobi and Mombasa from 10 to four hours. The SGR’s operating model requires 30 freight trains for every four passenger carriers.

It has its critics in Kenya, mostly complaining about cost (US$4.2 billion) and commercial viability. But, like many public costs in the transport space, it will probably turn out to be one of those loss leaders where costs are outweighed by the public good generated.

The government of Kenya has also deliberately set out to overcome one of the major constraints on development in the country – unreliable and inadequate electricity supply. Kenya has traditionally relied on hydroelectric power (dams), which meant supply was subject to variations in rainfall. The country has chosen to facilitate investment in multiple renewable-energy technologies by the private sector.

These projects include Africa’s largest wind farm (310 MW) at Lake Turkana (which came on-stream in July last year) and 745 MW of geothermal power from four generators at Olkaria. Kenya is the first African country to make extensive use of this energy source generated by the movement of tectonic plates. Turkana is said to have saved private citizens US$77.5 million that would otherwise have been spent on diesel generators.

The openness of Kenya’s economy to the world is a double-edged sword. It ties Kenya’s immediate future to a global economy struck by COVID-19. But it has also been critical to Kenya building its own value-adding sectors. So, Kenya will recover from the virus when the global economy does. In the meantime, this exemplar of capitalist development in Africa continues to put in place the infrastructural building blocks needed to service that future.

The first transshipment cargo has docked at the new deep-water Port of... END_OF_DOCUMENT_TOKEN_TO_BE_REPLACED

A US$50 million trade-finance facility has been created to help support Africa’s... END_OF_DOCUMENT_TOKEN_TO_BE_REPLACED