Fifty-one years after attaining independence, Botswana is still often lauded as Africa’s most outstanding success story. In a world where economic growth spurts seldom last more than four or five years it has achieved continuous growth of more than 5% per annum since 1966 – a pace only exceeded by the likes of China – transforming the land-locked Southern African state from the world’s poorest country to a middle-income consolidated democracy. This development feat is unmatched elsewhere on the African continent.

Botswana’s policy-makers have been getting it right for more than 50 years. The diamond-rich nation has developed through the judicious exploitation of its natural wealth, in partnership with the diamond industry’s dominant global player, De Beers, and through a process of reinvesting profits in public infrastructure, health and education. In so doing, it has demonstrated that natural resources are not necessarily a ‘curse’. Combined with the rule of law and accountable government, as they are in Botswana, mineral wealth can deliver sustainable rather than windfall development. It is no coincidence that Botswana ranks best (cleanest) of all African countries in Transparency International’s corruption-measuring index.

However, to advance further the country has to confront a new set of issues and, perhaps somewhat ominously, its future may depend less on its own efforts than in the past. Botswana’s obvious next step is to diversify its economy into manufacturing and services and, in both areas, it is deeply enmeshed in the future of the regional economic structure, SADC. The integration of SADC has been faltering and uneven, which means that trade across borders is still bedevilled by poor administration and non-tariff barriers. Only about 6% of SADC’s GDP is traded across borders.

Moreover, SADC’s economic health hinges on the performance of its one dominant market, South Africa. Botswana has a population of just 2 million people, which means it is too small to support industrial development in the absence of exports. But South Africa’s economic growth has been lower than its population growth for the last three years and it is unable to absorb any future surge in industrial production from its neighbour.

First, Botswana’s policy of sharing growth through public spending showed conclusive results, with the country’s poverty rate (those living on less than US$1.25 per day) falling from nearly one quarter of the population (24.5%) to a mere 6.4%. But at the same time, this was the period where average growth rates fell from in excess of 8% to 3.9%.

Secondly, weak growth in domestic demand was pinpointed as a key factor in the growth slowdown, combined with falling mining revenues. Indeed NDP 11 says that it was only the 5.6% growth in the non-mining sectors that ‘saved the economy from experiencing full-blown recession’. It adds that this serves simply to underscore ‘the significance of continued vigorous efforts to diversify the economy and support of the non-mining sector’. But how is diversification to be achieved? Agriculture offers no way out with just 0.7% of Botswana’s land area being arable. The country grows only about half the food it needs and has to import the rest. Cattle ranching is a traditional activity but, with a national herd of 2 million to 3 million (and beef exports accounting for 2.6% of GDP), there is not much room for expansion.

The success of the diamond industry – 30% of Botswana’s GDP, but more than 75% of its foreign exchange earnings – contains the threat of Dutch disease. That problem occurs where the export of a resource leads to an appreciation of the currency, in turn rendering other sectors, especially manufacturing, uncompetitive. Named for the Dutch experience of the 1950s where the emerging gas industry caused deindustrialisation elsewhere in the economy, Dutch disease is a problem no economic planner has ever really resolved.

Botswana may be best advised to look to its most successful expansion sector after mining – tourism – for appropriate lessons. Tourism, like mining, is a means of exploiting a natural resource and while Botswana has neither beaches nor mountains, it does offer something unique. The vast seasonal wetland of the Okavango Delta is a World Heritage Site, abounding with lions and elephants. It is an ecologically sensitive area but one in which there is now a vast accumulation of experience in managing access and sustainability. The Okavango Delta is not the only wildlife tourism attraction in the country. Of Botswana’s land area, 17% is proclaimed for conservation, with an additional 22% designated a wildlife management area. This includes the world’s second-largest wildlife conservation area, the Central Kalahari Game Reserve, as well as the Chobe National Park. Chobe is especially well-known among tourists who wish to see large African animals.

Although wildlife and ecotourism opportunities have existed in Botswana since at least the proclamation of Chobe in the 1930s, the industry has only been taken seriously as a national growth vector since about 2000. 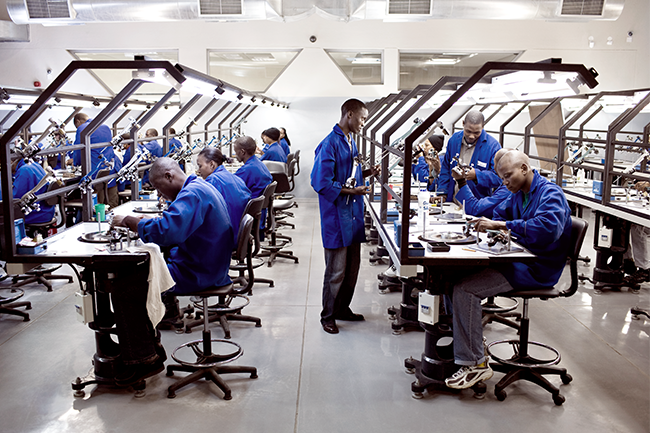 In 2003, the World Bank suggested that ‘apart from its diamonds, Botswana’s major competitive advantage is its diverse and abundant wildlife and natural resources, including the renowned Okavango Delta and Chobe river plains in the north to the Kalahari desert in the south’. At the time tourism accounted for 5% of Botswana’s GDP and about 23 000 direct jobs. By 2016, according to the World Travel and Tourism Council, the sector’s contribution had more than doubled, accounting for 10.9% of Botswana’s GDP and 43 000 direct jobs.

The resources on which the Botswana tourism industry is based do not lend themselves to a mass-based tourist experience. Indeed such an industry would rapidly undermine itself from within. Ecotourism only works if it is exclusive and tailored to high-end consumers. A parallel approach to other areas of the economy will not solve all problems but offers an important clue as to what might be possible.

Gaborone is on its way to developing as a centre for a number of tertiary industries, notably banking, services and the law. The plan to make Botswana a transport hub for the region hinges on the construction of railway lines in two directions: westward through Namibia to Walvis Bay and eastward, linking this via Gaborone into the South African network to Durban and Maputo. Observers suggest a deepened leisure sector and perhaps aviation as potential growth vectors.

In the immediate future, however, diversification for the economy of Botswana probably means doing different things within the country’s mineral hub. So far, mining in Botswana has meant almost exclusively diamonds. But the country has rich coal deposits and plans to develop these are well advanced. The expansion of the Morupule B thermal power station is expected to make the country independent of electricity supply by 2019. Other coal developments are focused on possible exports to the Far East. The country also contains one of the largest undeveloped uranium deposits in the world and a mining licence was granted to an Australian company in 2016.

Although the future is uncertain, there is no need for pessimism. Botswana has strong institutions, a remarkable degree of political consensus and a track record of getting big decisions right. The next part of the country’s adventure is just beginning.

Digital data technology, as well as barcode scanning, will be employed in... END_OF_DOCUMENT_TOKEN_TO_BE_REPLACED

Farmers in East Africa have a free, new mobile tool at their... END_OF_DOCUMENT_TOKEN_TO_BE_REPLACED