On a continent struggling with socio-economic inequality and where many governments cannot meet the development needs of their population, the private sector has been stepping up to fill the gaps. It does this largely through corporate social investment (CSI), which in South Africa alone amounted to ZAR9.7 billion in 2018 – an increase from ZAR9.1 billion in 2017, according to CSI consultancy Trialogue. Overall, companies in South Africa have spent ZAR153 billion (in 2018 real terms) on CSI during the past 21 years.

This comes on top of other corporate expenditure in socio-economic areas such as skills development and housing provision, as well as fulfilling BEE requirements, enterprise and supplier development among them.

The good news is that CSI is becoming more focused, more strategic and more long term. There’s a trend towards integrating CSI into other business divisions, with forward-thinking companies (such as Unilever) even closing their stand-alone CSI department to turn corporate social responsibility into a strategic part of every business unit throughout their operations. ‘The vast majority of companies (96%) indicated that they had a CSI strategy in place,’ says Trialogue in the 2018 edition of its annual Business in Society handbook (previously called the CSI Handbook). It continues: ‘These strategies were most commonly updated every year (38%). Most companies (82%) claimed to factor shared-value thinking into their CSI strategies, in other words that the value of CSI is realised both by beneficiaries and the company.’

Mzila Mthenjane, Exxaro‘s executive head of stakeholder affairs, says: ‘We operate within a greater context of society, and we cannot separate business from community. ‘When drafting the CSI strategy, we consult with the integrated development plans of each municipality where we operate. Our focus areas are aligned with the Exxaro purpose of “powering better lives, in Africa and beyond”, by responsibly investing in commodities that will promote sustainable life on the continent.’

While creating shared value for corporates and communities is relevant for every economic sector across the continent, it’s an imperative for mining companies, as their licence to operate depends on a good relationship with the local host and labour-sending communities. In South Africa, mining CSI frequently overlaps with the social and labour plans, in which companies lay out their commitments towards community development. So it’s no surprise that mining and quarrying companies are the biggest CSI spenders, making up 27% of the country’s total CSI expenditure. 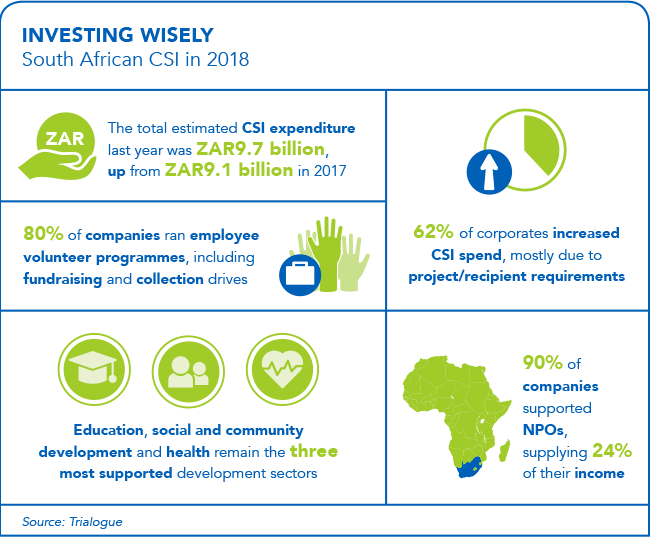 However, companies cannot change the social upliftment of communities on their own, says Tracey Henry, CEO of Tshikululu Social Investments. ‘They are reliant on local municipalities, the broader legislative environment and the economic environment. ‘I have no doubt that many companies are making a positive impact in their local communities in terms of, for example, enhancing quality education or access to quality primary healthcare.’

Mining companies in particular have achieved success in building community clinics and in advancing awareness, prevention and treatment of HIV/Aids and TB, but the top development sector continues to be education. Nearly half (44%) of South Africa’s CSI expenditure is channelled into education, which is supported by 92% of companies.

According to Trialogue, social and community development remains the second-most supported sector and health the third, with 74% and 53% of corporates funding these sectors respectively. These are followed by food security and agriculture, and entrepreneur and small business support. Corporates are increasingly aligning their CSI not only with government frameworks such as national development plans, but also with overarching global initiatives. Thato Mntambo, manager of corporate affairs at Mercedes-Benz South Africa, says the company is forming partnerships with non-profit organisations to align its CSI programme with the UN Sustainable Development Goals (SDGs): specifically Goal 3 (good health and well-being); Goal 4 (quality education); and Goal 8 (decent work and economic growth).

According to Mntambo, ‘our parent company, Daimler AG aligns with the UN SDGs of industry, innovation and infrastructure [Goal 9]; sustainable cities and communities [Goal 11]; responsible consumption and production [Goal 12] and climate change [Goal 13]’. One of Mercedes-Benz South Africa’s flagship CSI projects focuses on the health and safety of truck drivers, with the aim of improving road safety and strengthening the broader road freight and logistics industry. ‘Since 1999, the Trucking Wellness project has evolved into a sustainable model of primary healthcare delivery to key populations through a blend of sleek mobile wellness centres – in Sprinter and Vito vans – and 22 fixed roadside wellness centres, which can be found on all major trucking routes and across South Africa’s borders,’ says Mntambo. ‘During 2017, the project expanded the focus on the facilitation of a Fleet Owner Workplace Wellness Programme, which underpins that the health, wellness and safety of drivers has a far-reaching impact not only on the individuals, companies and the industry, but as a springboard for the upliftment of communities.’

The automobile manufacturer’s long-standing project, which is managed by its NPO partner Corridor Empowerment Project, illustrates how more and more corporates are moving away from spreading their CSI across a wide range of projects in favour of a few hand-picked flagship projects that are closer to their own core business.

Trialogue’s research indicates that 39% of companies focus their CSI on one or two flagship projects, while the majority (76%) have between one and five projects. More than three-quarters of companies (78%) support their flagship projects for at least three years, with 44% supporting them for in excess of five years. This more focused, long-term approach allows deeper engagement and cross-departmental interaction that may eventually lead to systemic change. Pulp and paper company Sappi’s Khulisa initiative is one such example. Founded in 1983 as a CSI tree-farming scheme, it started with three farmers working on 8 ha in rural KwaZulu-Natal (KZN). Today, the project area has been expanded to more than 33 000 ha and provides sustainable rural livelihoods for 4 000 growers and their families. Sappi Khulisa has grown, harvested and delivered nearly 15% of the group’s KZN hardwood timber requirements, valued at ZAR362 million, in 2017.

The beneficiaries receive interest-free loans and a guaranteed future market to supply Sappi’s mills. They’re also paid advances for work conducted throughout the growing cycle, which is generally eight to 10 years. ‘Tree-farming has high barriers to entry because of the initial input costs and long growing cycles involved,’ says Alex Thiel, CEO of Sappi Southern Africa. ‘Growers benefit in terms of skills and income, as do the people they employ to assist in managing their plantations, as well as the many contractors employed to harvest and transport timber.’

The programme has helped establish more than 260 SMEs and created at least 1 700 indirect rural jobs in the forestry value chain. Sappi describes Khulisa as a ‘win-win’ initiative: ‘It promotes shared value, prosperity and skills development among communities, while helping to ensure continuity of fibre supply to our mills. In addition, by educating communities about the environmental aspects of tree-farming, we are helping them to conserve the planet’s resources.’

Dark Fibre Africa (DFA) has rolled out various initiatives over the past few years but skills development is the area that the company feels most strongly about. ‘It is through skills that individuals, communities, and even nations can empower themselves to participate meaningfully in societies and economies,’ says Portia Thokoane, DFA chief human capital officer. She adds that in today’s world, digital skills are some of the most critical, and ‘we need to increase inclusion in sector – particularly of women’.

With this in mind, DFA is launching its IT Women Initiative. Aimed at females from Grade 10 to tertiary level and further, the project will ensure they receive ‘the opportunities and knowledge they need for a future in the telecoms infrastructure sector’, says Thokoane. Another community empowerment initiative that may one day yield a positive impact was announced in September 2018. Sibanye-Stillwater and the Far West Rand Dolomitic Water Association have set aside about 30 000 ha of their own land for a large-scale prototype agri-industrial and bio-energy hub in two local municipalities in Gauteng. As the economic activity in the area is based on mining, the new hub is a way of creating new income streams. The initiative, known as the Bokamoso Barona Programme, will involve local and national government partners.

Santam has also come up with a multi-stakeholder CSI intervention. Its innovative Partnership for Risk and Resilience collaborates with vulnerable or dysfunctional municipalities to strengthen their resilience and response to disasters. The Johannesburg Stock Exchange-listed financial services group has formed strategic partnerships with local government disaster response units as well as NPOs and intermediaries. Working with the South African Red Cross Society, it provides, for instance, fire and flood risk management training to municipal staff and community volunteers.

The thinking behind these initiatives is that stronger, more risk-resilient and self-sustaining communities provide a better socio-economic environment for businesses. While corporates require financial returns on their investment to remain sustainable, strategic CSI will not only contribute to building a better society but also has the power to significantly boost the company’s reputation and overall business.

Ghana has opened its first farmer-owned cocoa fermentation centre. The facility, at... END_OF_DOCUMENT_TOKEN_TO_BE_REPLACED

An initiative supporting efforts to ensure the continuation of education amid the coronavirus... END_OF_DOCUMENT_TOKEN_TO_BE_REPLACED

The Namibian government is rolling out a NAD500 million COVID-19 loan scheme... END_OF_DOCUMENT_TOKEN_TO_BE_REPLACED