When BiotechSA CEO Neil Fichardt talks about energy efficiency, he shares the example of a client that had a distinctly African problem – with a distinctly African solution. ‘This client of ours runs the biggest rhino farm in South Africa,’ says Fichardt. ‘And he’s got a dung problem. He has 1 600 rhinos walking around in a fairly confined space. Their dung is a hazard, but there’s just too much of it to process. He came to us and asked if we could help him go off the grid, because his electricity bill was ZAR300 000 a month. We found a solution where he could go off-grid, using the dung as an alternative energy source.’

BiotechSA is a biodiesel technology and equipment provider, whose clients – like that rhino farmer – need assistance in developing and optimising refineries and secondary operations, or for overcoming specific engineering or process challenges.

Like many companies working in the energy space, BiotechSA has found that, for businesses in Africa, energy efficiency is an increasingly urgent and complex issue. ‘Africa is an energy-poor continent and stands at a crossroads,’ UK-based Ispy Publishing notes in its African Energy Industry Report 2018. ‘Energy is at the core of two very important issues in Africa: ensuring a steady, reliable and sustainable supply for all people in all settings; and facilitating and extending the economic growth that has created opportunities and raised hopes across the continent in the past decade. To address these issues, African countries will have to harness their own vast energy resources.’

The same report notes that while Africa is a continent rich in energy resources, it remains poor in energy supply. ‘With over 130 million households still dependent on other forms of energy such as charcoal, kerosene, lantern, candles, fossil fuels, and another 620 million who do not have access to electricity at all, it is a truism that energy development is moving, but not quickly enough,’ it states.

Some African households and businesses – like that rhino farmer – have looked to go ‘off the grid’, producing their own energy supply, independent of the national or regional electrical energy power grid. However, as Kara Vasey, sales and business development manager at Clarke Energy, points out, ‘it’s a challenge for people to be completely self-sufficient, mainly because it’s a very costly exercise to put in a distribution system. A lot of people in South Africa, for example, want to retain their Eskom distribution, and just back that up in some way’.

Vasey hits on an important point there: across Africa, the challenge is not only about affordable or efficient energy; it’s also about reliable energy. Writing for Renewable Energy World, Ghanaian energy expert Michael Dioha notes that in sub-Saharan Africa, monthly power outages ‘range from around 12.3 [hours] in the DRC to about 32.8 hours in Nigeria. Similarly, in the remote rural areas, many households are extremely poor and cannot afford to refill their gas cylinders and, in some cases, the vendors are not even available’.

He adds that providing reliable energy across the region by 2030 would require ‘the massive expansion of the current electricity generation and transmission capacity’, and huge incorporation of renewables through mini-grid and off-grid systems. ‘Failure to acknowledge the issue of reliability – an under-researched yet highly important aspect of the energy-for-all agenda – could put the energy 2030 agenda of sub-Saharan Africa in jeopardy,’ he writes.

Vasey agrees. ‘Energy efficiency is one thing,’ she says. ‘It’s also about availability and reliability. Every few years in South Africa we go through a period of load-shedding, which lasts about six months. If you’re big in industry, and depending on what your product is, that can really mess up your plans.
‘Look, for example, at making plasterboard, which is a continuous manufacturing process. If that process is stopped halfway through, you will lose all the product. You find the same in the food industries. If you’re dealing with refrigeration or the curing of meats and there’s a power outage, you lose all your product. If you’re in IT and your data centre goes down, it’s disastrous. All these businesses need to have backup reliable power,’ she says.

Traditionally, that backup supply would have been provided by diesel generators. ‘However, the cost of diesel is not cheap, and the operation of a diesel engine is not cheap, and it’s not very environmentally friendly,’ says Vasey. ‘Where people have the opportunity to use gas, it gives them a clean-burn energy, and it offers a reliability they can’t get from the grid.’

Clarke Energy provides the end-to-end design of gas-to-power installations, taking different forms of gas – from natural pipeline gas to biogases or off-gases from processes – and turning that into electrical power.

‘What we often find is people come to us wanting to reduce their electricity bills,’ says Vasey. ‘But then they also want to look at how to optimise their energy efficiency in terms of using the waste energy from a process. We would then take that waste energy that would otherwise be dispersed into the air, capture it and use it to reduce the bill that the customer would have for heating. ‘So for example, if somebody’s paying to run a steam boiler – either by coal, gas or LPG – then instead of having to heat the water to get steam via a traditional fuel, if they use the off-heat of an engine instead, they’ll save the money that they would use on the fuel. Where you have waste products that you can digest in a process to make gas, it’s a free fuel,’ she says. ‘Yes, you have some processes to go through, but it’s a waste product that you’re taking to make fuel, which you can then use to create energy, which you put back into your facility. When it comes to energy, it’s sometimes a matter of cost avoidance as well as cost saving.’ 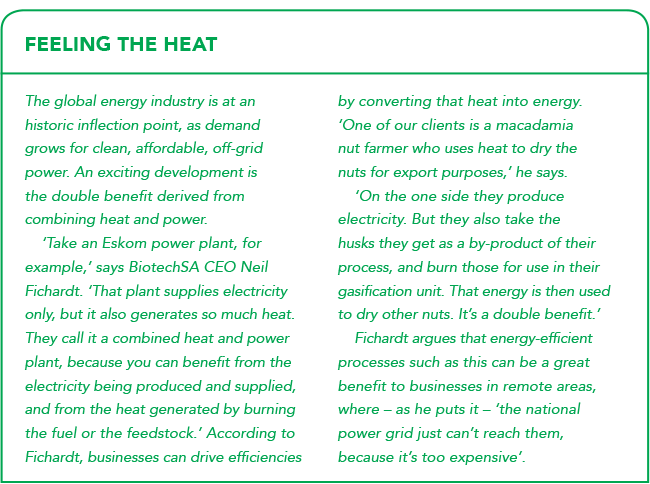 When talking about energy efficiency, one has to look at both sides of the issue. As Vasey says, it’s not only a matter of efficiency in terms of taking all you can get from one source (such as extracting both heat and electrical energy from an engine). It’s also a matter of avoiding the losses you would incur from lack of availability.
‘Everyone always thinks about how much payback they can get on their one gigajoule of gas, or on their litre of diesel,’ says Vasey. ‘It’s also about cost avoidance. Any downtime costs the business significantly. If you can avoid that by ensuring availability, then you’re saving money and you’re being more efficient.’

Clarke Energy distributes Jenbacher gas engines, which offer 91% availability per year. ‘That means the engine is capable of running 8 000 hours without a problem,’ she says. ‘The remainder of 700 hours are for scheduled maintenance shutdowns. From a grid perspective, there’s no guarantee that Eskom, for example, could provide 91% reliability.’

The Ispy report emphasises that reliable and affordable energy is an important factor for industries, noting that unreliable power supply has been one of the obstacles in accelerating economic transformation. ‘More than 30 African countries experience regular outages and load-shedding, with opportunity costs amounting to as much as 2% of their GDP,’ it states. ‘Power shortages are substantial, pushing industrial plants to resort to expensive diesel generators as a secondary source. One in two plants in sub-Saharan Africa considers electricity supply a major constraint.’

The challenge, then, for African businesses is to explore technologies that allow them to get as much as they can out of what they’re burning, while ensuring zero power-supply interruptions and driving down costs. That is energy efficiency in the truest sense of the term. As Vasey puts it: ‘Reliability, availability, cost-saving and energy efficiency all go together.’

Ghana has opened its first farmer-owned cocoa fermentation centre. The facility, at... END_OF_DOCUMENT_TOKEN_TO_BE_REPLACED

An initiative supporting efforts to ensure the continuation of education amid the coronavirus... END_OF_DOCUMENT_TOKEN_TO_BE_REPLACED

The Namibian government is rolling out a NAD500 million COVID-19 loan scheme... END_OF_DOCUMENT_TOKEN_TO_BE_REPLACED