The 2019 Electricity Summit could not have come at a better (or worse) time. Scheduled barely a month after South Africa’s latest Stage 4 load-shedding crisis, the event was only ever going to have one topic on its agenda: Eskom, and the beleaguered South African power utility’s ongoing struggle to provide reliable, affordable, large-scale power.

High-profile delegates at the summit described Eskom as being ‘unsaveable’ and ‘too big, too complex, too staid’; and when Eskom’s Western Cape GM Alwie Lester got a word in, it was to admit that ‘the thing about load shedding is it really doesn’t help anyone. Our systems were never meant to be switched on and off at the rate in which they do’.

In an attempt to solve South Africa’s energy crisis, Eskom announced in October 2018 that it was launching a two-phase, 1 440 MWh distributed battery storage programme to cover the country by the end of 2021. The first phase – taking in KwaZulu-Natal and the Eastern, Western and Northern Cape provinces – will total 800 MWh of battery storage, and will provide peak shaving, frequency support and ancillary services in the distribution network. The hope is that this kind of energy storage, which Eskom has been trialling at its own large-scale testing facilities for some time already, will give more of the population access to electricity, while at the same time allowing for greater integration of renewables and reducing the burden on the grid during times of peak demand.

It’s a simple concept. To deliver uninterrupted power when you’re off the grid, you need to use a battery. And indeed, various large-scale battery storage systems are steadily becoming better and cheaper than they’ve ever been. ‘Energy storage systems reduce the need for back-up capacity from coal or gas-fired electrical generation plants, thereby reducing power sector emissions and help us mitigate against climate change,’ then South African Minister of Energy Jeff Radebe said at the Renewable Energy and Energy Storage Systems Conference held in Cape Town earlier this year. ‘Battery energy storage is undergoing particularly rapid techno-economic advancements, with costs declining significantly,’ he said. ‘The large-scale uptake of battery energy storage would accelerate the stable implementation of cost-effective renewable energy technologies, permit the decentralisation, modernisation and digitalisation of the electric grid, and enable improved electrical power system flexibility, security and affordability.’

Radebe added that battery storage could further support the electrification of transport, encourage small-scale embedded generation and stimulate the deployment of smart- and micro-grids. In that regard, he said, ‘the president of the World Bank committed US$1 billion in September 2018 to accelerate investments in battery energy storage systems in developing and middle-income countries’.

When the World Bank originally made that announcement, Jim Yong Kim – World Bank Group president at the time – called the move a ‘game changer’ for developing countries. ‘Battery storage can help countries leapfrog to the next generation of power-generation technology, expand energy access and set the stage for much cleaner, more stable, energy systems,’ he said, adding that ‘batteries are critical to decarbonising the world’s power systems. They allow us to store wind and solar energy, and deploy it when it’s needed most to provide people with clean, affordable, round-the-clock power’.

In a report on global battery storage markets, Deloitte found that the growth of battery storage generally goes hand in hand with grid modernisation efforts – including the transition to smart grids. ‘Digitising the grid enables prosumer [a consumer who produces electricity and feeds it back into the grid] participation, intelligent system configuration, predictive maintenance, and self-healing,’ according to the report. ‘And it paves the way for the implementation of tiered rate structures – all of which create opportunities for batteries to generate value by adding capacity, shifting load, and/or improving power quality. While smart technologies have been around for some time, batteries help unlock their full potential, and vice versa.’

Battery storage systems are integral to the large-scale implementation of alternative energies such as wind and solar power, simply because the energy harnessed from the sun and the wind can’t be increased or decreased based on demand – say, when the grid is experiencing peak periods. And they’re not just a developing-world solution.

In 2018, GE Power VP and strategic technology officer Eric Gebhardt told the CERAWeek energy conference in Houston, Texas, that the company would build large-scale battery systems to store electricity in the next 10 years. Meanwhile, in the UK, London-based Statera Energy has partnered with Norway’s Statkraft to build a 1 GW battery (complete with a back-up generator fuelled by natural gas), in an attempt to help balance the national power grid. And in South Australia, Tesla recently installed a 100 MW lithium-ion (li-ion) battery (the biggest in the world) – this after an outage in 2016 that left 1.7 million local residents without power. The system is intended as a back-up storage system, designed to kick in during future outages.

Tesla’s Powerwall battery system was also recently installed in Africa, following a trial phase, by Econet Wireless subsidiary Distributed Power Africa (DPA), which is using the technology to power its parent company’s local operations of its telecoms towers. It’s one of the largest deployments of AC-coupled li-ion batteries in African telecoms, with 520 Powerwalls that power a total of 260 Econet sites. The Tesla Powerwall has a built-in inverter, and can be installed indoors or outdoors. ‘We were impressed with the performance of Tesla Powerwall during the trial stage,’ says Econet Energy group CEO Norman Moyo. ‘It addresses the power back-up requirements, offers 100% depth of discharge and has a wide temperature operating range. It also offers real-time monitoring and will help mitigate current battery theft issues being experienced with lead-acid batteries.’

New battery storage technologies such as the Powerwall are enabling utilities across Africa to boost their reliability and efficiency – and, crucially, to increase their capacity. An opportunity now exists to use battery-storage systems as peaking power plants (‘peakers’), which run only during high (‘peak’) electricity demand. ‘New storage and peaker technologies – able to augment renewables during off-periods – present African utilities and renewable energy projects an opportunity to re-invent their relevance as both competitive energy suppliers and attractive destinations for global capital,’ Stephen Barnes, head of power and infrastructure for Standard Bank Group, says in an Engineering News article.

As Barnes explains, the advent of renewable energy solutions – which tap into Africa’s wind, solar and hydro resources – has driven the evolution of decentralised, off-grid solutions. Now, by combining those renewable solutions with emerging storage systems, utilities and energy providers across the continent are finding innovative ways to provide sustained energy to industries and rural communities. Barnes notes that the global capacity for energy storage is expected to reach 8.6 GW by 2022 – enough to power approximately 6 million homes. ‘This presents an obvious opportunity for utilities to partner with or acquire energy storage systems companies,’ he says. ‘These technologies provide a critical lifeline for Africa’s existing utilities to leapfrog into a renewable age of greater efficiently, reduced cost and renewed investment relevance.’ 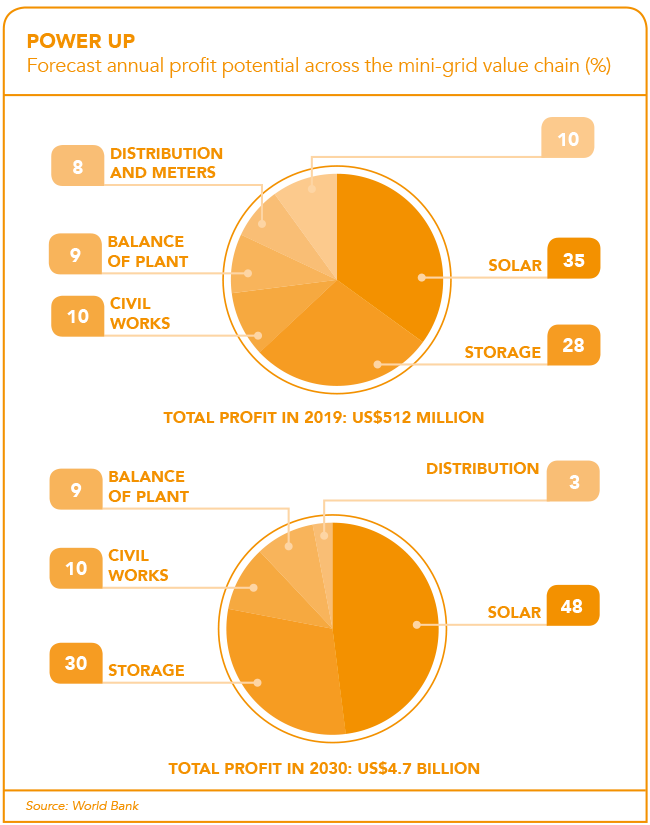 That ties into what the World Bank found: that the 19 000 (mostly hydro- and diesel-based) mini-grids that power 47 million people worldwide today could boom to 210 000 mini-grids, featuring a mix of solar PV and batteries, powering 490 million people by 2030. Cost is one of the biggest drivers of this evolution. According to World Bank calculations, for that 210 000 mini-grid target to be hit by 2030, solar hybrid costs would have to come down to around US$0.20/kWh, compared to the current US$0.55/kWh baseline. Achieving that milestone, it found, would then see the costs of PV modules drop from today’s US$690/kWp to US$140/kWp by 2030; with li-ion batteries going from US$598/kWh to US$62/kWh in the same period.

Battery storage, then, is a win on several levels for economies across the continent. Add to that increased (and flexible) capacity, a reduced carbon footprint and – mercifully, for the sake of anybody who’s had to work through load shedding – increased reliability, whether you’re on or off the grid.

More than 3 000 women leaders of farming co-operatives in Rwanda are... END_OF_DOCUMENT_TOKEN_TO_BE_REPLACED

A 13 km high-voltage power line being built in Zimbabwe is the... END_OF_DOCUMENT_TOKEN_TO_BE_REPLACED

Small and medium-sized businesses in Ghana that are struggling to adapt to... END_OF_DOCUMENT_TOKEN_TO_BE_REPLACED