Studies have shown that as much as 80% of South Africa’s land mass has enough wind resources for low-cost wind energy, its potential being most notable along the country’s 3 000 km of coastline. According to the South African Wind Energy Association (SAWEA), wind energy currently supplies 20 584 GWh to the national grid from 2 GW of operational wind farms – that’s 54% of all renewable-energy contributions.

And things are only looking up for the wind sector, as the 2019 Integrated Resource Plan (IRP2019) bolstered the country’s commitment to exploiting its wind-energy resources with its intention to add an extra 1.6 GW of this renewable energy to the national grid each year from 2022 until 2030, with the installed wind capacity in 2030 envisaged to be 17.7 GW. While this 17.7 GW allocation is second to coal, it is more than any other technology, at 17.8% of the total anticipated capacity allocation.

‘South Africa is clearly transitioning to a cleaner green economy,’ says Ntombifuthi Ntuli, CEO of SAWEA. However, she adds, the IRP2019 is only the first step in delivering new power into the grid.

‘Thereafter, the industry will wait for a request for proposals; bid window five of the REIPPP [Renewable Energy Independent Power Producer Procurement] programme; the announcement of preferred bidders; and the financial closure period, which takes about 12 months, before the power purchase agreements [PPAs] are signed. [Then] construction can commence, with new projects reaching commercial operation date within 18 to 24 months.’ 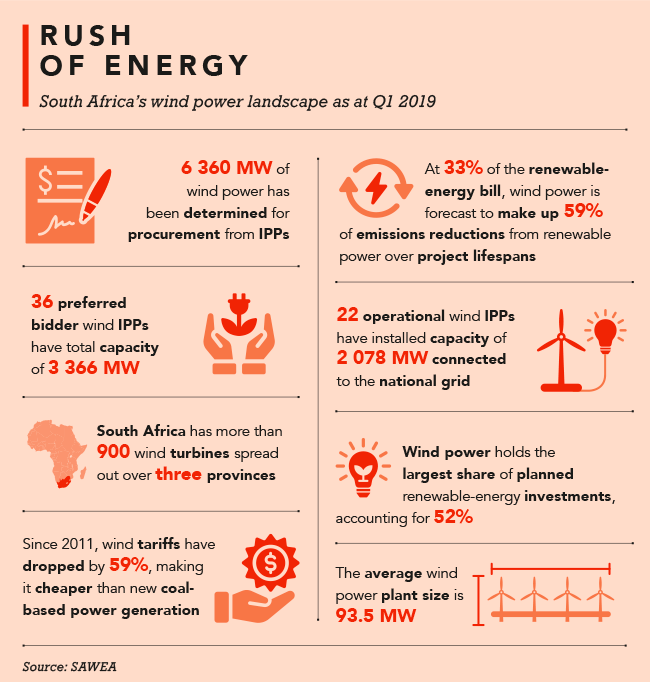 Chris Ahlfeldt, energy specialist and founder/owner of energy consulting services firm Blue Horizon, believes the biggest change the wind industry has experienced lately is the national government’s support, clearly demonstrated by the sector’s share of new capacity to be built in the IRP2019. ‘The updated IRP and government plans for reform of the electricity sector are a welcome change after the multi-year delays in decision-making for the energy industry during the state-capture era,’ he says. ‘These new plans still need to be implemented for the country to realise the benefits, and hopefully this can be done quickly.

‘Eskom has announced plans to procure 360 MW of distributed battery storage at 18 of its substations across the country over the next couple of years. While the utility is still dealing with financial challenges, a loan for this procurement has already been provided by the World Bank and other funders from a concentrated solar project that was never built. This is a positive sign – Eskom sees the benefits of working with the private sector to deploy more storage on its network.’

Wind farms are one of the cheapest electricity sources the country can build. As much as 6 360 MW of wind power has to date been determined for procurement from independent power producers (IPPs). There are currently 36 preferred-bidder wind IPPs with a total capacity of 3 366 MW in South Africa. Since the inception of REIPPP, wind tariffs have dropped by 59%, making wind prices cheaper than new coal-based power generation.

To date, 22 wind IPPs have started commercial operation, contributing 2 078 MW of installed capacity to the national grid, with no fewer than 900 wind turbines spread over three provinces.

South Africa already has several large wind farms in operation. The Loeriesfontein II and Khobab wind farms are sister projects located on neighbouring properties. With a combined generation capacity of 280 MW, and 61 wind turbine generators (WTGs) each, they make up the largest single expanse of turbines in the country. Collectively, these farms power around 330 000 South African households.

Construction started on the Nxuba wind farm, in the Eastern Cape’s Amathole district, in early 2019. Enel Green Power RSA (EGP RSA), developer of the farm, is employing innovative tools and practices in the building of Nxuba, including advanced digital platforms and software solutions to monitor and remotely support site activities and plant commissioning, as well as digital tools to perform quality controls on-site, and smart tracking of wind-turbine components.

The other projects awarded to EGP RSA in round four of the REIPPP tender in April 2015, all of which started construction during 2019, include the Oyster Bay, Garob, Karusa and Soetwater farms. The Oyster Bay and Garob projects are expected to be fully operational during the first half of 2021, while the Karusa and Soetwater farms are due for completion by the end of 2021.

With an anticipated commercial operation date of April 2021, the Roggeveld wind farm will generate enough electricity annually to meet the needs of more than 49 000 households. According to developer G7 Renewable Energies, ‘Roggeveld is to date the wind farm with the lowest-ever electricity tariff to have achieved financial close in South Africa’.

In neighbouring Namibia, the National Integrated Resource Plan calls for 149 MW of wind energy to be developed by 2035. And the country is rising to the challenge. NamPower announced its plans in late 2019 to build two wind farms near the coast in the Tsau //Khaeb (Sperrgebiet) national park, in the country’s southwest.

The first wind farm will produce 40 MW of power through 16 wind turbines, and boast an investment amount of US$68 million, while the second, which will be developed as part of a public-private partnership, will produce 50 MW of power. This power will be sold to NamPower under a PPA.

In East Africa, Tanzania recently announced that a 300 MW project, the Miombo Hewani wind farm, will be built in the southwest. The project will require a total investment of US$750 million, making it the largest wind power project in Tanzania. Construction is due to commence soon. The country also has plans to develop four onshore wind-energy projects with a total capacity of 550 MW.

Meanwhile, in the Horn of Africa, a 60 MW wind farm is being developed in the Ghoubet area of Djibouti in what has been called a landmark investment. The project, which kicked off in 2017, is due to begin commercial operations in 2022. It is part of the East African country’s intention to transition to electricity production that is 100% renewable-energy based.

Meanwhile, Africa’s largest wind farm, the Lake Turkana wind power project, a 310 MW facility, was officially inaugurated in March 2019. The project consists of 365 turbines, each with a capacity of 850 kW. It is located 600 km from Nairobi in the Loiyangalani district, Marsabit county. The project took four-and-a-half years from commencement to completion.

Back in South Africa and looking to the future, Ntuli says she is expecting a series of events that will result in the ‘revival of the wind-energy sector in South Africa’ – once the ministerial determination is issued. These include the announcement of the request for proposals for new-build capacity, the announcement of the preferred bidders, and a financial closure period before PPAs are signed and construction commences.

As South Africa moves to cleaner energy sources, there are several growth opportunities that can be realised in the economy, notes Ntuli. The massive decommissioning of old coal-fired power plants over the next 10 years, as these plants reach the end of their life, will open a capacity gap of more than 12 GW. IRP2019 also sets a positive tone for the growth of the wind-energy sector. New generation capacity from wind energy will have positive spin-offs for the economy, as this capacity is expected to attract more than ZAR300 billion in investments, create jobs across the industry value chain and deliver cheap electricity to consumers, she says.

‘By harnessing the power of wind, South Africa has achieved much more than improving its energy security situation. But, for the industry to grow, policy certainty and leadership need to be demonstrated by government to drive the return of investor confidence, both foreign and domestic.’