From small beginnings, the past five years have seen the development of what may once have been considered an unlikely union. On the one hand, the mining industry – a foundational element of most economies (and African economies in particular) but previously not often associated with sustainable energy. On the other hand, a range of renewables consultancies and engineering firms that work at the cutting edge of sustainable energy technologies for heavy industry, and which are now forming close partnerships with the mining sector.

In fact, Africa’s mining houses are turning into some of the most enthusiastic adopters of renewable or hybrid energy solutions and, in the process, are evolving new cost-saving models that are likely to shape the future of most mining projects on the continent.

Beyond the potential reduction in carbon emissions and improvement of a mine’s environmental footprint, there are a number of other increasingly clear benefits for some mines. For the many mines located away from main electricity grids across the continent, or those that depend on erratic national supplies, hybrid solutions can offer reliable power for day and night operation. But even for mines with less precarious power, hybrid plants now offer significant savings on an operation’s fuel bill, to the extent that those that are not considering this option risk losing a competitive advantage.

The rapidly increasing potential of hybrid solar power (and also pure solar) for mining in Africa has been driven to a large extent by improvements in the underlying technology. The cost of solar panels has fallen steeply, while their area efficiency has increased, and new ways have been found of linking them to other sources of power. Operating an effective hybrid solar plant requires the solar side of the installation to constantly communicate with the alternative source of generation, which usually means a generator set running on fuel oil (diesel).

In the past decade, advances in the technologies that enable intelligent communica-tions between the two sources have allowed solar to take up an increasing proportion of the overall load, replacing substantial fuel use in a given installation – meaning a minimum of 20% reduction in the mine’s generation fuel costs. The design of solar PV plants has also enabled them to become increasingly modular and mobile, opening them up for use in exploration and project development, as well as for producing mines.

At the same time, the technology for high-capacity battery storage has also advanced to a point where battery arrays can dependably support solar to displace an even greater share of a mine’s fuel oil requirements.

The uptake and spread of these broad areas of technological innovation have been further driven by innovation in financing, allowing companies to avoid the heavy capital expenditures associated with earlier builds. Many operators now rent hybrid plants to a mine (with technical support included), or will negotiate power purchasing agreements with a mine while fully operating the plant themselves. The cost of solar power in particular has fallen to a point where it can rival dollar/kWh rates for national grid electricity in some African states – for example in Zambia, where the state recently received tenders for grid-scale solar at a kWh rate well below both grid costs and fuel prices.

As Thomas Hillig, MD of German micro-grid consultancy THEnergy, has noted in comments to renewables industry publication PV Magazine, the mining sector is leading the way worldwide in integrating renewables and battery installations with their existing generation. In Africa and Australia, solar is by far the most popular additional energy source, although there have been some moves towards wind. On the West African coast in Mauritania, the state iron producer SNIM has operated a 5 MW diesel-wind hybrid plant since 2015, saving approximately 5 000 tons of fuel and reducing carbon emissions by almost 12 000 tons each year. 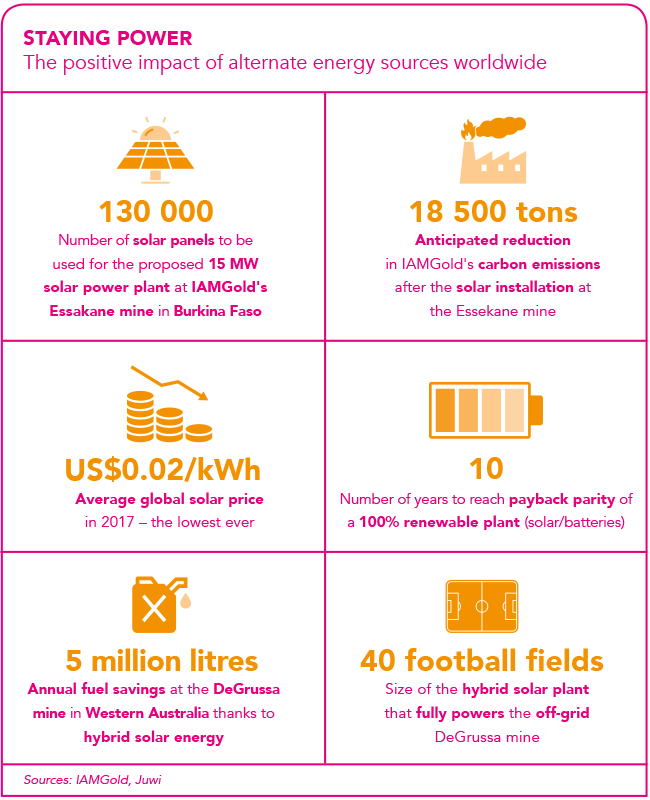 In terms of solar hybrids, things have come a long way since the continent’s first megawatt-level installation, which began production in 2013 at Cronimet Mining’s chrome operations in South Africa. Also in Mauritania, SNIM has commissioned a 3 MW solar facility, and there are numerous other mines that run hybrid solar plants of between 0.5 MW and 1.5 MW.

However, these plants are likely to be dwarfed by others in the pipeline. Currently, the world’s reportedly largest hybrid solar plant runs at the DeGrussa copper/gold mine in Western Australia, operated by Sandfire Resources. The installation was handled by multinational renewables firm Juwi and comprises an array of 34 000 solar panels providing 10.6 MW, in tandem with a 6 MW lithium battery storage facility linked to a 23 MW diesel generator – cutting carbon emissions by more than 12 000 tons, and providing 20% of its power.

The DeGrussa installation may not hold its world-leading title for long. Earlier this year, Nevsun Resources signed an agreement with generation rental firm Aggreko for the installation of a 7.5 MW hybrid solar plant at its copper-zinc mine in Eritrea, to be linked with 22 MW of diesel generation capacity – one of a number of large-scale hybrid projects in development.

On the other side of the continent, in Burkina Faso, leading gold producer IAMGold has recently broken ground on construction of a far larger 15 MW hybrid solar plant, to be owned and operated for the mine by EREN Renewable Energy, a company part-owned by oil major Total. IAMGold’s installation, located at the productive Essakane mine in the north-east of the country, will include 130 000 solar panels linked to an existing 55 MW heavy fuel generation facility, making it the largest solar-diesel hybrid plant worldwide.

There are other major mining renewables installations on the way – including two 20 MW pure solar facilities announced by South Africa’s Gold Fields earlier this year, which will be built at the South Deep gold mine in the Gauteng province.

‘Renewable power plants can be deployed close to the source of demand, through micro-generation, and at a locked-in price, over the long-term,’ according to Dinesh Buldoo, director of transmission and distribution at engineering service WSP Africa. ‘These projects can also potentially assist the mine in meeting some of their social commitments to stakeholders on re-investment and driving socio-economic development.’

There are different business models that are being explored and used, he adds. ‘For instance self-generating; self generating while also powering communities; net metering – where the mine sells any excess capacity generated by the renewable plant into the local grid; and industrial pooling – where a group of companies collectively fund, build, and operate a shared plant.

‘Currently in Africa, we are starting to see more take up in the first two models mentioned here. To my mind, micro-generation and hybrid solutions have a key role to play in powering African mines in the future.’

Juwi South Africa, a subsidiary of the Juwi Group responsible for the DeGrussa plant and a number of other installations in various sectors, has more than 1 GW of wind and solar projects in South Africa that are already fully developed and ready to move into a financial close phase. The company is currently expanding into the rest of sub-Saharan Africa, with a specific focus on hybrid solutions for the mining sector.

According to Juwi South Africa CEO Greg Austin, the company is working on a number of significant mining projects in Africa and elsewhere.

‘From this office, we’re currently looking at 25 MW and 15 MW solar hybrid projects on the continent, among other smaller projects on mines. It’s all well and good having a project in Australia, but people want to go and kick the tyres on a real project in Africa – so it’ll be great to have our first project at scale here. DeGrussa represents one extreme of what is possible. It’s a pure off-grid mine – it’s totally reliant on diesel, solar and batteries. Even if the mine power drops off for an hour, then it’s a day to bring it back online again, so clearly the system has to work.

‘In some African mines, there is a national grid that supports the mine but it’s often quite weak, so there it will be what we call a “behind the meter” connection, with two clear benefits for the miner – it’s cheaper and it improves the quality of their supply.’

What is particularly interesting is the longer-term potential of renewables and hybrid generation in Africa. As Austin points out, there may come a time when almost all aspects of mining activity are powered this way, generating savings at a scale not currently anticipated.

‘We’re seeing that as the mining companies become used to things and find that this technology works, they are starting to expand their planning for electric vehicles too – for all possible machinery moving to electrical power.

‘The outcome is that we can imagine a mine going completely in that direction – a situation where miners may no longer have to import fuel to run most of the equipment.’

An African screenwriters residency incubator has partnered with Netflix to create a... END_OF_DOCUMENT_TOKEN_TO_BE_REPLACED

African countries are betting on a cloud-based health-management system to track COVID-19... END_OF_DOCUMENT_TOKEN_TO_BE_REPLACED

A system using satellite imagery to predict electricity consumption has been launched... END_OF_DOCUMENT_TOKEN_TO_BE_REPLACED