The world’s total renewable-power capacity is set to expand by 50% between 2019 and 2024, the International Energy Agency notes in a 2019 market report on renewables. And solar PV will take the lead. In fact, earlier estimates suggest solar energy could account for as much as 16% of total electricity production by 2050.

South Africa is well endowed with various sources of renewable energy, key among them wind and solar. Indeed, solar – both PV and concentrated (CSP) – has become a crucial component of the country’s renewable-energy mix. Government wants to maximise this, with the IRP2019 stating that an added 6 000 MW of solar PV should be procured by 2030.

‘South Africa’s solar-energy resource is very significant. It is one of the highest in the world,’ says Dinesh Buldoo, director of transmission and distribution at WSP in Africa. South Africa has an annual global solar radiation of about 220W/m², he explains, compared to approximately 100W/m² in Europe and 150W/m² in the US. ‘As a result of us having sunshine all year round, we have approximately 2 500 hours of sunshine per annum. South Africa’s Northern Cape province possesses one of the most attractive solar resources in the world.’

Yet despite South Africa having some of the best solar resources in the world, solar PV and CSP still provide less than 3% of the country’s electricity. According to Niveshen Govender, COO of the South African Photovoltaic Industry Association (SAPVIA), almost 2 300 MW of solar PV has thus far been procured through the country’s Renewable Energy Independent Power Producer Procurement programme (REIPPPP). ‘All 60-plus solar PV projects built under the REIPPPP have been done on time and within budget,’ he says. With seven bid rounds, South Africa has a reliable blueprint for solar farms, thus making the technology replicable and scalable, he adds.

One of the biggest solar projects to come on-line last year was the ZAR12 billion Kathu solar park – Africa’s largest CSP greenfield project in operation. Located in the Northern Cape and spanning 4.5 km2, with 384 000 mirrors, it makes use of cutting-edge energy-generation and -storage technology. The state-of-the-art plant is equipped with a molten salt energy-storage system that allows for 4.5 hours of thermal-energy storage. Built in under three years, Kathu adds 100 MW to the grid – enough to power 179 000 households in the local community. 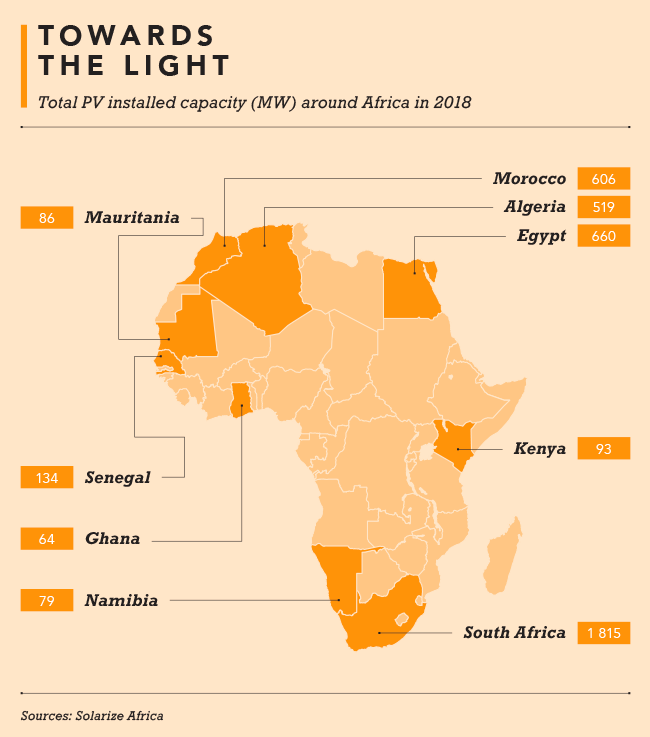 Another, more recent, addition to the national grid is the Droogfontein 2 solar park situated near Kimberley in the Northern Cape, a project developed by Juwi Renewable Energies. The 86 MW solar PV plant covers a 179 ha area comprising more than 260 000 solar panels on a tracker system. Juwi’s other two solar projects – the 86 MW Waterloo solar park near Vryburg in the North West province and the 78 MW Bokamoso solar park situated near Leeudoringstad, also in North West – are still under construction.

Independent solar-power producer Scatec Solar has more than 800 MW in operation on the continent. Of this, 362 MW is already in operation in South Africa, with a further 86 MW under construction. Among its already operational solar projects are the Kalkbult, Dreunberg and Linde plants, completed under the first two bidding rounds of the REIPPPP.

Scatec Solar was the first solar-power producer to connect to South Africa’s grid, which it did with its Kalkbult plant in late 2013. Situated in the Northern Cape, Kalkbult is one of the largest solar plants in South Africa. It has a 75 MW capacity, powering around 35 000 households. The company is currently completing the third and final phase of its three-facility Upington solar-complex project – with all three of these closely located developments being awarded under the fourth round of the REIPPP programme.

Sirius was the first to become commercially operational, on 18 February this year, with Dyason’s Klip 1 connecting to the grid a week later. With two of the three plants now in operation, capacity of 172 MW (enough to power about 80 000 households) has been connected, out of an anticipated 258 MW total capacity. The final stage of the project, Dyason’s Klip 2, should reach commercial operation within the coming months.

Key to the system’s success are Hydrelio float mechanisms, which are made from recyclable, high-density polyethylene. These are highly resistant to UV exposure and corrosion, do not contaminate the water on which they sit and have a lifespan of more than 20 years.

In Zambia, adding power capacity has been deemed a matter of national urgency, as years of low rainfall have put a serious strain on the country’s hydropower facilities. A World Bank Group programme called Scaling Solar has brought immense relief to the country. In mid-2015, Zambia’s Industrial Development Corporation signed an agreement with the International Finance Corporation to explore the development of two large-scale solar projects. The competitive auction organised through the programme attracted 48 solar-power developers, seven of which submitted final proposals. Both plants began operations in March 2019.

Zambia has added a combined capacity of 75.7 MW (enough to power 27 000 homes) through Scaling Solar projects. The country hopes to develop at least 500 MW of solar power in the coming few years, so this is indeed a very good start.

Botswana and Namibia are following closely, as the two countries’ governments are looking to develop a solar megaproject that could add as much as 5 000 MW of new solar power in the coming 20 years. There is little doubt that the projects will prove successful, as both nations enjoy abundant sunlight – around 10 hours per day for 300 days each year – as well as some of the highest solar-irradiance potential of any country in Africa, which is highly promising in terms of productive PV and CSP installations.

In Mozambique, a contract has been awarded to develop a 41 MW solar power plant – the highest installed capacity in the country to date – in the north-eastern Cabo Delgado province. The plant is expected to begin operations at the end of 2020.

Asked what he thinks South Africa most needs to ensure that its renewable energy sector achieves its full potential, Jan Fourie, Scatec Solar’s GM of South Africa and VP of project development in sub-Saharan Africa, says the government has enabled a steady increase in renewable-energy supply to the grid, with the IRP2019 showing real policy commitment to a transition within the energy sector.

‘South Africa must remain committed to clean and affordable energy and allow the renewable industry to develop in a transparent and free market alongside the urgent and long-term needs of South Africa’s energy sector,’ he says.

For SAPVIA’s Govender, the biggest opportunity for the solar industry lies in distributed generation and the potential thereof. ‘Given the energy crises and continuous load shedding, any initiative that will allow additional capacity on the grid will ease South Africa’s woes,’ he says. ‘Renewable energy and solar PV specifically provide viable solutions in short times and at low costs. Small-scale embedded-generation solar PV provides solutions at no cost to government, with the potential of 2 000 MW on-line in 12 months.’

Analysts say the industry is anticipating much progress over the next few years – provided government plans are followed. The Department of Mineral Resources and Energy is expected to provide more clarity on its timeline for utility-scale procurement of solar as part of the REIPPPP Round 5, for example. Given that customer solar PV installations account for less than 1% of the country’s electricity, there is a lot of room for growth in distributed generation to come.