In South Africa alone, five new banks – some of them mobile-based and digital-only – are in the process of being launched. One of these is Bank Zero, which co-founder and former FNB CEO Michael Jordaan has dubbed the ‘Google of banking’ for its ease and simplicity. The app-driven bank intends to provide added control, affordability and ‘a fresh take’ on banking.

There won’t be any bricks-and-mortar branches and not even a call centre when the bank is officially launched in 2019. All communication will happen digitally via the app. This concept follows the asset-free, app-driven model of Uber (the taxi service that doesn’t own cars) and Airbnb (the hotel service that doesn’t own rooms). In line with the sharing economy, Bank Zero is the bank that doesn’t have financial stock. As a mutual bank, it doesn’t offer credit and is owned by its customers – individuals and businesses.

It is hoped that the creation of digital financial communities, such as clubs, families and businesses, will strengthen the country’s abysmal savings culture.

Another potential game-changer about to launch, TymeDigital by the Commonwealth Bank SA, has its origins in a local fintech business called Tyme (Take Your Money Everywhere). It’s already operational as a money-transfer service, based on self-service kiosks, and will soon offer full-service retail banking. Patrice Motsepe’s African Rainbow Capital owns 100% of TymeDigital, which intends to bring affordable and accessible banking to the unbanked and underserviced as well as to SMEs through a network of partners, including supermarket group Pick n Pay.

TymeDigital CEO Sandile Shabalala says: ‘We will offer South Africans the ability to open accounts and transact securely, within minutes. Through our innovative technology and financial education we aim to get more people using banking services to enhance their lives and increase economic participation.’ 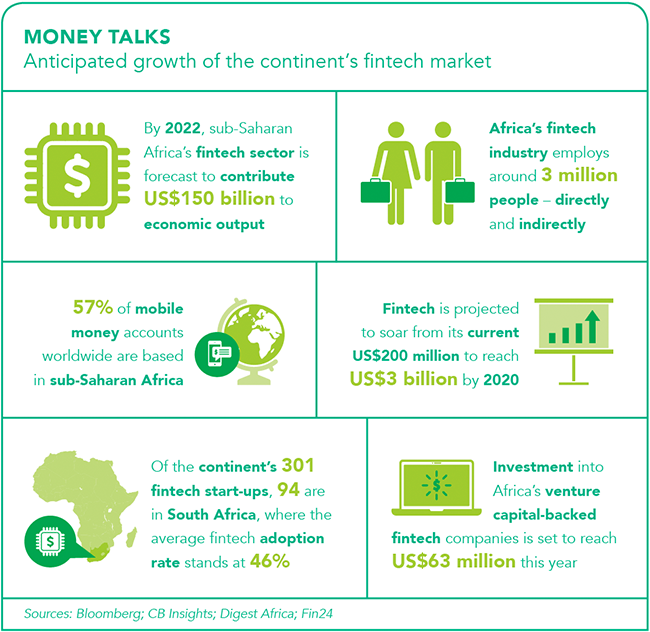 South Africa’s third newcomer, Discovery Bank, targets a more affluent consumer segment and can tap into the membership base of Discovery Health, Credit Card and Insure. However, its launch (set for third-quarter 2018) was postponed, and group CEO Adrian Gore has not yet divulged whether the bank will have a physical presence or be digital only. Media speculations have suggested that the app-driven Vitality loyalty scheme could be extended to the bank and – in a far-sighted move – will reward client behaviour that promotes ‘financial wellness’.

In addition, African Bank and Postbank will introduce retail-banking services, bringing the number of new SA banking operations to five.

The country’s four big banks (Absa, FirstRand, Nedbank and Standard Bank) have already had to make room – for Capitec Bank in 2001. They are now upping their own digital offering.

FNB, for example, allows new clients to open bank accounts by simply taking a ‘selfie’ at home. All they need to do is upload their selfie onto the bank’s app, which will verify their biometric information against Home Affairs records.

As Fabio Mione, head of integrated channels and strategic execution at Nedbank, explained at ITWeb’s recent AI conference, Pepper helps people understand how to download and activate the Nedbank app from both Android and iOS stores. ‘She also provides information on our cash-accepting ATMs and this has probably been Nedbank’s greatest value from Pepper so far,’ said Mione.

According to ITWeb, the banking robot will soon be able to use AI to search an internet-based database and provide clients with information, such as interest rates in real-time. This type of consumer-centric approach and personalised service is set to enhance the customer experience – which, according to Frost & Sullivan, is one of the trends driving growth within the financial services market. ‘The use of advanced technologies – which include cloud, platforms, internet of things, artificial intelligence, machine learning, blockchain and application programming interfaces – impact operations of companies and customer experience,’ the advisory firm states in its latest analysis of global fintech. ‘The application of technologies enhances the outcome of services and sub-segments like fintech platforms, robo-advisory, insurtech, regtech [regulatory technology] and paytech, which are expected to grow rapidly.’

This futuristic scenario intimidates many industry players: 83% of financial institutions in Europe, the Middle East and Africa fear their business is at risk of being lost to standalone fintech companies, according to a 2017 survey by Aon Risk Solutions.

A total of 39% say they are unprepared to adapt to innovation and, consequently, nearly a quarter report to having suffered a monetary loss over the last 12 months. One way of solving this perceived threat is by investing, acquiring or collaborating with fintech start-ups. According to Disrupt Africa’s Finnovating for Africa report 2017, the continent is home to more than 300 fintech start-ups, most of them in South Africa (94), followed by Nigeria (74) and Kenya (56). Ghana and Côte d’Ivoire also have growing fintech ecosystems.

Sub-Saharan Africa’s fintech sector already employs about 3 million people – directly and indirectly, according to a Bloomberg report. Its economic contribution to the region is expected to increase by at least US$40 billion to US$150 billion by 2022, with mobile phone firms currently generating the majority of the revenue. This shouldn’t come as a surprise, considering Africa’s high penetration of mobile phones coupled with the fact that sending money via mobile channels is relatively affordable. ‘At a cost of 11.2% of the transaction value, banks continue to be the most expensive channel to send remittances. Processing remittances through mobile money wallets is by far the cheapest option available to consumers at just over a quarter of the cost charged by the banks,’ says Frost & Sullivan in a market forecast.

In sub-Saharan Africa, the share of adults with a mobile money account has nearly doubled to 21% since 2014, according to the World Bank’s 2017 Global Findex Database. This is the highest percentage in the world.

The trailblazer in mobile money, Safaricom’s M-Pesa, was the most successful mobile-based financial service in the developing world in 2010. Since its launch in Kenya in 2007, the payment platform has recorded transactions worth more than half the country’s GDP.

Many others have followed, among them Nigeria’s Paga, a mobile payments company named the Most Innovative Fintech in Africa at the 2018 Africa Fintech Summit. In September, Paga raised US$10 million in a funding round led by London-based Global Innovation Fund.

Yet another big-ticket investment deal (which raised US$8 million) involves Nigeria’s Paystack, a start-up that allows African businesses to accept payments via credit card, debit card, money transfer and mobile money on their websites or mobile apps.

Pan-African digital payments firm Cellulant, which has more than 100 million customers in 11 countries, raised US$47.5 million. According to Forbes, a significant portion of the funds will go into Agrikore – the firm’s blockchain-based, smart-contracting, payments and marketplace system that ensures people involved in agriculture can do business with each other in a trusted environment. This includes farmers, FMCGs, agriculture inputs providers, produce aggregators, insurance companies, financial institutions, governments and development partners.

These start-up examples show how technology can contribute to financial inclusion, improve processes and spur economic growth. Digital platforms such as Bank Zero and TymeDigital democratise banking by levelling the playing field for previously underbanked consumers and SMEs, while blockchain-based offerings such as Wala add a further layer of efficiency, security and transparency.

When implemented correctly, fintech has the power to improve financial services and enhance the customer experience for everybody in Africa.

More than 3 000 women leaders of farming co-operatives in Rwanda are... END_OF_DOCUMENT_TOKEN_TO_BE_REPLACED

A 13 km high-voltage power line being built in Zimbabwe is the... END_OF_DOCUMENT_TOKEN_TO_BE_REPLACED

Small and medium-sized businesses in Ghana that are struggling to adapt to... END_OF_DOCUMENT_TOKEN_TO_BE_REPLACED