The cryptocurrency hype has quickly fizzled in the past year since its meteoric rise and subsequent tangling in a fence of regulatory and security issues, with a good measure of market frenzy added in. The plummet in value of cryptocurrencies that resulted across the board is not necessarily an indication of their potential as a transactional medium or holder of value, but perhaps more of the current zeitgeist. Experts say maybe we’re just not ready for a new form of money.

The same holds true for cryptocurrency adoption across African markets, but it’s infinitely more complicated in a market where the majority of people don’t have access to the bank account required to even buy cryptocurrencies, or the technology to use them on a daily basis. While the introduction of cryptocurrencies to many African markets has its obvious challenges – the above-mentioned technological literacy and financial infrastructure, for instance – the potential is there as it is in other markets.

At the height of the crypto boom, Ethereum creator Vitalik Buterin asked in a tweet: ‘How many unbanked people have we banked?’, which cuts to the centre of the entire debate. The potential uses for bitcoin, Ethereum and other cryptocurrencies are legion but only for a select percentage of people in Africa – for now, at least. On the other hand, for businesses in Africa, cryptocurrencies have shown promise and continue to do so as they evolve. ‘Success breeds success,’ according to Investec blockchain lead Chris Becker. ‘For cryptocurrencies to gain more acceptance, people need to see value in utilising and participating in the underlying economies of the blockchain technologies.’ The current volatility in bitcoin is due to this very reason. The technology is still in its infancy, seeing that around 0.2% of the world’s population uses blockchain technology, which is on par with the world’s most illiquid currencies. ‘One would expect these fiat currencies to be volatile, so it should come as no surprise that cryptocurrencies have been on such a roller coaster ride,’ says Becker.

These currencies can play an integral transactional role in countries, such as Zimbabwe, that are experiencing severe inflation and where fiat money is worth less than the paper it’s printed on. This is indeed the sales pitch from cryptocurrency service providers like US-based Paxful. ‘Buy bitcoins instantly in Nigeria. Protect your money from the falling naira and secure your currency in bitcoin. Buy bitcoin with any payment option including Amazon gift card, iTunes gift card and bank transfer’, is the call to action on its website. The volatility of bitcoin, however, doesn’t compare favourably to that of other volatile currencies, such as the naira.

When they eventually become more widely accepted, cryptocurrencies can offer entrepreneurs in Africa a new digital asset through which they can engage in arbitrage trading of currency, assets, gift vouchers or other goods and services, Becker explains. ‘It’s acting like a currency that creates interoperability with other international financial systems, without needing to go through the US dollar, which is often inaccessible to the average person,’ says Becker. ‘Think of it as Uber connecting African financial markets to the rest of the world.’

M-Pesa needs no introduction. Launched by Vodafone for Safaricom and Vodacom in 2007, today the money transfer, financing and microfinancing system is one of the most successful mobile services in the world. Using the M-Pesa network, users can deposit, withdraw, transfer money, and pay for goods and services with a basic mobile device through a PIN-secured SMS. In economies where the majority of people don’t have access to a bank account, it’s become the obvious choice for millions of Africans. So, what do cryptocurrencies offer the African masses that M-Pesa can’t?

‘Blockchains started off as a system for basic value transfers, which is almost an equivalent to M-Pesa,’ says Becker. However, cryptocurrencies then rapidly evolved with decentralised exchanges to enable peer-to-peer trading, money market platforms to enable peer-to-peer loans, derivatives and predictions markets to assist in risk management as well as digital identity and credit scoring platforms, he explains. These systems all run on the Ethereum blockchain, one of the other better-known cryptocurrencies, and are fully accessible to people with internet access. ‘It’s a utility that M-Pesa is unlikely to ever offer,’ he says. 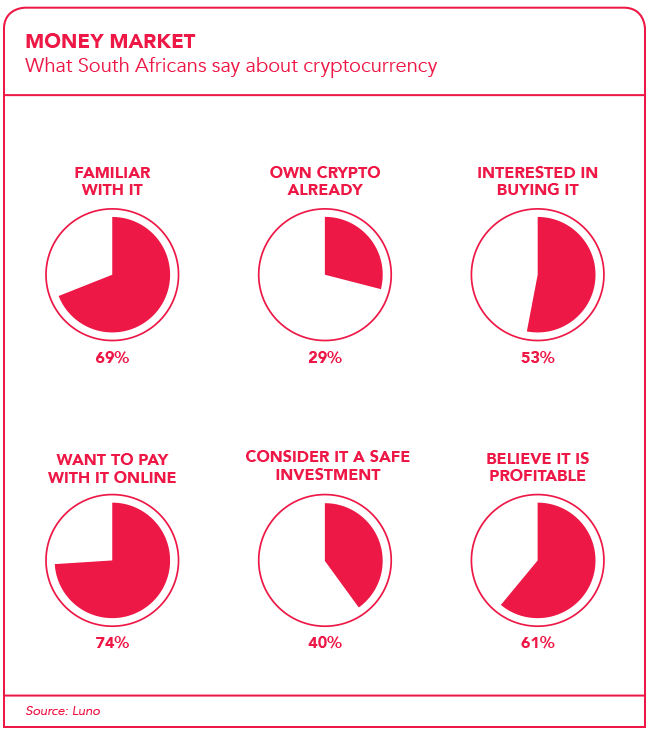 Moreover, M-Pesa is still linked to the local currency and merely makes its transfer more efficient, but it doesn’t stop any form of hyper-inflation, says Alex de Bruyn, CEO at Johannesburg-based DoshEx, a developer of tokenised ecosystems and an exchange platform. African countries are not unfamiliar with how hyper-inflation or local currencies can leave their citizens in ruins, he says. ‘Crypto gives the individuals the freedom to hedge their wealth abasing the local currencies that are controlled by governments that might not have the best interest of the man in the street.’

Many African nations, excluding South Africa, operate in multiple currency pairs, so calculating exchange rates on the fly and switching between currencies is a pretty common occurrence in trade. ‘Cryptocurrencies enable users to add a currency pair to the mix, which enables locals to globalise either their own finances or businesses instantaneously,’ says De Bruyn. ‘Crypto makes your geographical presence less important when trying to partake in a global market, and it allows anyone to instantly globalise their trade and give them access to a much greater market reach than they would have been able to.’

For business owners who want to send money abroad, this is exciting stuff – but less so for the man on the street. The conversation of crypto as a revolutionary medium should then be seen in this way, as working in parallel with other mediums of transaction to cater to the needs of everyone.

Christopher Renwick, senior tax attorney at Tax Consulting South Africa, believes that it’s unlikely that cryptocurrencies will succeed as a transactional medium in Africa because of ‘a lack of information technology’ and because African economies are largely cash-based. ‘While it may be legitimate, it’s not likely to be useful,’ he adds.

BitPesa is a digital foreign exchange and payment platform that leverages blockchain settlement to significantly lower the cost and increase the speed of business payments to and from frontier markets. The exchange standardises global payments so companies can make payments with a single transaction. For example, you can send fiat currency globally to a recipient in an African country through BitPesa, without ever having to buy bitcoin yourself.

In theory, using cryptocurrency for remittance payments and cross-border money movement is easy, says Richard de Sousa, senior partner at AltCoinTrader, a cryptocurrency exchange based in South Africa. ‘You can send bitcoin or any other crypto within a matter of seconds, not only across borders but across the world. However, there are many factors that would influence this and many factors that stand in the way of taking this to mass adoption,’ he says.

We can expect the technology and the facilities to continue to evolve and open up ways for people to transact using crypto, either directly or by converting it to fiat currency, says De Sousa, but he still thinks it’s a long way off for many countries in Africa.

Eamon McLoughlin, co-founder and business development director of Beya Technologies, a blockchain mobile software provider, says: ‘Like the early days of the internet, cryptocurrency technology is still in its infancy. But when more start-ups and companies start using crypto and government regulations are modified, there is a high chance for crypto to become mainstream.’

Becker believes that over time cryptocurrencies will disrupt any centralised, closed-loop financial system, in the same way that the internet disrupted older closed-loop communication and content distribution systems. For companies such as BitPesa, this outcome is in the making but, as a writer for TechCrunch puts it, ‘it’s still a niche service, and it is not clear whether similar products will ultimately offer the mass market a better option than the status quo’. And that was written three years ago.

‘How many unbanked people have we banked?’ Buterin asked in 2017. He followed that tweet with another question. ‘How much censorship-resistant commerce for the common people have we enabled?’ And another. ‘How many dapps [decentralised apps] have we created that have substantial usage?’ Also, ‘How many Venezuelans have actually been protected by us from hyper-inflation.’ Buterin concluded his Twitter salvo by answering: ‘Not enough.’

More than 3 000 women leaders of farming co-operatives in Rwanda are... END_OF_DOCUMENT_TOKEN_TO_BE_REPLACED

A 13 km high-voltage power line being built in Zimbabwe is the... END_OF_DOCUMENT_TOKEN_TO_BE_REPLACED

Small and medium-sized businesses in Ghana that are struggling to adapt to... END_OF_DOCUMENT_TOKEN_TO_BE_REPLACED