During the national upheaval of Zimbabwe’s recent change in leadership, there was a clear yet surprising, winner – and it wasn’t the new president Emmerson Mnangagwa. It was Bitcoin. The global cryptocurrency climbed to a record high of US$13 900 on Harare’s Bitcoin exchange, Golix, almost double the rate at which it was trading on international markets. In Zimbabwe, that marked a fortyfold increase in Bitcoin’s value since the start of 2017 – far outstripping its manifold increase in value internationally.

Demand for Bitcoin in Zimbabwe sky-rocketed during the November ‘coup’, with Golix processing more than US$1 million in transactions during the month compared to just US$100 000 in the whole of 2016. For many Zimbabweans, whose own currency was abandoned in 2009 amid rampant hyper-inflation, investing in virtual currency makes sense: while the country has switched to US dollars and South African rands, those dollars (or ‘zollars’, as they’ve come to be known) aren’t necessarily worth their actual value, with parallel markets and difficult exchanges forcing locals to pay up to US$180 for US$100 in cash. Quite suddenly, a virtual, anonymous, decentralised, unregulated online currency feels like the most secure option.

This is not unique to Zimbabwe. Venezuela and Argentina have also seen citizens – driven by distrust of governments and banks – using Bitcoin as an inflation hedge.

‘To a certain extent Bitcoin is the modern version of gold,’ Amherst Pierpont Securities global strategist Robert Sinche told Bloomberg News in mid-November. ‘It’s another indication that rather than being a currency or a store of value, Bitcoin is something that people run to in times of stress, when they don’t want to be discovered or their identity found out… A way for people to move capital without being discovered.’

While many cryptocurrency investors in the West are attracted by its built-in anonymity, investors in Africa are increasingly drawn to it as a means of exchange and a store of value. After all, in many countries on the continent there are more mobile phones than bank accounts – making digital money easier to handle than cash in the bank. And Bitcoin is just one example. There are currently more than 900 different digital currencies available. One of them, Ethereum, ballooned in value by 5 000% at one point in 2017. 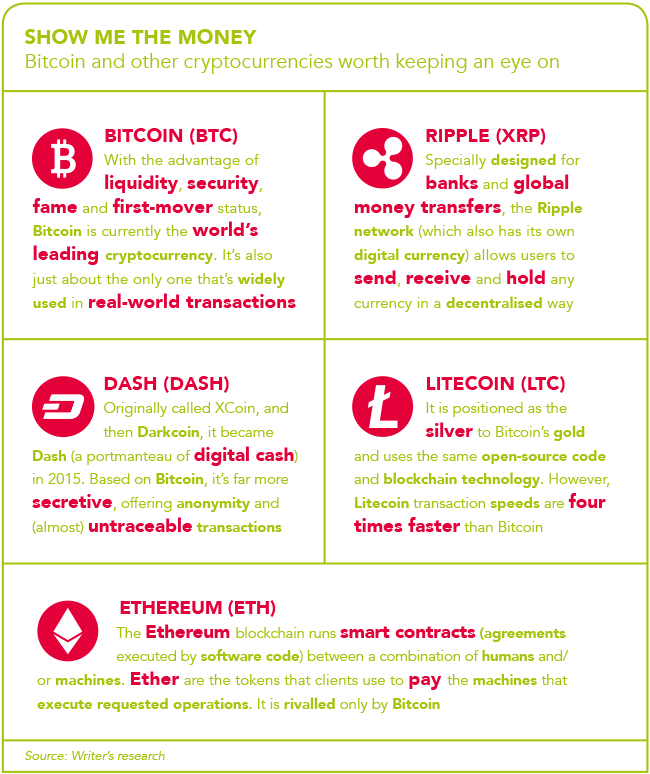 Bitcoin first appeared in early 2009, introduced by a mysterious (perhaps imaginary, even) figure named Satoshi Nakamoto. The underlying software determined that new Bitcoins would be released (or ‘mined’) slowly and steadily until (around the year 2140) there are 21 million in total. After that, no more will be created. The intention here is to create a built-in sense of scarcity, and to prevent the kind of hyperinflation that happens to hard currency when central banks print too much money.

This is exactly why Gavin Andresen (who is chief scientist at the Bitcoin Foundation and, to many, the ‘face’ of the cryptocurrency) carries a 100 trillion Zimbabwean dollar note in his wallet: as a reminder of how currencies can go horribly wrong.

To that point, one of the attractions of cryptocurrencies such as Bitcoin is that they have no third-party centralised authorities. Instead, they offer peer-to-peer payment, protected by a shared (and continually reconciled) database known as a blockchain. The ledger is completely decentralised, hosted on thousands of computers simultaneously and accessible to anyone on the internet.

‘This is a distributed ledger,’ Wall Street Journal columnist Michael Casey explains in a 2016 documentary film titled Banking On Bitcoin. ‘There is no central server. All the other ledgers that we have – all banking ledgers, all company ledgers – all sit and reside inside that company, which means they have one point of attack. They can be hacked. The Bitcoin ledger resides on thousands of computers. You can’t hack that.’

Given the massive populist criticism of centralised banks, especially in the wake of the 2008 global financial crisis, it’s easy to see the attraction of decentralised cryptocurrencies. What’s not so easy, however, is seeing how cryptocurrencies should fit in with existing monetary systems. Regulating a currency such as Bitcoin or Ethereum is a nightmare for governments, which often don’t know where to start.

‘There are multiple aspects [to the regulation of cryptocurrencies],’ Andrei Kirilenko, director of the Centre of Global Finance and Technology at the Imperial College of London, warned recently during a panel discussion arranged by the African Institute of Financial Markets and Risk Management at the University of Cape Town.

‘Suppose I’m a regulator. What do I regulate? There are different pieces of regulation.’ Those issues range from consumer protection to governance to monetary policy to fraud prevention to issues of privacy, and so on.

‘These questions have been asked by regulators around the world,’ he said. ‘The answers at this point are: we are not sure, we don’t know. We don’t know under which mandate to work, or what part of it to regulate.’

In the midst of Zimbabwe’s November ‘coup’, and as Bitcoin’s value in the country was booming, Norman Mataruka, director and registrar of banking at the Reserve Bank of Zimbabwe made a curious, cautionary announcement. ‘In terms of the Bitcoin, as far as we are concerned, it is not actually legal,’ he told the state-owned newspaper, the Herald. ‘In Southern Africa, what we have done as regulators, we have said that we will not allow this in our markets. Research is currently being undertaken to ascertain the challenges and risks associated with these particular products and until we have actually established and come up with a legal and regulatory framework for them, it will not be allowed.’

In September, the Bank of Namibia published a nine-page paper confirming that cryptocurrency exchanges are not allowed in the country, with merchants forbidden from accepting them as payment for goods and services. ‘In addition to the bank not recognising virtual currencies as legal tender in Namibia, it also does not recognise it to be a foreign currency that can be exchanged for local currency,’ the paper states. ‘This is because virtual currencies are neither issued nor guaranteed by a central bank nor backed by any commodity.’

Meanwhile, Nigeria emerged as the leading global market (ahead of the US) for Bitcoin exchange Paxful. The Huffington Post quoted Paxful as saying that it does in excess of US$10 million volume transactions a week in iTunes Gift Cards from Nigeria to China alone. And in March, global blockchain-based payment service provider Bitwala announced that users can now send Bitcoin to M-Pesa accounts in selected African countries, free of charge. ‘We want to be a part of the mobile money revolution, and we’re stepping it up a notch by enabling anyone to send money to any mobile money account in Kenya, Nigeria, Tanzania and Uganda using Bitcoins,’ Bitwala CEO Jörg von Minckwitz said in a statement.

So while some African countries are banning cryptocurrencies, others are embracing them. And while in some parts of Africa investors are enjoying the boom, in other parts these virtual currencies are being used simply as a safeguard against faltering governments and failing banks.

From Harare to Windhoek to Lagos to Nairobi, there’s a growing sense that – no matter what the local reserve bank has to say about it – cryptocurrencies are here, and they’re here to stay. In late November, CME Group, the world’s largest derivatives exchange, confirmed that it would create a futures contract for trading Bitcoin, bringing the currency one step closer to becoming a legitimate mainstream financial asset like oil or gold.

When the news broke, the price of Bitcoin hit US$6 500 – signifying a record high, albeit one that would pale in comparison a mere month later, when the price soared past the US$19 700 mark.

Digital data technology, as well as barcode scanning, will be employed in... END_OF_DOCUMENT_TOKEN_TO_BE_REPLACED

Farmers in East Africa have a free, new mobile tool at their... END_OF_DOCUMENT_TOKEN_TO_BE_REPLACED