If there was any silver lining to be found in the great global cloud of COVID-19, you probably wouldn’t expect to find it in the retail sector. Yet, despite shops being closed and shopping malls shuttered during South Africa’s national lockdown, Peach Payments reported seeing about a 400% increase in the number of merchants signing up to use its online payment gateway through March and April 2020.

‘We’re seeing an incredible movement towards e-commerce as a secondary – if not primary – source of business for organisations across the country,’ he says. ‘That’s echoed in some of the data that we’re seeing around adaption, and the greater level of engagement that consumers are showing.’

Here Stewart points to some of the report’s key figures. ‘In the general online shopping category, 57% of the survey participants said they had already shopped online prior to COVID-19,’ he says. ‘Some 26% said they are going to do a great deal more in the future, while 11% are brand new to shopping online. Eleven percent! And I take us back to the demographics of our sample. We’re not talking about the elite here. We’re not talking about people with significant house-hold incomes. We’re talking about your average South African.’

This supports the anecdotal evidence of housebound South Africans who either could not or did not want to go to brick-and-mortar stores for their shopping during the lockdown. Rogerwilco’s report found that while just 31% of interviewees had bought groceries online before the pandemic, 15% did so for the first time under lockdown, and 22% said they would make greater use of digital channels to purchase their groceries in the future.

While e-commerce is certainly nothing new to Africa, and while every business worth its salt would have been looking to digital sales anyway, there’s a clear sense that COVID-19 has rapidly accelerated that trend.

‘Anybody who was already in e-commerce or selling online is in a good space,’ according to Warrick Kernes, CEO of the Insaka e-Commerce Academy. ‘Any business that hadn’t made that change and was still on the fence about whether e-commerce was right for them, is probably wishing that they had done it a long time ago. I do feel bad for those companies. They should have adopted this technology along time ago.’

Kernes’ work at Insaka puts him at the coalface of Africa’s growing digital sales industry, and he’d be the first to point out that e-commerce trends vary massively from country to country. ‘People often assume that South Africa is the biggest e-commerce player on the continent,’ he says. ‘It’s not. Nigeria is far ahead. They’ve been forced to adopt e-commerce because the country is so big and the people living outside of the major cities are so remote. Most of the population live in rural areas, so the idea of having something delivered is far more appealing to them than getting in a bus and driving into town to pick something up.’ 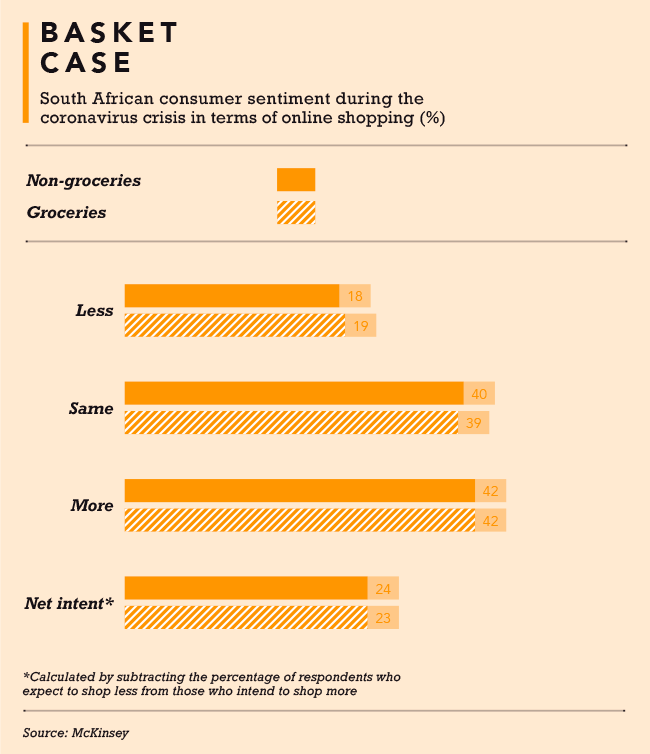 Kernes believes that while COVID-19 has driven much of the recent adoption of e-commerce in Africa, the real leap has yet to come. ‘When the African Continental Free Trade Area comes into effect we’re going to see it accelerate again,’ he says. ‘It’s not too difficult for South Africans to sell into Namibia right now, for example, but selling into the Congo is still tricky because of the customs duties and delivery costs.’ Once those trade barriers are removed, he says, cross-border sales could explode.

As for the delivery costs, he isn’t too concerned. ‘You’d think it would be quite expensive to deliver goods to remote rural parts of the continent, but that’s not necessarily the case,’ he says. ‘DHL is moving into this space. They have big cargo logistics going into those areas already, and they always have empty space in their big vans and containers. Now they’re jamming a whole bunch of e-commerce orders into those vans to make sure they’re full.’

Kernes plots the hypothetical journey of a fully kitted, high-end bicycle from a warehouse in South Africa to a remote farm in the Great Lakes region. ‘Let’s say you’re sending that bicycle into Tanzania, and it has to cross Lake Manyara,’ he says. ‘DHL will take it to their depot closest to the destination, and there they’ll have local entrepreneurs waiting with bicycles and boats. Those locals will bid for the rights to transport that boxed delivery across the lake to wherever it ultimately has to go, and whoever bids the lowest wins. And that’ – Kernes stops and smiles – ‘is how you get a ZAR150 000 Cannondale bicycle cruising across Lake Manyara on a little boat.’

E-commerce platform Brownsense is also looking into the possibilities around cross-border digital sales. ‘That’s how we’ve conceptualised Brownsense. Africa, with an eye on opening up pan-African trade,’ says head of marketing Keitumetse Diseko.

Brownsense was established in 2016 with the goal of galvanising black entrepreneurs and creating a community that would – as Diseko puts it – ‘buy black’ in order to circulate the money and empower the community from within. ‘Our data was telling us that our community was already trading through borders,’ she says. ‘It just wasn’t being done in such a way that you could create a really good ecosystem around intra-regional trading.

‘The African Continental Free Trade Area is exactly what we’re preparing for. We’re helping entrepreneurs create those cross-border relationships – not just to sell their products but perhaps even to go across the border to see what raw materials they can buy.’

Like many e-sales platforms, Brownsense saw a spike in interest during the COVID-19 lockdown, says Diseko. But with new consumers came an added emphasis on creating a safe environment for online transactions. ‘There’s a huge trust factor with marketplace buying. Where there’s a community, there’s a positive trust platform, but obviously as the community grows, it can create a trust deficit. That’s why people have been begging us for a secure e-commerce platform.’

Trust is a fundamental element of online sales. Rogerwilco found that almost two-thirds (63%) of respondents gather information online but still prefer to transact within the perceived safety of a physical brick-and-mortar environment, where the risk of getting scammed is (or seems) far lower than it does online.

Trust forms the basis of the online shopping experience – whether you’re buying groceries or an e-learning course, a bicycle or a software app. And experience, Rogerwilco found, is everything when it comes to e-commerce.

Of the people surveyed who had abandoned an online purchase, 60% said that they’d switched to a rival retailer’s website because it made it easier for them to buy the product they wanted – even if it was more expensive than their first-choice e-tailer. Added to that, 75% of those surveyed said that if they had a good experience with an online retailer, they would share it with family and friends. ‘That, to my mind, is the single-most important fact that comes out of this study,’ says Stewart.

‘It’s huge. It demonstrates that if e-tailers do deliver a great experience, people are not just going talk about it, but they’re also probably going to become loyal customers. If you dig into it, and you look at where marketers invest most of their money, at the moment everybody is dead set on this land grab, the customer-acquisition focus. E-commerce marketers are throwing money at trying to acquire new business, to the detriment of fostering loyalty and rewarding those who are existing customers.’

And so it all circles back to the basics of old-fashioned sales. While businesses across Africa are seizing on the COVID-inspired spike in interest around e-sales, the ones that will ultimately succeed in this space will be those who deliver the most secure, most reliable and most pleasant buying experience.

Côte d’Ivoire has become the second country to take delivery of COVID-19... END_OF_DOCUMENT_TOKEN_TO_BE_REPLACED

Nigeria is set to commence work this quarter on a complete overhaul... END_OF_DOCUMENT_TOKEN_TO_BE_REPLACED

Burundi and Rwanda are going ahead with plans to build a multi-purpose... END_OF_DOCUMENT_TOKEN_TO_BE_REPLACED