One of the indignities of flying on a low-cost airline is the food. You’re at cruising altitude, high above the clouds between wherever in Africa you’ve come from and wherever in Africa you’re going, and all you want is a drink … and the cabin steward tells you that sales of the scandalously overpriced catering-sized cold drinks are ‘cash only, please’. So you dig through your wallet, scraping loose coins and low-denomination notes together (‘exact change only, please’), wondering who in the world actually carries cash around anymore.

Actually, most people do. According to security services firm G4S, ‘cash remains the most widely used payment instrument in the world and on all continents’, while ‘Africa appears most reliant on cash’. Hard currency – those notes and coins – remains the purchase reality for most Africans, despite the surge in mobile money usage and the growing rates of financial inclusion across the continent.

So how does that help you, sitting in Seat 12B, trying to pay for that sky-high soft drink? In South Africa, low-cost domestic airlines such as FlySafair and Kulula have launched in-flight mobile point-of-sales (mPOS) services, which allow the cabin crew to use handheld card payment devices to facilitate cashless meal payments in-flight.

Speaking to PYMNTS.com’s Tracker magazine, Eswee Vorster, head of IT and innovation at FlySafair’s parent company Safair, says that mPOS ‘gives flexibility to our customers and gives us an edge on our competitors’. He adds, though, that the technology is still relatively new, and that options are still being explored to identify and cater to frequent customers. ‘We don’t want [them] to enter PNR – passenger name records – or reference numbers,’ he says. ‘It makes the experience a bit clunky. But [with identification based on seat numbers], there is the problem that people move seats. We don’t have a bulletproof solution at the moment.’ 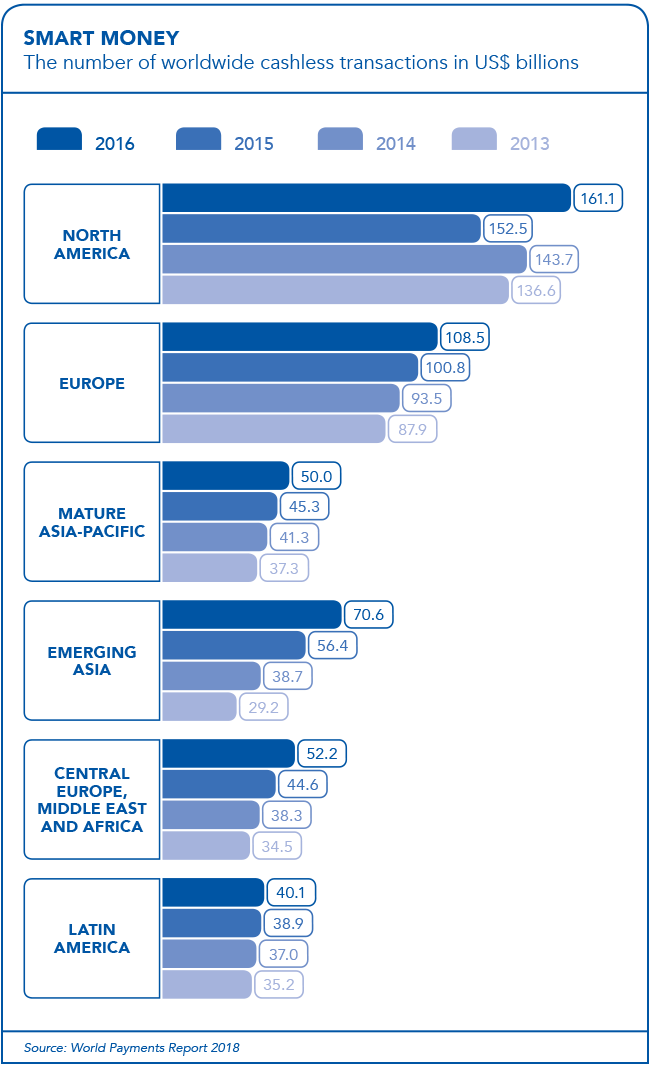 Yet that solution is coming, as the technology develops. For merchants and businesses across Africa, who still rely so heavily on cash, it can’t come quickly enough. ‘While seemingly inexpensive, cash comes at a high cost to governments, businesses and consumers, placing unnecessary strain on economies,’ Gilberto Caldart, Mastercard president: international, says in a recent statement. ‘The printing, distribution and handling costs of cash alone place as much as a 1.5% burden on national gross domestic product. The impact is even greater if you take into account the costs associated with fighting illegal activity, fraud, corruption and the shadow economy – all of which are fuelled by cash.’ He adds that for consumers, cash is ‘inconvenient, dangerous to carry and expensive’. He said: ‘In South Africa, for instance, cash costs consumers ZAR23 billion a year, and the costs are disproportionately carried by low-income earners. This remains true across several other African countries where people often have to trade off the demands of an hourly job with the need to travel long distances to access cash or stand in line to pay a bill. Many people also face the danger of being robbed when they come home with their wages.’

As a senior figure at a multinational credit card company, one would expect Caldart to hold a dim view of cash transactions. Yet his point remains valid: credit and debit cards are becoming more commonplace across Africa, and fintech companies are rolling out cheaper and more efficient mPOS devices by the day.

In South Africa, for example, Yoco’s mPOS payment service is now used by more than 28 000 small and medium-sized businesses. According to the company, at least 70% of its merchants have never accepted cards before. Its system is typical of the technology: to accept card payments, business owners connect the Yoco card-reading device to their smartphones or tablets; the hardware is then paired with an app and business-intelligence portal to provide real-time access to sales insights and analytics, helping the business owner to further boost their revenue through informed decision-making. ‘Small and medium businesses employ over 60% of the labour force in South Africa, yet they lack the basic tools necessary to accept electronic payments and run their businesses effectively,’ according to Yoco CEO Katlego Maphai.

Devices such as the Yoco – a small unit, about the size of a pocket calculator – are enabling cashless transactions in restaurants, bars, shops and market stalls across the continent and the rest of the world. A recent market forecast by UK-based Juniper Research projects that the adoption of mPOS devices will drive annual mPOS transactions to more than 87 billion by 2023, representing a three-fold increase over an estimated 28 billion transactions in 2018. Yoco, iZettle, SumUp, Square, ZipZap – even smaller operations such as KwaZulu-Natal’s iKhokha start-up – are now putting small mPOS payment devices in the hands of sales staff around the planet.

The affordability of these devices – coupled with their simplicity of operation – will drive the growth even further. Juniper forecasts that the average price of an mPOS device will drop from US$40 in 2018 to approximately US$33 by 2023, making them increasingly attractive to smaller, previously cash-driven businesses that want to own the units rather than rent them from the provider.

They’re also attractive to businesses that use debit- or credit-card machines. Unlike traditional speed points, which are tied to networks via cables, mPOS devices aren’t limited to a specific location. Instead, they connect to a smartphone via Bluetooth, and use that to connect to the network. The mPOS devices are, of course, only one option. QR code-based mobile payment apps such as Zapper and Snapscan, or digital wallets like MasterPass provide for cashless payments, while Virgin Money’s new mobile service allows users to read a QR code using a single app instead of having to choose between multiple apps.

There’s an obvious attraction to having an integrated solution. Nairobi-based Pesapal aggregates online and mobile payments in Kenya, Uganda and Tanzania, and recently introduced an mPOS service called Sabi that processes payments in local currencies as well as US dollars. Pesapal now integrates payments from Samsung Pay, Apple Pay, Fitbit Pay and Google Pay on its tap-and-go Sabi M010 terminals, allowing retailers across East Africa to accept digital-wallet payments instead of credit- or debit-card chip or PIN transactions.
‘New payment technologies are exciting for us,’ says Pesapal CEO Mark Mwongela. ‘With digital wallets, the ability for a consumer to transact quickly and securely enables the merchant to focus on providing more value for the customer, with the transactions taking the least time in the process. As a leading payment service provider, and especially in the hospitality and tourism industry, this will be key to stimulate spending among digitalwallet users.’

Consider the next time you’re tempted to buy a drink or snack when you’re catching a flight. Just a few months ago you’d have had to pay for it with cash. Now, whether you’re in the air or on the ground, a rapidly expanding network of handheld devices will let you buy almost anything you want, using your credit card or your smartphone. Before long, you’ll have forgotten what actual money looks like.

Ghana has opened its first farmer-owned cocoa fermentation centre. The facility, at... END_OF_DOCUMENT_TOKEN_TO_BE_REPLACED

An initiative supporting efforts to ensure the continuation of education amid the coronavirus... END_OF_DOCUMENT_TOKEN_TO_BE_REPLACED

The Namibian government is rolling out a NAD500 million COVID-19 loan scheme... END_OF_DOCUMENT_TOKEN_TO_BE_REPLACED