According to analysis by consultancy McKinsey, the effects of the COVID-19 pandemic could see African banking revenues falling by 23% to 33% between 2019 and 2021. Over the same period, the consultancy reports, ‘African banks’ return on equity could fall by between five and 15 percentage points, driven by rising risk costs and reduced margins’. Banking revenues, they warn, may return to pre-COVID-19 levels only in 2022 to 2024.

No, let’s reword that. African banks are in crisis. But African banking – especially its fintechs – is doing just fine, all things considered. The continent’s fintech start-ups raised almost US$350 million in the first quarter of 2020, which the Fintech Times charts as being a 37% increase compared to last year’s figure of US$256 million. The top countries were South Africa (US$112 million), Nigeria (US$74 million), Kenya (US$62 million) and Egypt (US$51 million), which together earned 85% of African investments.

To get an idea of how busy the market has been, consider this: Togo’s Ecobank Group launched a new Pan-African Banking Sandbox, and gave cash prizes of US$10 000 to Ghana’s Nokwary Technologies, US$7 000 to South Africa’s Ukeshe technology platform, and US$5 000 to Ghana’s Growth Factor in its annual Fintech Challenge; Kenya’s MarketForce and Egypt’s Thndr both secured US$150 000 in funding from Y Combinator. Ukeshe launched a third-party processing service through a partnership with Nedbank and MasterCard. Zambia’s Zazu launched Union54, a member-owned Africa-wide fintech network. South Africa’s Standard Bank acquired a 35% stake in fintech TradeSafe. Gemini Worldwide Consultant entered into a multimillion-dollar letter of intent with South Africa’s Calibri Holdings. Tanzania’s Mipango joined the NVIDIA Inception virtual programme.

Nigeria’s Naijacrypto formally unveiled its crypto debit card. And PayDunya, which operates in Côte d’Ivoire, Benin and Senegal, announced plans to move into Mali and Burkina Faso by the end of the year. What’s more, all of that happened in August.

It was a busy month, but a typical month in the African fintech sector, which has been characterised by investment and expansion over the past few years. According to Disrupt Africa’s Finnovating for Africa 2019 report, the continent’s fintechs raised a collective US$320 million in funding between January 2015 and mid-2019, while the number of businesses in the ecosystem grew from 301 in 2017 to 491 in 2019.

The US$132.8 million raised in 2018 was reportedly the sector’s best year yet, until 2019, when (according to Techpoint Africa), African fintechs raised US$460 million out of a worldwide total of US$36 billion.

‘No space has quite the potential impact of the fintech space when it comes to impact – and profits – in Africa, with start-ups operating such platforms able to significantly address the major issue of financial exclusion on the continent and thus promote development in all sorts of other areas,’ says Disrupt Africa co-founder Tom Jackson.

Overall, 210 African tech start-ups raised US$334.5 million in total, according to Disrupt Africa’s African Tech Start-ups Funding report, with fintech investment bringing in 39.7% of total funds. ‘South Africa, Nigeria and Kenya remain the main three markets, with 141, 101 and 78 active ventures respectively, accounting for 65.2% of Africa’s fintech start-ups,’ says Jackson. Yet that market share is getting smaller as more fintech start-ups appear in other countries. ‘Though the big three markets are growing, the biggest developments are occurring in other markets, with countries like Uganda, Ghana and Egypt in particular seeing their local fintech spaces explode,’ he says, adding that a similar trend is playing out in the types of platforms being deployed. ‘Start-ups in the payments and lending spaces remain the most prevalent [but] the fastest growth is occurring elsewhere, with the number of start-ups active in areas such as investtech and insurtech, for example, more than doubling in the last few years.’

Put it this way – you know it’s a busy sector when an under-the-radar start-up like Kenya’s Zagace, which specifically targets SMEs with fewer than 10 employees, can quietly raise a healthy US$16.7 million seed round between 2016 and 2020 without anybody really noticing.

According to Techpoint Africa’s West African Start-up Decade report, the most ‘millionaire West African start-ups’ (MWAS) – that is, start-ups in Benin, Côte d’Ivoire, Ghana, Nigeria, Senegal and Togo that raised at least US$1 million cumulatively between 2010 and 2019 – came from the fintech sector. Fintechs made up 35% of all MWAS, closing the most deals (24, by Techpoint Africa’s count) between 2010 and 2020. 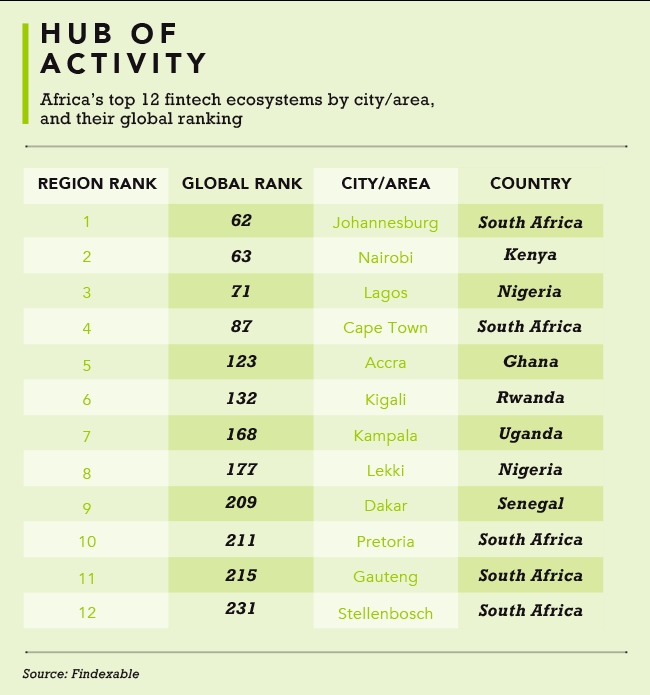 So why, if banks are wobbling, are Africa’s fintech start-ups in such rude health? It has a lot to do with the naturally nimbler and more agile smaller companies, argues Elizabeth Rossiello, CEO of African cross-border payments platform AZA.

Speaking at a Devex Coffeehouse Conversation webinar in July 2020, Rossiello pointed to the agile thinking that comes so naturally to start-ups (‘if it’s not working, how do we change it?’), as opposed to – as she put it – ‘when you talk to a large bank and they say, “It’s a three-year process to change that.” To be able to learn from your mistakes and iterate as you go forward is something a lot of these small new entrants have shown that a small company can do better than a big company’, she said.

Then, of course, there’s the uniquely African challenge of limited or non-existent infrastructure, which has left large portions of the population unbanked (350 million in sub-Saharan Africa, or 17% of the global population, according to the World Bank’s 2015 estimates). Challenge? For fintechs, it’s more of an opportunity. As AZA found, if a market doesn’t exist in Africa, you have to make that market yourself.

‘When I first started making a market between the Kenyan shilling and European hard currencies or other African currencies, I didn’t have a counterparty in those places,’ Rossiello told the Devex webinar. ‘There weren’t as many fintechs with that easy on- rail that I had in Kenya, so we actually used bitcoin. That was a way to use a fintech innovation to get going, but what we realised pretty quickly was that not a lot of people were using bitcoin. It was hard to find liquidity, and if you’re trading African currencies with low liquidity, it doesn’t make a lot of sense to add another currency with low liquidity.

‘We ended up realising – as a lot of African entrepreneurs have – that if you’re going to sell a chicken sandwich, not only do you have to find the chicken; you have to grow the wheat for the bread, buy the truck, create refrigerators, and do the whole supply chain. If we take that back to the currency markets, what we ended up realising is that we had to become a market maker on both sides. We opened up businesses in West Africa, North Africa and South Africa, opening accounts there and starting to trade on our own balance sheet as a real market maker.’

That early work is now paying off, as more and more African fintechs find themselves in big-money acquisitions. In July 2020, during the height of the global COVID-19 crisis, Nairobi-based payments provider DPO Group was bought by Dubai-based payments giant Network International for an eye-watering US$288 million. That news stood in stark contrast to the gloomy economic mood, but it’s a sign of the maturity of the continent’s fintech ecosystems. As Kola Aina, founder of Nigerian early-stage fund Ventures Platform, told Quartz Africa, ‘it’s a function of time. When you look at the trend and trajectory of our ecosystem, we’re right around when we should be seeing mergers, acquisitions, and these types of liquidity events’.

And as COVID-19 continues to disrupt the economic environment, Aina said he expects smaller start-ups to consider the pragmatic option of acquisition as well. ‘There’s a lot of value hunting happening,’ he said.

On a continent where fintechs are doing what many banks have failed to do – and are doing it very well indeed – there will be a lot of value to be found.

Egypt is building what could be the world’s largest solar hybrid facility... END_OF_DOCUMENT_TOKEN_TO_BE_REPLACED

Targeted insurance is being developed to help protect Madagascar’s farmers against the... END_OF_DOCUMENT_TOKEN_TO_BE_REPLACED

Botswana is on track to become the first country in Africa to... END_OF_DOCUMENT_TOKEN_TO_BE_REPLACED