When even the president concedes that progress towards ending patriarchy and achieving gender equality has been ‘uneven’, as South Africa’s Cyril Ramaphosa did to mark International Women’s Day in March, you know there’s a problem. And the COVID-19 pandemic has brought home its most painful costs, encouraging predatory relationships as women’s economic vulnerability traps them in abusive situations at home and work.

Even before the coronavirus hit, the Crimes Against Women in South Africa report by Statistics South Africa showed femicide to be five times the global average. And in the first week of lockdown alone, the government Gender-Based Violence Command Centre received 2 300 calls. In June, Ramaphosa labelled GBV the country’s ‘second pandemic’. But there is hope: he recognises the core of the problem and has committed to addressing it. ‘In South Africa, women bear the brunt of poverty and unemployment. They are less likely to own a business, less likely to be employed, less likely to be promoted…’

They are also less likely to be paid equally, whatever their level of employment. PwC’s Executive Directors: Practices and Remuneration Trends 2020 report, released in August, shows ‘significant pay disparities’ between male and female executives, from 25% in the small-cap sector to 39% in medium-cap and 45% across established big companies. Women comprise just 14% of executive directors in companies listed on the JSE and, when it comes to CEOs alone, just 6%.

PwC director and co-lead of the report, Leila Ebrahimi, warns that company leader-ship is now confronting one of the harshest recessions in history, and new leadership skills are needed to steer companies through the pandemic and socio-economic uncertainty.

‘Matters such as environmental concerns and pay inequality have been pushed to the forefront, while talks of the “great reset” have entered public discourse,’ she says. Ultimately, the pandemic also presents an unparalleled opportunity to be a catalyst for change, in boardrooms and kitchens, factories and farms, provided measures are taken to ensure women have access to skills and training, promotion and equal pay.

The incentive is surely there – as Ramaphosa has put it. ‘It is only when women have their own means, when they can earn their own income, when they have assets to call their own, when they have skills and capabilities, that they are able to fully control their destinies. And when we empower women in our society, what we are in effect doing is to raise incomes and standards of living, alleviate poverty and build more stable communities. By unleashing the economic potential of women, we are unleashing the potential of our economies to grow and benefit all.’

Government policies are key to women’s empowerment, and Ramaphosa has made fresh moves in this direction, with the proposal in September of three bills to tackle GBV by filling gaps in the policing and the justice systems. But empowerment takes more than that. Attitudes must change – of women, as well as men. Research by Darren Thomas Baker at the School of Business at University College Dublin suggests women worldwide still largely sideline mistreatment and blame themselves – much as in abusive personal relationships.

Last year, he noted that women believed that whatever barriers they faced (lack of recognition, discrimination, harassment), ‘if they worked hard and persevered, they could overcome challenges to career-progression and achieve success’. It is necessary, he said, for women to recognise self-blame, ditch guilt and, most importantly, share their experiences. It’s by working with others, Baker adds, that women can give ‘greater voice and pressure, and increase the chance of change’.

A study in the Harvard Business Review last year concluded that all genders benefit from a close circle of successful and supportive people, but that women are more likely to achieve the greatest possible success in their careers if their circle is made up of supportive, successful women. For men, the gender of their circle made no discernible difference. The researchers suggested the reason is that women encounter ‘certain systemic challenges’ at work – unconscious bias through to unequal pay. But when they surround themselves with other women, who fully grasp the challenges they face and can give advice from experience, and support, this can drive them to the next level of success. The study found unequivocally that women with supportive inner female circles are more likely to get jobs with greater responsibility, authority and pay. And many in South Africa confirm it – and the power of women’s support through a range of networks.

‘It is reported that more than 50% of the workforce and entrepreneurs are women, and their empowerment through support and training has never been more important than today, dealing with the economic and social consequences of the pandemic,’ says Charlotte du Plessis, founder and CEO of the Woman of Stature (WOS) training, development and networking organisation. ‘When you empower a woman, you empower a nation.’

WOS runs programmes for women to develop and improve their entrepreneurial skills, form strategic collaborations and address core challenges. ‘[The] first core challenge is the “suddenly destitute” situation women find themselves in when they lose their job, or want to exit an abusive business or personal relationship. The current social and economic situation encourages these relationships. Second is the inequality still experienced by women-owned small business that prevents them affording the talent they require to grow.’

The WOS Healing Wing programme supports the ‘suddenly destitute’ woman by finding her immediate placement in a women-owned small business, and offering financial, life and business coaching. And the Accelerate-Her programme assists women-owned small businesses struggling to grow because of lack of resources by placing Healing Wing beneficiaries with them to assist in providing the necessary talent, along with business and financial coaching. 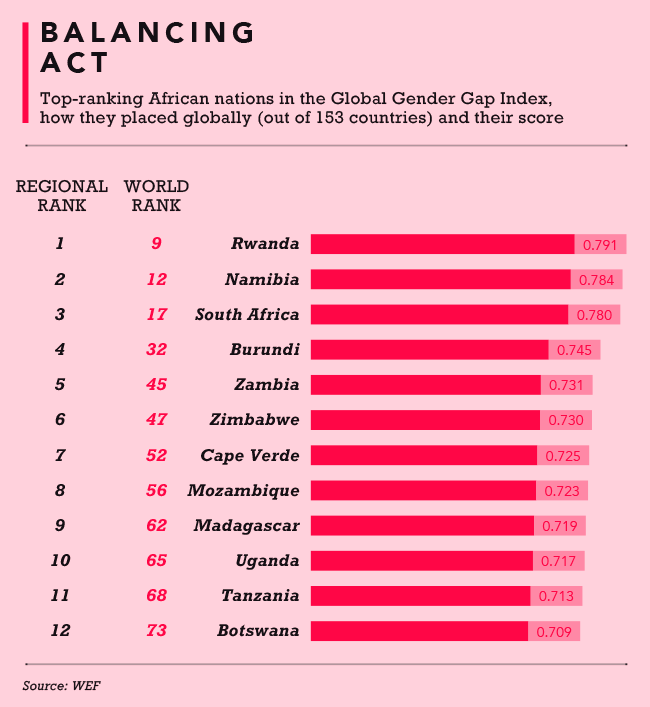 Since 2018, WOS has also partnered with Nedbank in an initiative where 50 women are chosen for their ‘intrinsic qualities and drive as change agents, with business savvy and ability to affect lives in the broader community’, says Du Plessis. Sponsored by the bank, they are taken on a Five Pillars of Empowerment Learning Journey – workshops on self-discovery, health and wellness, finance, leadership and entrepreneurship.

Cosmetic chemist Connie Oberrauter has progressed from working in a cosmetics factory to running her own consulting firm developing natural and organic cosmetics, and has now launched the Cosmetics Chef – an online operation providing specialised ingredients and ready-packed kits for women to make and package their own cosmetic products. ’An organisation like WOS is about making impactful connections with women who are willing to share and collaborate in everyone’s best interests,’ according to Oberrauter. ‘I’ve met incredible and inspirational women I’ve learnt so much from. It opened doors to me with red-carpet treatment.’

Other support systems go to root level to empower women in what remains the poorest sector: agriculture. ‘The face of agriculture in South Africa is still mainly male, even if women make up the bulk of farm labourers,’ says Rirhandzu Marivate, the Sustainability Institute’s project manager for its latest initiative, the Living Soils Community Learning Farm at Spier, near Stellenbosch. The institute’s Trust and Learning programmes are all led by women ‘passionate to bring about transitions to better futures’, she says.

In a pilot project funded by Woolworths and supported by Spier, three aspirant young female farmers who are part of the institute’s AgroEcology Academy have been selected on internship to follow their theoretical studies in best farming practices (soil health, resilient water-management, sustainable pest management systems), by putting their knowledge to work at the Living Soils Community Learning Farm on 3 ha at Spier. They will emerge next year with NQF4 accreditation and skills they can take back to their communities, empowering other women.

The interns meet each Friday with the institute’s permaculture expert, Yoliswa Mahobe, to discuss challenges and map their next moves, and are supported on the farm by farmer Eric Swarts, Spier’s farm manager Orlando Filander and Woolworths’ Farming for the Future expert Kobus Pienaar, when required.

During the COVID-19 lockdown, the Learning Farm channelled their produce to 400 at-risk families in nearby communities, and since June the most vulnerable families are still supported with weekly food parcels.

‘I love growing food and I love feeding people, especially as I now know more about nutrition,’ says intern Phuthuma Mgu, 36, who already runs a small home business, growing and selling spinach, to support her 11-year-old daughter. She documents her training through photographs and sends them back to her family in the Eastern Cape village of Engcobo.

‘Her farming knowledge will be put to good use reviving her grandmother’s land in the village to provide livelihoods for her family,’ says Marivate. ‘This is part of Phuthuma’s long-term strategy – and ours. It’s driving empowerment.’

Egypt is building what could be the world’s largest solar hybrid facility... END_OF_DOCUMENT_TOKEN_TO_BE_REPLACED

Targeted insurance is being developed to help protect Madagascar’s farmers against the... END_OF_DOCUMENT_TOKEN_TO_BE_REPLACED

Botswana is on track to become the first country in Africa to... END_OF_DOCUMENT_TOKEN_TO_BE_REPLACED