According to analyst firm Ovum, at the end of the next four years, Africa will have 1.32 billion mobile subscriptions – a penetration rate of 99%. Part of this growth story is the demand for mobile internet connectivity, with the number of mobile broadband subscriptions accelerating, as well as mobile data usage.

According to Ovum’s research, Africa had 222.3 million mobile broadband subscribers at the end of Q4 2015, representing 23% of the region’s total mobile connections. By the end of 2020, the analysts say, this number will have grown to 1 billion, accounting for 76% of the continent’s mobile connections – highlighting the shift that the industry is experiencing as consumers move towards data services, and rely less on voice.

While the consumer trend is evident, and demand for data services is surging, the price of mobile internet in Africa is frequently criticised, and mobile operators are under pressure to change their pricing models to better serve the market.

‘African mobile data prices are the least affordable in the world. For just 500 MB each month, the average African must cough up around 15% of their monthly income – more than three times what someone in Asia would pay, and more than 15 times what a European would,’ says Alliance for Affordable Internet’s Africa regional co-ordinator Onica Makwakwa.

South Africa’s Vodacom – one of the continent’s largest mobile broadband providers – confirms data traffic on its network has sky-rocketed over the past year, increasing 46.8% over the year to March 2016. This growth can be attributed to a combination of aggressive network upgrades, lower device costs and the provision of innovative data bundle offers, the operator says.

‘In South Africa … we spent ZAR8.7 billion to upgrade our network infrastructure, which includes more than doubling our LTE/4G sites to over 6 000. This enabled us to increase LTE/4G coverage across South Africa … to satisfy exceptional growth in demand for data,’ said Vodacom CEO Shameel Joosub in March.

Over in East Africa, Kenya’s dominant mobile operator Safaricom has also seen its business spurred by data consumption, with the company’s data revenue growing by 43% in the past year – a trend the operator has felt the impact of for a number of years.

While CEO Bob Collymore says it is important to focus on the cost of data to attract consumers, he also underlines the impact of other factors affecting data uptake, such as the need for lower device costs. ‘For quite a few years now, we’ve been conscious of the importance of growing our data business and this is why we’ve seen consistent growth in customer numbers, average usage per customer and ultimately a 43% growth in data revenue in the last year,’ says Collymore. 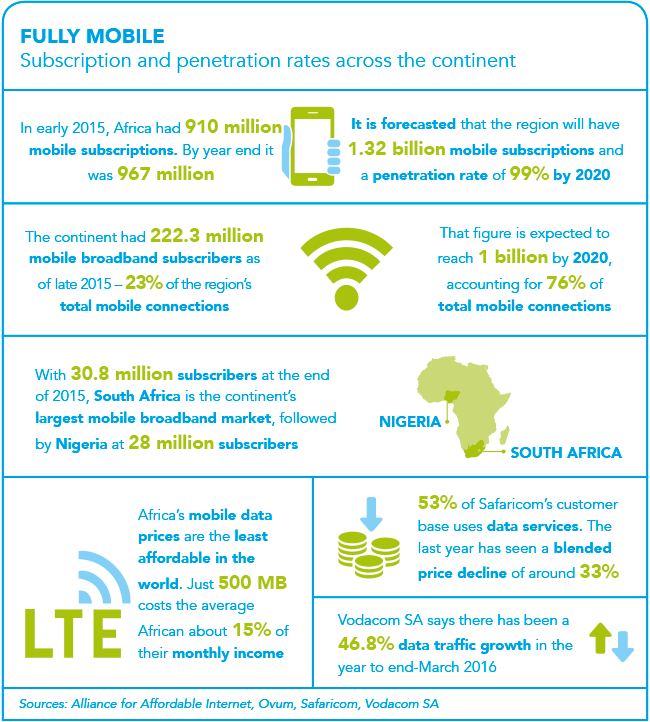 ‘We’ve concentrated on getting the pricing right in the past year, which has resulted in a blended price decline of around 33% over the year. The biggest challenges remain the cost of smartphones and digital literacy.’

Currently, according to Collymore, 53% of the company’s customer base uses data services. However, lower data costs will ‘inevitably’ help the operator reach new customers, particularly the lower-income segment. In addition, he highlights the impact of rapid changes in consumer preferences between over-the-top (OTT) providers on the types of data offerings that operators need to provide.

Industry analysts also pick up on this rise of OTT players witnessed by operators such as Safaricom. According to Ovum research analyst Danson Njue, a key impact of the cost of data is the ability of consumers to make use of evolving OTT services. He believes lower data costs will have a critical role in shaping how consumers communicate.

For Alliance for Affordable Internet, the situation is straightforward: lower data costs will positively impact private consumers and businesses, and even support governments in their work – and as such, industry-wide action needs to be taken.

‘The economic and social benefits of the internet are greatest when everyone can access and use it frequently, so driving down these data costs is essential. Doing so will boost economic growth, help governments to deliver services efficiently and give citizens access to vital information in areas such as health, education and legal rights,’ according to Makwakwa.

Operators have a role to play in achieving these benefits, she says, by being transparent and fair with their data pricing – as well as seeking to invest intelligently in a way that enables internet costs to decline, such as through sharing infrastructure.

However, Makwakwa believes the ball is not solely in the court of operators. She says governments must lead by example and implement policies that directly support improved internet affordability across the spectrum of African populations. ‘Governments must put connectivity at the heart of their development strategies. They should commit to ensuring that 1 GB of data costs citizens no more than 2% of monthly incomes; slash taxes on smartphones and computers; and roll out public access programmes at places like schools and libraries to ensure even the poorest can get online regularly.’

Researchers at the University of Johannesburg’s Institute for Intelligent Systems are developing... END_OF_DOCUMENT_TOKEN_TO_BE_REPLACED

The Nigeria Electrification Project (NEP) is working towards its target of ensuring... END_OF_DOCUMENT_TOKEN_TO_BE_REPLACED

Angola’s coffee value chain is about to benefit from a EUR12 million investment,... END_OF_DOCUMENT_TOKEN_TO_BE_REPLACED