The best indication that the conference and meetings industry has taken a massive leap into the future is when its own worldwide umbrella body decides to go virtual for its annual congress, converting the traditional face-to-face gathering into its first-ever hybrid convention. Up until the coronavirus outbreak, in-person meetings were the raison d’être, the bread and butter of the International Congress and Convention Association (ICCA) – whose African Chapter incorporates the continent’s major international convention centres (from Arusha and Addis Ababa to Nairobi, Maputo and Lusaka to Durban and Cape Town) and other leading venues (such as Sun City and Sandton Convention Centre), as well as industry players in meeting management, meeting suppliers and support, transport and destination marketing.

The pandemic-related restrictions on gatherings and travelling affected the sector dramatically. As a result, the African events industry had to reimagine itself by shifting from a format built around personal face-to-face contact and physical interaction to one based on low-touch, physical distancing and online technology. For the ICCA Congress in November 2020, this meant exploring a new interactive, flexible format that gave delegates the choice between attending the live event at the main host destination of Kaohsiung, Taipei, or at one the seven regional hubs, or participate virtually. And it’s this combination of in-person and online meeting that makes it a ‘hybrid’ event.

Century City Conference Centre in Cape Town was able to host the high-level hybrid congress after upgrading its facilities with cutting-edge digital solutions. Its virtual conference centre consists of two fully equipped, on-site video-production studios and a digital platform, run by the in-house virtual events team. However, the virtual aspect is an additional service that will complement but not replace the physical offering, says management. 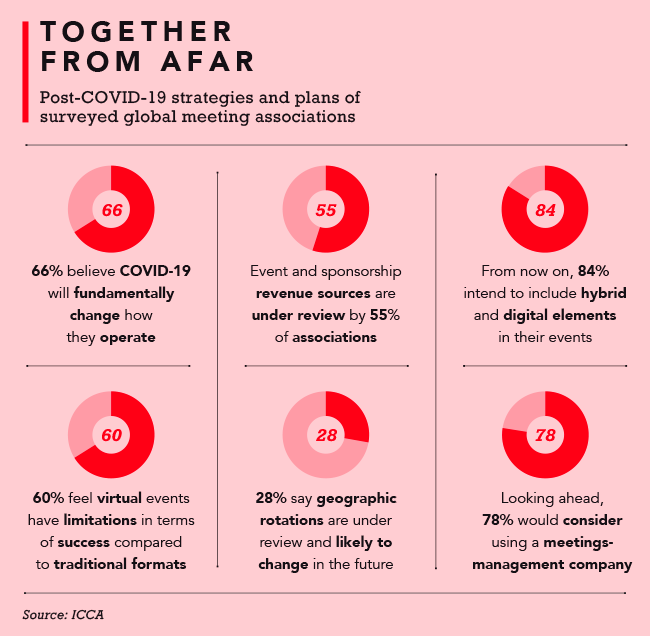 ‘We are constantly scanning the technology horizon for advances that offer more value to our clients,’ says joint CEO Gary Koetser. ‘The issues we are facing today because of the pandemic have only accelerated the need for digital solutions, which give event organisers the scope to include delegates or speakers literally from anywhere in the world. Our new virtual conferencing solution offers a hybrid option with best-of-both-world features of a physical and a virtual event combined.’

All across the continent, it’s been a rapid learning curve as the demand for virtual conference solutions continues to soar.

‘We’ve seen a massive increase in demand, and have held 112 virtual events between mid-April and the end of September alone,’ says Taryn Westoby, head of events at Arena Events, based in Johannesburg. As a rule of thumb, her team can comfortably host one physical event per day, but with virtual functions this increases to three events in 24 hours. ‘We can either host the entire event online, which requires no venue. Or we can film events such as award ceremonies before a green screen in a recording studio and live stream them.’ The real losers, she says, were the physical venues. ‘I know that first-hand because we were about to re-launch our own venue, Empire in Parktown, on 19 March, but had to put it on hold.’

A large number of conferences and expos had to be postponed but as the crisis with its government restrictions across the continent dragged on, businesses increasingly felt they had to ‘go virtual or go bust’.

Annemarie Roodbol, senior communications manager of Cape Town-based Clarion Events Africa, says her company was already hosting webinars on a regular basis when COVID-19 posed the challenge, suddenly having to take major events such as Nigeria Mining Week and DRC Mining Week online. ‘We’re working closely with the host ministry and had to speak to all our stakeholders,’ she says. ‘All our long-standing sponsors are now supporting the virtual event. Business goes on. In May, our African Utility Week became the continent’s first large virtual energy event.’ She is unsure when Clarion will be able to host full in-person functions again, so the live event at Cape Town International Convention Centre (CTICC) had to be postponed until May 2021.

Incidentally, the CTICC now also has a virtual event offering. ‘We are open and have found new ways to connect your content to an audience anywhere in the world from our new studio broadcast facility,’ CTICC chief executive Taubie Motlhabane said on social media in September. ‘Reviving Cape Town’s tourism economy one event at a time.’

In another tweet, she posed, thumbs up, with the mayor and other officials in front of a green screen. ‘The retrofitted studio offers clients flexibility in terms of layout, with a customised set design and a LED green screen wall,’ said Motlhabane, who in July was elected as ICCA chapter chair of the African region, narrowly beating her Nairobi counterpart from Kenyatta International Convention Centre. ‘These spaces can be used for panel discussions, lectures, webinars, a demo kitchen or even a full band for music performances. Clients can broadcast from an on-site facility to a remote, off-site audience.’ This latest service may have contributed to the CTICC clinching 74 events and more than R53 million in revenue for the period October 2020 to June 2021.

Another major South African venue, Durban International Convention Centre (Durban ICC), has added a range of virtual conferencing solutions, including live streaming, remote presentations, hybrid events and video-on-demand to its existing market positioning. ‘We’ve had to reinvent how we do events and the virtual space has become the new normal for us,’ says Scott Langley, marketing, sales and eventing director for Durban ICC. ‘We streamed our first collaborative hybrid event nationally for a local association in September 2019, well before COVID-19. Since the start of the crisis, we have tried to minimise event cancellations, with our technology making it possible to convert some meetings into online events. Many of our clients are financially reliant on their events, so this helped save their businesses. By taking their events online, they tend to reach much larger audiences than they would have with a traditional live event and they can monetise them accordingly.’

At its best, virtual conferencing is an equaliser that levels the playing field by giving access to those unable to attend a physical event – for reasons ranging anywhere from cost, time and logistics to visa restrictions, public health requirements and, most recently, travel bans. This ‘anywhere, anytime’ access has huge potential for Africa, where it opens up platforms for local experts and professionals to actively engage with their global peers.

‘While we have the Durban ICC as our home venue, we can also stream events from anywhere in the world and patch in speakers from New York, Paris, Lagos, you name it,’ says Langley. ‘We made the choice to bring the tech in-house to give us flexibility to customise the system around the needs of specific events. Our system can accommodate 1 000 delegates in multiple live streams for parallel sessions.’ It also tackles serious concerns such as cybercrime and downtime through internet connectivity or load-shedding issues.

The technology for hosting a conference is far more complex than that for webinars or basic online office meetings, as the platform may have to handle regular event-management tools (such as registration, ticketing, email marketing, reminders, attendee management) in addition to the live streaming and recording of the programme (including parallel sessions and panel discussions) plus engagement and networking features (such as moderated Q&As, live chat, speed networking and on-demand personalised experiences).

At most meetings and conferences the networking is crucial. ‘The big thing is not just the talks, which are interesting and you learn a lot, but our convention is about networking and exchanging ideas,’ says Lisa Reynolds, who as the new CEO of the Green Building Council of South Africa (GBCSA) was faced with the dilemma of how to organise an annual convention during the pandemic that would still create excitement. The solution was a virtual, immersive convention that, with the help of virtual reality and gamification, combined both the educational and the networking aspects. As a bonus, the event’s carbon footprint was reduced – a significant goal for the green building movement.

The GBCSA’s first virtual convention was hosted on the VirtuWorks software platform, which invites each participant to create an avatar of themselves and move around the hyper-realistic event; walking from the lobby into the 1 000-seater auditorium or the expo with its stands. Just like the real-life event, there’s the chance to ask questions, meet in smaller groups and network individually. A click on another delegate’s avatar will reveal their LinkedIn profile, enabling you to decide whether or not to make contact.

A custom-built digital environment such this captures most aspects of a live event and offers improved efficiency and greater access. Yet despite the obvious advantages of virtual conferencing, the industry sentiment still finds face-to-face interactions and the establishment of trusted relationships in person irreplaceable. So while virtual tech is here to stay, the most likely post-COVID-19 conference format will be hybrid events that combine the best of the old and the new.

An African screenwriters residency incubator has partnered with Netflix to create a... END_OF_DOCUMENT_TOKEN_TO_BE_REPLACED

African countries are betting on a cloud-based health-management system to track COVID-19... END_OF_DOCUMENT_TOKEN_TO_BE_REPLACED

A system using satellite imagery to predict electricity consumption has been launched... END_OF_DOCUMENT_TOKEN_TO_BE_REPLACED