On the face of it, there’s not much to Potchefstroom. Set on the banks of the Mooi river, about 120 km southwest of Johannesburg and 45 km from Klerksdorp, Potchefstroom (population 43 448 in the 2011 census) feels to the first-time visitor like a quiet, unremarkable town in South Africa’s North West province. Yet Potch is Africa in a microcosm.

It’s a student town, with thousands of young minds attending or working at its five tertiary institutions, 30 schools and several research centres. It’s an agri-industrial town, with a thriving chicken industry; and a military town, with a South African National Defence Force base. It’s a sports hub, with its 1 400 m altitude making it particularly useful for high-performance training. (Winners Spain used it as their base for the 2010 Fifa World Cup.) And between those millennials, researchers, soldiers, homes, farms and businesses, it’s a town that demands a huge amount of data.

Johan Kruger is CEO of Safricom, a tech and telecoms company that provides fibre connections to the local area. Over the past few years, Safricom has rolled out fibre connections to most of those homes, farms and businesses. ‘We’ve built fibre throughout town,’ he says. ‘We basically have fibre in every street, and we’ve deployed 50 km of fibre this year alone. It’s all over. And there’s such a demand for it, we can’t lay our fibre fast enough.’

In Potchefstroom and across Africa’s more mature markets, fibre has rapidly become the internet connection of choice among consumers. And what started out as fibre to the home (FTTH) and fibre to the business (FTTB) has long since transformed into fibre to the X (FTTX). This has allowed fibre providers to segment the market, providing customised solutions to those Hs, Bs and Xs.

‘We operate regionally, so we’re trying to service the different sectors instead of just doing FTTH,’ says Kruger, reflecting that broader trend. ‘We’ve developed different products for farms, businesses, homes and students. Recently we’ve been focusing on the student housing market, because there are about 16 000 students in Potch. We’ve installed fibre in a few thousand student apartments.’

Safricom is able to offer student-friendly pricing because of the size of the market, but also because the technology has reached a tipping point. ‘The backhaul cost is getting so much cheaper, we can offer specific pricing for the student market.’ A recent report by tech research firm BMIT confirms this is true across South Africa: FTTH prices have dropped sharply over the past three years, with uncapped gigabit-per-second fibre connections that previously cost around R40 000 per month now going for less than R3 000.

‘Entry-level prices have declined to the extent that they are now affordable to most broadband households,’ according to the BMIT report. ‘The biggest shift has been at the upper level of the market, both for high-speed capped services and for typical 20 Mbps uncapped services – where average prices have fallen by a third.’

Little wonder then, the report notes, ‘that customers have rushed to adopt fibre broadband services. The problem is not with the demand, but with the ability to service the demand quickly enough’. Kruger says that while Safricom has been serving Potchefstroom’s student market for more than a decade now, that service was previously delivered through WiFi hotspots. ‘The truth is, WiFi doesn’t always work that well,’ he says.

‘With fibre, people are willing to spend more money on it because it’s a much better product. While ADSL and mobile both have cap limits, fibre provides basically unlimited capacity – and that makes a big difference. With WiFi hotspots, the students were using 20 GB of data a month. Now, with fibre, they’re using 200 GB a month.’ How are those students spending all that data? Exactly as you’d expect they would. ‘There are a few hundred new student apartments being built every year in Potch, and in most of them they haven’t been installing DStv,’ says Kruger, referring to South Africa’s satellite pay TV service.

‘In one complex we did at the beginning of the year, there were about 100 units and only three students who actually took DStv. That shows you how the demand for DStv is dropping. If they do want to watch live sport, the students will just use their parents’ online DStv account login, which is perfectly legal. But they generally get their entertainment via internet-streaming services like YouTube, Netflix and so on.’

Video streaming demands a stable, high-speed connection, which is exactly what fibre offers. But streaming entertainment is not the only driver of data demand – and, in turn, of demand for FTTX connections. ‘You should see how much the students use WhatsApp,’ says Kruger. ‘It’s almost uncommon for them to call each other. All they want – or need – is data, and that’s benefiting us because it means they are willing to spend money on fibre.

‘We saw this trend emerging over the past two or three years, and this year we’ve been inundated with requests to retrofit fibre into existing complexes.’ 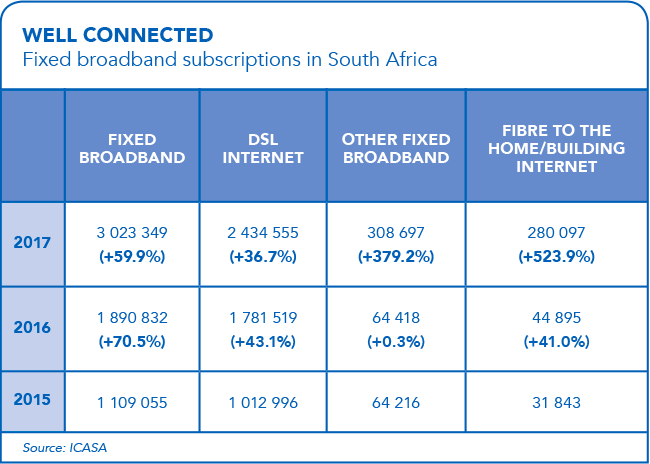 Again, the reality of what Safricom is seeing on the ground is reflected in research data. A 2018 digital report compiled by We Are Social and Hootsuite notes that Africa’s internet users increased by 20% (73 million) in 2017, while the continent’s active social media users grew by 12% (20 million). The dominant messenger app in sub-Saharan Africa is WhatsApp – followed by another Facebook-owned company, Messenger.

‘More than half of the handsets in use today are “smart” devices, so it’s increasingly easy for people to enjoy a rich internet experience wherever they are,’ according to report author Simon Kemp. ‘Social media use continues to grow rapidly too, and the number of people using the top social platform in each country has increased by almost 1 million new users every day during the past 12 months – that’s more than 11 new users every second.’

FTTH and FTTB imply data connections to a fixed point – specifically, the home or the business. And while that makes sense for varsity students who’re mooching around their dorm rooms, messaging their mates and streaming YouTube clips, it doesn’t really speak to Africa’s ever-growing demand for mobile data. Or does it?

Addressing delegates at the 2017 FTTH Council Africa Conference in Cape Town, council president Andile Ngcaba hinted at how fibre infrastructure will enable the coming roll-out of 5G mobile communication. ‘5G is no longer regarded as a spectrum-based network but rather a platform that is scalable, segmentable and designed for the internet of things. The speeds it will achieve are unprecedented.

Latency is expected to be 1 millisecond,’ he said, adding that ‘as industry, we commit to work with the South African government, with SALGA [South African Local Government Association] and with other African governments to ensure not only the infrastructure, but any enabling policies and legislation, is ready, so we can move quickly into the next generation of technology.’

‘As things stand right now, FTTH simply does not have an equal,’ says Juanita Clark, CEO of the FTTH Council Africa. ‘Not only is it faster than any other available connection, the price points are very attractive. Add to that the cost of data, and 5G as a replacement for FTTH is not seen as a serious rival

‘Keep in mind that in order to achieve 5G you will need deep fibre, so in order for 5G to deliver on its promised speeds you will need to have an antennae within 200m of your home. The further the antennae, the more latency and lower speeds, so in effect you would have a fibre connection pretty much on your doorstep,’ she says. ‘We believe consumers will still opt for a fibre connection.’

5G is not expected to replace fibre. If anything, the two will work together, with fibre providing unbeatable speed and reliability to homes and businesses, and 5G providing the convenience of high-speed mobile data. Fibre providers are already looking at ways to maximise their infrastructure investment by enabling open access, where multiple ISPs and telecoms providers are allowed to use it to provide services.

‘5G is definitely on our radar,’ says Kruger, speaking for Safricom as well as the broader fibre industry. ‘Currently we offer limited open access on our network, but we will go full open access in the next year or so. Then if you get the right partner-ships with the right service providers, they will also have their relationships with the mobile operators.’

Demand for data is growing across Africa, whether in Potchefstroom’s varsity housing, Johannesburg’s financial hubs, Nairobi’s ‘Silicon Savannah’, Lagos’ marketplaces or Kigali’s start-up incubators. And as the continent’s fibre players – large or small – are finding, the demand for fibre to provide that data is only growing with it.

Ghana has opened its first farmer-owned cocoa fermentation centre. The facility, at... END_OF_DOCUMENT_TOKEN_TO_BE_REPLACED

An initiative supporting efforts to ensure the continuation of education amid the coronavirus... END_OF_DOCUMENT_TOKEN_TO_BE_REPLACED

The Namibian government is rolling out a NAD500 million COVID-19 loan scheme... END_OF_DOCUMENT_TOKEN_TO_BE_REPLACED