Utility providers across Africa are facing more than their fair share of challenges in supplying the vast continent and all its citizens with essentials such as energy and water. However, emerging technologies – big data and smart metering – are slowly being implemented by providers, with substantial benefits. These technologies are enabling service providers to improve their quality of service, reduce loss of supplies and boost revenues. For consumers, a new era of improved, accessible basic services is being ushered in.

Although mobile phones are near ubiquitous across the African continent, there are still approximately 300 million people living in the sub-Saharan Africa region without access to an improved water source. While this may appear to be an infrastructural challenge and inherently supply-based problem, poor service delivery is the ‘hidden water crisis’ and detrimental to water service providers as well as consumers, according to the GSM Association (GSMA).

Poor service delivery causes high financial losses for providers, leaving them with insufficient funds for infrastructure upkeep and improvement – further exacerbating the water access gap. Part of the problem is the lack of data. As such, water providers are now partnering with technology companies and mobile operators to trial the use of mobile-based data collection, to help improve the service delivery of water.

In Africa, the GSMA has supported two mobile technology-driven data collection trials. The first one in Angola asks nominated water source caretakers to leave missed calls on designated numbers to signal the status of their water source, which is then processed by internal smart machines. The second is in Rwanda, making use of GSM-enabled smart sensors installed at water sources. These projects have already concluded that there are many benefits to gathering data for the improvement of water utility provision.

Access to real-time information on network functionality – for example, open and closed supplies or leaks on the network – allows providers to make data-driven decisions and reduce their non-revenue-making water. They are able to quickly respond to problems on their water supply network – the Rwanda-based project saw a 64% drop in repair time, thanks to the use of mobile-powered data. 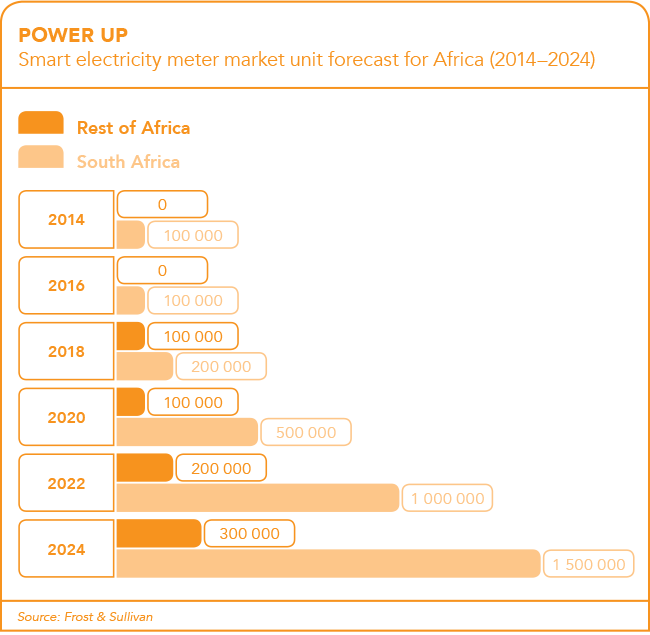 As the quality of the service is improved – which is a benefit to consumers – customers become more willing to pay for the water they consume, says the GSMA. The benefits of such data-oriented projects in the utility provision space is acknowledged by the fact that in Rwanda, the project secured ongoing funding from the government to roll out the technology in other regions of the country. While in Angola, the project has also been scaled up to the capital.

According to the GSMA: ‘Currently playing a small but growing role in the water value chain, technology providers and MNOs [mobile network operators] are just discovering the opportunity to support the delivery of water services.

‘They could prove strong partners in the longer term, providing their expertise to develop smart, context-specific technology and help water service providers reduce their operational inefficiencies.’

Another role for smart meters concerns better energy efficiency. In the sub-Saharan Africa region, many electricity markets are characterised by significant technical losses, ranging between 30% and 40%. This is caused by ageing grid infrastructure and losses resulting from illegal connections, which have significantly impacted utilities’ revenue streams.

Mncedane believes that the ideal technology to achieve this is smart metering. ‘Smart meters are proving to be the optimal technology that will modernise the region’s grid infrastructure, enabling utilities to understand more about every aspect of their grid performance and the condition of grid assets,’ he says.

Smart metering projects have been trialled or implemented in a number of African countries such as Kenya, where state utility Kenya Power placed 5 000 smart meters in operation around affluent areas of Nairobi as a trial, with a view to distributing half a million units if successful.

However, Mncedane says that South Africa offers the most promising market in the region for growth of smart metering technologies. In Johannesburg, for example, City Power began the roll-out of 120 000 smart metering units in 2014, with the aim of effectively managing the domestic load, and a long-term goal of introducing a time-of-use tariff. And according to Frost & Sullivan, it is estimated that in South Africa in 2014 more than 100 000 smart metering units were in the market, and that figure doubled by 2015. However, for the rest of Africa, the figures are negligible, with the research analysts saying the remainder of the sub-Saharan African region combined will only see 100 000 units in action by 2017.

Mncedane says that power suppliers and utilities should work to speed up the roll-out of smart meters in order to benefit from the power of big data to improve operational efficiencies and reduce costs.

‘It is clear that smart meters as an enabling technology for big data will play a vital role in modernising the sub-Saharan African grid infrastructure,’ he says.

Working outside the scope of the energy grid to answer the need for energy supplies – particularly in rural areas – innovative private companies have been implementing advanced technologies and business models in their service provision from inception. For example, Steama.co operates smart metering systems across East Africa, enabling alternative energy providers to sell their supplies direct to consumers in rural areas and essentially providing a ‘last mile’ service.

Steama.co’s meters automatically sync client and user data with the cloud. When a subscriber’s electricity use exceeds their allowed – or paid for – amount, the cloud signals to the relevant smart meter to switch off. In addition, the company offers payment solutions, allowing rural customers to pay their energy providers via mobile money, creating a seamless cashless system for rural consumers to access pay-as-you-go energy – and for energy providers to collect payment from unbanked rural consumers.

This is only one example of how ‘smart’ meters can be and Koen Peters, executive director of the Global Off-Grid Lighting Association says there are substantial variations in what types of innovation are integrated in the different technologies already available on the alternative energy market.

According to Peters: ‘The term “smart meter” typically refers to equipment that intelligently meters energy consumption, but the real “smart” – or game-changing – part of the technology in solar home systems is that it enables a control over the solar home system, which goes quite a bit further.

‘How many other capacities such smart meters have – beyond this controlling role – varies from one technology to another. Some are pretty smart indeed and allow service engineers to closely monitor the status of hundreds of thousands of systems simultaneously around the clock, and sometimes repair solar home systems from thousands of miles away.’

The innovation coming out of the private sector alternative energy space offers an idea of where big data and smart metering technologies could lead to in the future, should these market-leading technologies be adopted by public and private-sector utilities.

The first transshipment cargo has docked at the new deep-water Port of... END_OF_DOCUMENT_TOKEN_TO_BE_REPLACED

A US$50 million trade-finance facility has been created to help support Africa’s... END_OF_DOCUMENT_TOKEN_TO_BE_REPLACED