Earlier this year, South African telecoms company Vox Telecom released a statement predicting that South Africa’s fibre-to-the-home (FTTH) and fibre-to-the-business (FTTB) roll-out would reach 3 million homes by 2020. It sounds outrageous – after all, fibre connections used to be a privilege enjoyed only by the richest businesses – but the numbers add up. Telkom has already stated that it plans to have 1 million homes covered by its network by the end of 2018; Vumatel is aiming for a further 200 000 homes; Frogfoot is looking at 100 000; and 40 000 more will be made up by other providers.

Simon Butler, Vox Telecom’s senior product manager for carrier and connectivity says that ‘combined, we could see approximately half a million homes with access to a fibre network by the end of this year’. And that’s just in South Africa. Privately owned pan-African telecoms group Liquid Telecom has already rolled out 25 000 km of fibre across Africa and 10 600 km in Zimbabwe. Currently, 52 African countries are connected to submarine cables, either directly or by terrestrial cross-border fibre-optic networks.

According to Reshaad Sha, Dark Fibre Africa (DFA) executive director and chief strategy officer: ‘The growth in the fibre roll-out and adoption has been explosive, and there is indeed a great deal of activity in the market.

‘We see the entrance of new players, including municipalities who are looking at accelerating the rate of fibre roll-out in their constituencies to connect society; innovate and deliver new services to citizens; manage the city more efficiently; and encourage and attract business investment.

‘Wireless internet service providers are increasing their coverage to areas on the back of fibre backhaul infrastructure, thus increasing population and business access to higher-speed connectivity services.

‘In the FTTH market, we see existing participants and new entrants targeting selected areas and partnering with existing players and channel partners – ISPs [internet service providers], private broadcasters and property developers – to roll out the network and sign up customers in an effort to capture the window of market opportunity that exists,’ says Sha.

It’s a proper bunfight. Every day, all those telecoms players are offering cheaper, better fibre deals, hoping to be the first to capture the market of eager subscribers. ‘It can be described as a land grab at the moment,’ says Sha. ‘Hence the scramble to get in the game and extend market coverage. We have also seen some major investment from financial institutions in this sector, as well as acquisitions.

‘In April, DFA acquired a significant minority stake in SA Digital Villages, which has a proven track record in the FTTH market segment.’

Sha adds that true open-access models promote service-based competition – and that this gives the end-user the greatest benefit of choice, value and price. ‘While this may be a race to connect customers, we know that the quality of the network is equally or even more important than coverage.

‘We have strict quality guidelines, including the depth at which we lay our ducts; signal loss parameters; and preventive maintenance procedures on our routes that have contributed to our network uptime of 99.99% – the highest in the industry,’ he says.

Africa’s fibre boom follows a global trend. According to Point Topics’ latest Global Broadband Subscriber Trends report, published in September, the worldwide total of fixed broadband subscribers is now 793 million. The key take-out from the research was that, while the number of copper-based broadband lines (ADSL and VDSL) fell by 16%, FTTH connections nearly doubled, increasing by 89.6%.

‘As more countries appreciate the impact that effective broadband can have on their economies, they are making great attempts to ensure that their countries are not left behind. Today, almost every country in the world has a broadband strategy, and these are all very ambitious strategies that will rely on high bandwidth technologies, of which fibre is a key infrastructure,’ says FTTH Council Africa chief executive Juanita Clark in a Via Satellite online article. 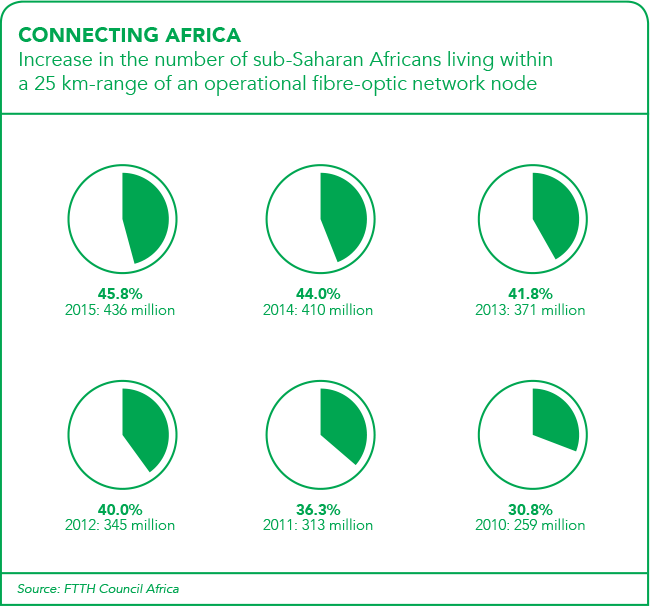 However, Clark warned that the infinite scale of a continent like Africa means that those roll-out rates may be hard to replicate here. ‘As an African, it is important that we distinguish between rural Europe and rural Africa. The sheer vastness of the continent means that many people in extreme rural areas will not have access to FTTH and will always rely on alternative technologies to ensure that they are connected,’ says Clark. But – despite the pile of advertising fliers you’ve probably received in your letterbox at home – Africa’s fibre roll-out isn’t just limited to residential areas or urban centres.

Liquid Telecom says its biggest focus for the South African market is on enterprise solutions. ‘In South Africa, for the moment, we are not targeting FTTH. It’s very opportunistic,’ Liquid Telecom South Africa CEO Willem Marais told ITWeb last November. ‘We will look at partnership models, but most of our focus and capital investments are on national and metro fibre networks.’

This June, Liquid Telecom made good on that promise, entering into an agreement to acquire South African communications network operator Neotel in a deal worth a figure of ZAR6.55 billion. The transaction, which is subject to regulatory approvals, will create the largest pan-African broadband network, giving businesses across 12 countries access to 40 000 km of fibre networks through a single access point. CEO Nic Rudnick said in a statement: ‘We are excited about this transaction.

‘Leveraging the strengths of Liquid Telecom, RBH [Royal Bafokeng Holdings] and Neotel, we will offer an unprecedented fibre network with a unique set of services and international connectivity for telecom operators and enterprises across sub-Saharan Africa.

‘For the first time, African companies will be able to connect with each other in a cost-effective and reliable way, all on a single fibre network. We will also be increasing investments into Neotel to cater for rapidly accelerating mobile and enterprise traffic, enabling us to launch exciting new products and services.’

Open-access, carrier-grade network provider Comsol hopes to reach those areas with Comsol Fibre Connect, a nationwide, open-access, high-speed carrier-grade data network that will connect enterprises in both major metros and small towns. More than 200 towns and cities across South Africa are being targeted for connection.

‘Fibre Connect is aimed at being the first open-access, build-it-and-they-will-come network,’ says Comsol’s chief commercial officer Brenden Pronk. ‘We’re building out in towns like Secunda, Ermelo and so on. The big spin there is that major retailers have got the space available, and they’re looking to service their stores.

‘However, they’re also looking to opportunities in Africa – and they need the coverage. So although typical fibre solutions will cover remote areas, they’re not getting out to the little towns like we are.’

Comsol Fibre Connect is obviously an enterprise solution, but Pronk points out that FTTH will also help to boost SMEs. ‘There are a lot more home businesses these days, and also different types of jobs, where people work off-site or from home.

‘So while FTTH benefits home-based business, it’s also helping your mobile and distributed workforce as well. Previously, without this fibre infrastructure, that was very difficult,’ he says.

Historically, Africa’s connectivity boom has largely been driven by mobile. CNN said it best, reporting in 2012 that ‘Africa [is] not just a mobile-first continent – it’s mobile only’. FTTH and FTTB will ramp that up even further, powering governments, big businesses and SMEs in much the same way that mobile has traditionally powered the continent’s mobile-carrying sole traders and digipreneurs.

‘Mobile has been popular on the continent, since it filled a huge gap for voice services that could not be rolled out at speed, scale or at the capex investment points that could be reached by fixed lines to achieve similar levels of network and population coverage,’ says Sha.

‘Mobile data services grew on the back of these network deployments as technologies evolved from GSM through to 2G and 4G, delivering higher connectivity speeds. However, mobile technologies are best-effort and contended services, which make them unsuitable to deliver high-bandwidth services such as HD video streaming, gaming and rich-content services.

‘The growth in video content consumption, virtual reality and augmented reality content will place increased demand for reliable high-speed connectivity in the future. These factors will contribute to the increased demand for fibre connectivity to the home, but this will vary from country to country, based on the maturity of the individual markets, as well as the barriers to adoption that may be present in these markets,’ he says.

Sha adds that business on the continent would also require stable high-speed bandwidth connectivity to deliver business services and applications such as collaboration (voice, video conferencing and virtual meeting rooms) and enterprise resource planning solutions. ‘The adoption of these services in both private and public cloud models will continue to drive the demand for stable, high-speed fibre-based connectivity,’ he says.

According to Pronk: ‘FTTH is a big opportunity. It’s a game-changer. It’s a big enough pie for everybody to work together and have a piece of it. And although fibre is penetrating the market a lot faster now than it has in the past, there are a few areas that are still in the shadows.’

If the current growth rate is anything to go by, those areas won’t be in the shadows for very much longer.

Digital data technology, as well as barcode scanning, will be employed in... END_OF_DOCUMENT_TOKEN_TO_BE_REPLACED

Farmers in East Africa have a free, new mobile tool at their... END_OF_DOCUMENT_TOKEN_TO_BE_REPLACED