In cities and towns across Africa, workers have frantically been digging up pavements and laying cables, building a rapidly expanding broadband fibre infrastructure. In Nigeria, broadband penetration reached 40.14% in May 2020, according to Nigerian Communications Commission (NCC) estimates, as the country continues to deploy some 80 000 km of national and metro fibre backbone. In Kenya, meanwhile, the number of fibre broad-band connections increased 53% year-on-year in 2019 as fibre networks reached beyond the major centres and into the country’s suburban and rural backwaters.

But that’s just the first step. Fibre, in and of itself, was never the end goal. Ultimately, the fibre cables that are being laid in Lagos and Mombasa, in Kigali and Cape Town, and across the continent, have a far bigger picture in mind.

In January 2020, Don Rosenberg wrote an opinion piece for the WEF’s annual meeting in Davos. As executive vice-president at global tech firm Qualcomm, Rosenberg is used to seeing the future before it happens. Yet even he could barely contain his excitement. ‘We live in a time when words meant to represent significant or unique ideas are so overused they have been trivialised,’ he wrote.

‘“Revolutionary” is such a word, a victim of hyperbolic marketing that has rendered meaningless a term meant to evoke profound change to our world. When everything is “revolutionary”, nothing is. Yet here I am, unable to find an alternative as comprehensively descriptive of 5G and the infinite number of ways the newest generation of wireless technology will change our world.’ 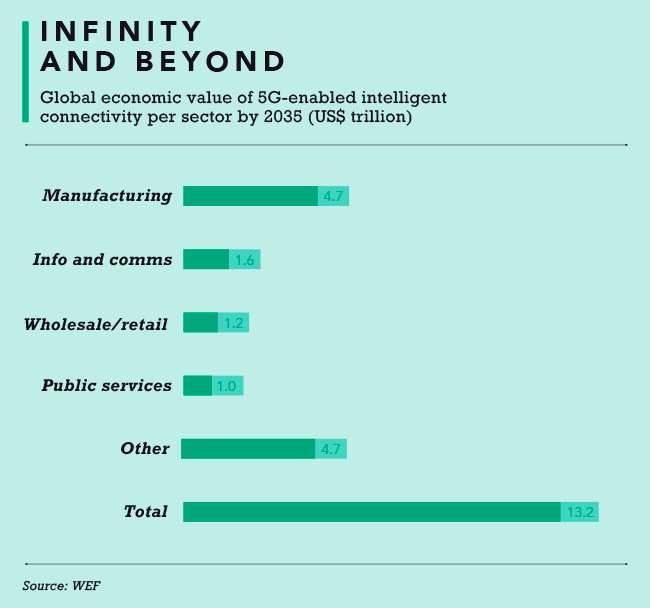 That’s some endorsement, and it merits closer examination. 5G is the fifth-generation technology standard for cellular networks, and the planned successor to the 3G and 4G networks that currently provide connectivity to most mobile phones. The first stages of 5G deployment began in 2018, just as Africa was rolling out its own fibre projects.

But, as Rosenberg explained, while 3G put the mobile internet in your hand and 4G gave us mobile broadband, 5G will connect everything and everyone.

‘The technologies within 5G were and continue to be designed to vastly expand network capacity so that cars, utility grids, appliances, medical devices, industrial machinery, homes, cities, farms and more can all be connected,’ he wrote.

‘And 5G will reduce delays and improve reliability, thereby enabling mission-critical tasks such as remote surgery, self-driving cars and enhanced public safety; to make possible secure connections so lightning-fast that an entire movie can be downloaded in seconds.’

In order to work, however, 5G wireless networks need the support of a fixed-line fibre infrastructure. Brian Lavallée, senior director of portfolio marketing at US networking supplier Ciena, explains that 5G networks need ‘the almost unlimited bandwidth that fibre-based networks offer’. Citing an International Telecommunications Union report, which tracks the capital investments related to fibre infrastructure at an enormous US$144.2 billion between 2014 and 2019, Lavallée adds that ‘one of the primary drivers for this immense capital investment into fibre infrastructure deployments comes out of thin air, in the form of tomorrow’s 5G radios’. In other words, 5G needs fibre. Lots and lots of fibre.

In October 2019, South Africa’s Minister of Communications and Digital Technologies, Stella Ndabeni-Abrahams, explained what this will mean for South Africa. Speaking at the FTTx Conference in Sandton, she said that fibre is one of the key pillars that will establish the next generation of connectivity and a critical enabler for the Fourth Industrial Revolution.

‘Today we know that fibre is potentially the most critical component of all telecommunications infrastructure. We have come to realise that without fibre we will not enter the 5G race,’ she said. ‘According to the FTTx Council, as at the end of June 2019, about 1.5 million end points have been passed, with a total of over 600 000 connections, comprising over 496 000 homes that are connected and billed, and over 114 000 business premises.’

While those numbers are big and impressive, Ndabeni-Abrahams insisted that they are merely scratching the tip of the iceberg. ‘I have engaged with operators who are in agreement that the amount of fibre that we currently have in place is not nearly adequate to serve the future needs of the telecommunications industry,’ she noted. ‘Further, while acknowledging the ZAR100 billion investment that the industry has made so far, we believe that to achieve our 5G vision at least six to eight times more fibre must be deployed.’

According to the GSMA, the global body representing the interests of mobile network operators, investments in 5G networks will reach US$1 trillion worldwide by 2025, with its investment cycle expected to be longer than 4G. That, in turn, suggests that 4G and 5G will coexist well past 2030.

Dimitris Mavrakis, research director at ABI Research, says that by 2030, 5G’s impact on global GDP could be more than US$7.5 trillion (compared to the US$5.1 trillion contributed by 4G in 2019). ‘We expect that 5G will transform businesses in the same way 4G transformed consumers,’ Mavrakis told Huawei’s recent Better World Summit.

But, as Ndabeni-Abrahams emphasised, investment in 5G requires investment in fibre. The roll-out of fibre-to-the-home (FTTH) and fibre-to-anywhere (FTTx), therefore, continues across Africa, even as the continent sees the first green shoots of 5G implementation.

In mid-2020, mobile operator MTN Group followed rivals Vodacom Group and Rain in launching a 5G commercial network in major centres in South Africa, while in Kenya, Safaricom is expected to roll out its 5G solution any day now.

‘Considering the 4G experience and challenges with data costs, 5G might not appear to be the right choice at this time for South Africa,’ Radhika Gupta, head of data acquisition at GSMA Intelligence, told Mobile World Live. ‘Yet, the success and potential of 5G should not be measured by connections alone, particularly given the wider economic gains 5G will bring by enabling digital transformation. Moreover, with South Africa’s Competition Commission imposing a mandatory reduction of data tariffs, steps are already being taken in the right direction to promote uptake of 4G or 5G. The launch of 5G services is timely in South Africa and, with the right ecosystem partnerships, operators stand to gain by unlocking the numerous opportunities in the enterprise sector. All they need to do is act quick and learn on the way.’

Africa’s telecoms industry could take ‘acting quick’ to mean ‘continuing the fibre roll-out’. As for ‘learn on the way’, Qualcomm’s Don Rosenberg put it best. ‘What most people forget – or are too young to remember – about 3G and 4G is that we had no idea of what new business models and industries would be created in response,’ he told the WEF. ‘The car-hailing services, streaming of movies and live events instantly to and from your smartphone, and so much more, we now take for granted. That’s why I refer to potential 5G use cases as infinite or, at least, only as finite as the frontier of human innovation.’

The first transshipment cargo has docked at the new deep-water Port of... END_OF_DOCUMENT_TOKEN_TO_BE_REPLACED

A US$50 million trade-finance facility has been created to help support Africa’s... END_OF_DOCUMENT_TOKEN_TO_BE_REPLACED