During the 2018 FIFA World Cup, more than 100 million minutes were streamed online on mobile devices in Africa over a span of 30 days. Aired by the mobile television app Kwesé iflix, and accessed by viewers in Ghana, Kenya, Nigeria, Tanzania and Uganda, this was the single-largest live mobile-streaming event ever recorded across the continent, according to research firm GeoPoll.

While this is a standout example, streaming services – and their use – are expected to rise exponentially in Africa, allied with increased smartphone penetration, expanding urban fibre grids and greater access to public WiFi. Research by We Are Social indicates that by January last year, more than half of the Southern African region was online.

In sub-Saharan Africa, more than 160 million new subscribers are expected to be connected by 2025. ‘Being a mobile-first continent means it makes sense that this is where the rapid and dramatic growth will be,’ says William Bird, director of Media Monitoring Africa. ‘As more people get smartphones, and as the basic right of access to the internet is realised, it makes sense that, regardless of economic status, there will be huge growth.’

Most Africans also prefer using smartphones to tablets and desktops, according to IT News Africa. The vast majority, just in excess of 60%, used smartphones against 36.8% using desktops and a paltry 2.9% using tablets. Mobile devices provide easy and relatively affordable access to the internet, and are thus a convenient portal for streaming services ‘This is the way audio visual content is going,’ adds Bird. ‘People want to be able to watch what they want, when they want to and on any device. As video becomes increasingly ubiquitous it will only increase in convenience and ease of use.’

With both US giant Netflix and South African company MultiChoice, via its internet TV service Showmax, commissioning local unique movies and series, the online streaming industry is sparking a new boom in local content production too. ‘Netflix has been at the forefront of this shift, releasing its Originals simultaneously across the world,’ says Arthur Goldstuck, founder of IT consultancy World Wide Worx. Last year, Quartz Africa reported that Netflix confirmed plans to order several Originals African television series. Boasting a US$8 billion unique production budget, the company has already started work on its first Originals African series, Queen Sono. In December 2018, Netflix announced that Johannesburg-based Diprente would make the six-part spy thriller, which is scheduled to launch globally in 2020.

Bird says crucial steps need to be taken to develop and promote local content. ‘There is no doubt with a continent that is getting younger that African people want to watch African content and they can and will produce it.’ Goldstuck agrees. ‘There is massive demand for both locally relevant content and local stories told in movies and series. Along with that, within certain niches, there is a powerful desire to see local actors star in these shows. This is one of the drivers of Netflix embarking on a local Originals strategy, not only in South Africa, but across the world.’

According to company statements, the firm also inked deals with Viceland and ESPN for foreign programming, and recently launched its own content-creation hub, which will produce original shows for its pan-African multi-platform network. Though Kwesé’s parent company placed the pay-TV arm under administration due to economic reasons this August, these deals highlight the potential of the streaming industry. 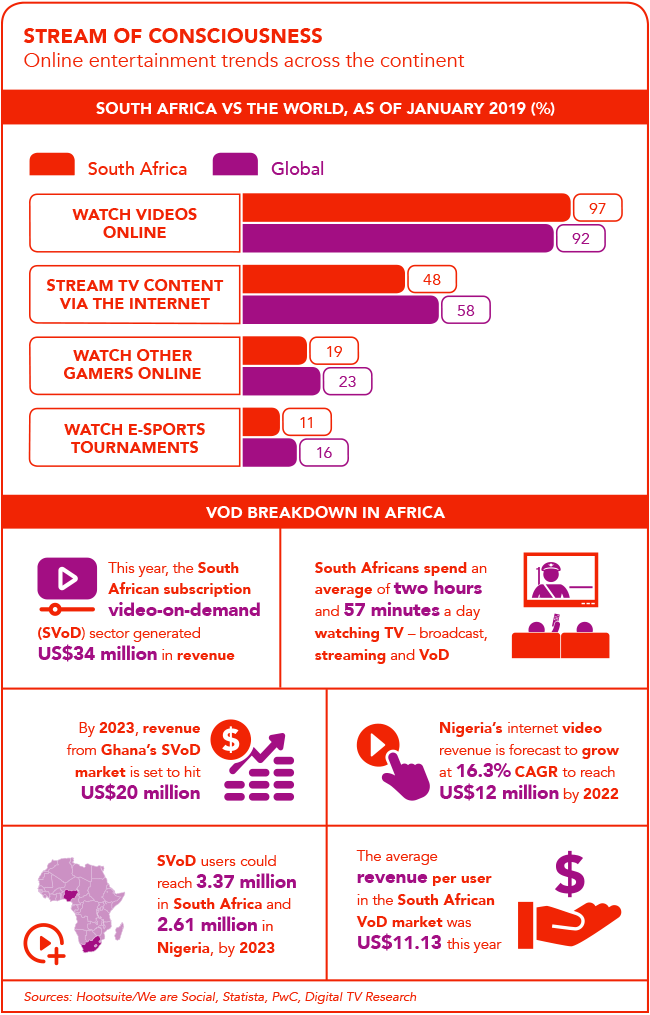 Goldstuck notes that ‘streaming VoD has completely changed the balance of power of content distribution, so that the regional restrictions that have been the bane of our entertainment lives are beginning to disappear’.

As online streaming has increased, traditional pay-TV services have moved to adapt to market changes in order to remain relevant. Earlier this year, the South African Broadcasting Corporation, free-to-air TV channel e.tv and telecoms provider Vodacom signed deals with Hong Kong-based-Viu, a direct online over-the-top (OTT) media service and VoD streaming provider. ‘Co-operation and collaboration would lead to greater innovation in making entertainment content in general more inclusive across Africa,’ says Goldstuck. ‘The idea is that building a strong industry will benefit all, and sometimes aggressive competition with each other will not be the best way to do that.’ This partnership will grant Viu exclusive digital rights to select SABC titles, and South African content will be showcased via its ‘freemium’ business model, which consists of local, regional and original content.

In February, MultiChoice’s Showmax and the South African School of Motion Picture Medium and Live Performance (AFDA) signed a fee-free deal to showcase 18 short films created by AFDA students from their campuses in Johannesburg, Cape Town, Durban and Port Elizabeth. In addition to its live-tv streaming option on the DStv Now mobile app, the media satellite giant announced plans last year to launch a standalone dishless DStv service, which is entirely online, according to Channel24. Though the company already operates its DStv Now unit as an add-on bundle package for subscribers, the new service will closely mirror this existing direct-to-home satellite TV model.

‘Streaming VoD has typically been device agnostic, while DStv has been locked to a large decoder box,’ says Goldstuck. ‘Its app has been limited to specific devices. That is changing, with DStv also now moving to a streaming app for all its programming.’ The media company is also testing 4K streaming, which is a higher resolution, high-definition format for DStv Now.

The main obstacle to growing streaming uptake is the high data costs across the continent. But some companies are finding ways to deliver content at more affordable rates. ‘Even in South Africa, streaming movies and video via mobile data is prohibitively expensive. However, if one signs up to services provided directly by the mobile operators, the cost of data for these services is typically waived,’ says Goldstuck. ‘For specific content, especially educational, zero-rating is an option from most operators.

However, the more viable approach would be to provide more free public WiFi hotspots, allowing people to download content onto their phones at that point and consume it later at home or elsewhere.’ One example of creating a more inclusive market is by lowering data usage while streaming. To this end, South African mobile app Tuluntulu offers low-bandwidth video streaming at about 50MB per hour for mobile users, and content can be downloaded over WiFi and watched later for free.

South Africa’s largest internet service providers are also stepping into the VoD market by offering several different data packages specifically catered to streaming services. Goldstuck says one of the biggest drivers towards the shift between typical pay-TV and streaming is value for money. ‘The flat fee that the SVoD [subscription VoD] providers charge is a fraction of that of DStv’s subscription TV, for far more content.’ Between Vodacom, MTN and Cell C, these offerings range from as little as ZAR3 per hour to ZAR25 per movie rental or R99 per month for multi-streaming platform access.

During the 2018 football World Cup, Kwesé iflix partnered with Kenyan mobile network operator Safaricom to ensure that viewers would have more affordable online access for viewing. The special offering, dubbed Giga Football Passes, gave users 24 hours of unlimited data access to the Kwesé iflix app for less than a US dollar. That perhaps illustrates one of the reasons for that record-breaking 100 million minutes.

African women working in the investment arena have received a US$60 million... END_OF_DOCUMENT_TOKEN_TO_BE_REPLACED

Zimbabwe is growing its status as a battery-minerals hub. The country has... END_OF_DOCUMENT_TOKEN_TO_BE_REPLACED