Sometimes the most effective form of law enforcement is simply visible policing. A cop car parked under a tree is often enough to make speeding drivers slow down; enough to scare off would-be intruders; enough to convince troublemakers that they’d better take their trouble elsewhere.

That’s why security robots are emerging as a new, effective security solution in office blocks, shopping malls and public spaces. But rather than replacing human security guards, these smart machines are there to gather data and deter criminals. Take the Knightscope security robot, for example. In a presentation to the Huntington Park city council in California in June 2019, Knightscope noted how its robot had ‘helped law enforcement issue [an] arrest warrant for burglary and felony property damage’, ‘helped a security guard catch a thief in a retail establishment’, ‘helped eliminate vehicle break-ins’ and ‘helped eliminate trespassers’. Not bad for a 1.5m tall, bullet-shaped device that, in 2017, cost about US$7 an hour to rent.

Those robots can’t physically apprehend criminals or climb stairs. But they can act as a deterrent. As John Santagate, research director of service robotics at the International Data Corporation (IDC), recently told Recode: ‘I use the analogy of the police car parked at the corner. Even when no one is in it, people around the car adjust their behaviour’.

Where security robots – like all smart security systems – show even greater value is in surveillance and data collection. A recent report by OneZero showed that the main purpose of Knightscope’s range of robots is gathering information such as licence plates, facial-recognition scans and the presence of nearby mobile devices. By recording your smartphone’s internet protocol (IP), media access control and IP addresses, the system can record how often you visit a particular area, how long you stay there and when you typically leave.

In the words of a leaked internal report from California’s Huntington Park Police Department, ‘Knightscope’s secret to the K5 robot is simply sensors – lots of them’.

Integrated, data-gathering security systems are now augmenting both the eyes and ears of on-the-ground humans and centralised security hubs. In South Africa, the Kruger National Park recently deployed ShotSpotter’s gunshot-detection system to combat rhino poaching, building on a pilot programme from 2014. The park’s sheer size (it famously covers about as much surface area as Israel) means that most poaching incidents go undetected – and even if a gunshot is heard, it’s all but impossible to know exactly where it happened.

‘The resulting speed and accuracy of the response not only increases our chances of making contact and effecting an arrest but over time we hope will send a powerful message to poachers to stay away.’ The park is integrating its ShotSpotter system with drone-delivered, airborne thermal surveillance technologies, which will help establish the exact co-ordinates of the gunfire.

A report in South Africa’s Mail & Guardian quotes Huawei’s Christo Abrahams describing the firm’s philosophy as ‘“safe city first, before Smart City”, because if it’s not safe, no one will invest there’. Abrahams drew on the example of a Kenyan town where Huawei installed high-definition surveillance cameras and trained local police to use the Smart City system. The crime rate, he says, dropped by 46%.

Abrahams’ quotes in that M&G article revealed the extent of the smart identification software: ‘These recognition algorithms check what clothes you’re wearing, what shoes are on your feet. It actually checks your gait, because everybody’s gait is unique. […] All those algorithms are working together to identify you. The nice part of that is your past now catches up with you. They can take a side image of you and render your whole face, and run it through the camera system, and they will know where you were the last two weeks. Which mall, where you were, in what car you were driving, who is always with you at the mall. They do all those associations through artificial intelligence.’

Meanwhile, security firm VSBLTY recently announced a partnership with digital signage and marketing company Onyx-Cognivas, to install facial-recognition software in residential and commercial properties around Johannesburg’s business hub. ‘We are excited to provide complete smart city-like security solutions in Sandton,’ says VSBLTY co-founder and CEO Jay Hutton. ‘This state-of-the-art technology uses the power of machine learning and computer vision.’ It also uses digital sensors deliberately placed near signs that contain important information, and which require you to look directly at them – thereby letting the system better capture your facial image data. This is a 21st century neighbourhood-watch programme that is setting the standard for collaborative security where citizens, law enforcement and technology can work together to achieve a higher level of community safety,’ he adds. ‘This cost-effective technology will significantly reduce crime and will be installed in over 200 office buildings, hotels and retail locations as well as in Sandton’s residential neighbourhoods.’

Again, it’s a smart, integrated, AI-driven security solution… And again, there’s something unnerving – almost creepy – about it. As South African smart security camera company Vumacam points out, ‘thousands of cameras exist in Gauteng. None are regulated, many don’t have Tier 3 data storage solutions – as storage is very expensive – and it is unclear who has access to the footage’.

Vumacam says it ‘envisions a city-watch solution, whereby security companies and communities are stimulated to work together on a common platform, sharing information between areas’.

It aims to achieve this by accessing South Africa’s growing proliferation of fibre networks. ‘Vumacam realised that there were a multitude of disparate CCTV solutions, often unconnected and with “islands” of uncovered suburbs adjacent to covered suburbs,’ the company states. ‘This left the various solutions disconnected and largely ineffective in tracking vehicles of interest as they would disappear into a blind island area.’

Among other solutions, Vumacam uses the iSentry system developed for the Australian military to detect ‘unusual’ behaviour. However, nobody seems to know exactly what ‘unusual’ behaviour looks like – prompting media outlets such as Vice to accuse these smart CCTV networks of ‘driving an AI-powered apartheid’. Vice quotes an iSentry shift report listing 14 incidents flagging 28 ‘suspicious’ people in the Johannesburg suburbs. ‘Case examples include an electrician leaving his place of work, five people walking together, a person sitting on the road, mail-delivery men and construction workers unloading bricks,’ the report notes. 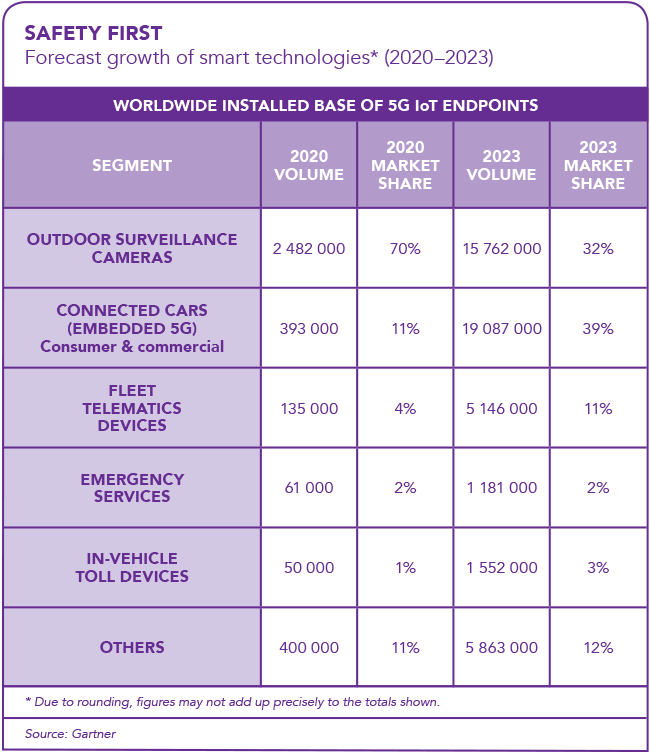 Vumacam responded with a statement that ‘the iSentry system is completely non-biased. It is not pre-programmed to identify race. Unlike many other behavioural analytics software, iSentry is one of only a few that do not have any pre-programming of what is deemed to be unusual behaviour thus removing any forms of programmed-in bias. Our cameras are not spying on citizens or collecting data for any kind of marketing analytics purposes. They face a specific direction and monitor public spaces to serve as a crime prevention and public safety mechanism’.

ShotSpotter, meanwhile, announced in December 2019 that it had received unanimous approval for continued use of its gunshot-detection technology by the City Council of Oakland’s famously strict Privacy Advisory Commission (PAC) after what it called ‘a rigorous review’.

According to PAC chair Brian Hofer, ‘ShotSpotter has proven to be a thoughtful and transparent leader that does what it takes to mitigate privacy concerns. We recognise ShotSpotter as an important tool for public safety and determined that its benefits outweigh the very minimal risks to individual privacy’.

That’s the tightrope that Africa’s smart security systems will have to navigate as the technology matures and becomes more widespread: balancing privacy concerns with the realisation that these technologies work very well indeed – even if just as a deterrent.

Côte d’Ivoire has become the second country to take delivery of COVID-19... END_OF_DOCUMENT_TOKEN_TO_BE_REPLACED

Nigeria is set to commence work this quarter on a complete overhaul... END_OF_DOCUMENT_TOKEN_TO_BE_REPLACED

Burundi and Rwanda are going ahead with plans to build a multi-purpose... END_OF_DOCUMENT_TOKEN_TO_BE_REPLACED