What if you could take a trip to Mars without setting foot in a spaceship; experience the thrill of a roller coaster ride in the comfort of your own home; or get a sense of what climbing Mount Kilimanjaro would be like without actually having to brave those challenging conditions?

This and more is possible thanks to virtual reality (VR) technology. Although in existence for a couple of decades, VR has been mostly used in gaming, but with limitations such as pixelated images and poor graphics, it never really took off. Now, with advances in technology, its potential for use in business has caught the attention of many companies.

This is how it works. With the help of a computer-generated simulation of a 3D image, VR places the user in an artificial or recorded world – typically through equipment such as a headset or helmet. VR, however, should not be confused with augmented reality (AR), which overlays superimposed computer-generated images, information or activities on a person’s real-world environment, says Arthur Goldstuck, South African tech expert and founder of consultancy World Wide Worx.

Goldstuck has been testing VR for around 20 years – since the days when users had to climb into a huge machine to get a feel of it. ‘I’ve always been simultaneously dazzled and underwhelmed by the experience,’ he says. This immersive experience, he adds, is very compelling in games, travelogues and other settings ranging from haunted houses to aircraft cockpits.

However, for a technology enthusiast such as Goldstuck, the resolution offered by most VR content tends to be a let down ‘as one is constantly reminded by pixellation or poor definition of characters that this is not real’. Be that as it may, others still feel a fully immersive VR could potentially represent the future for many businesses.

According to Virtual-Reality.co.za, companies have been using VR to reduce costs, improve decision-making proficiency and become more directly involved in efforts to communicate with others. ‘For firms in the business of creating products that are potentially dangerous and/or could cause harm – and thus require to be put through extensive evaluation processes – VR technology is particularly useful.’

Products can also be tested within virtual environments, which means that any possible threat or risk to employees is significantly reduced. Companies can also offer consumers a 360-degree view of products and even an office space environment.

In February, Goldstuck attended the Mobile World Congress held in Barcelona, where VR stole the show. At this gathering, electronic companies such as LG and Samsung both launched 360-degree cameras able to produce VR content; telecoms equipment firm ZTE built a submarine mock-up in which visitors could experience a virtual ride; while Ford motor company did the same with a VR car seat.

In some parts of Africa, the education sector has seen great progress using electronics, which has made learning more accessible. Already, classrooms have been kitted out with smartboards and students use tablet devices as learning tools – making acquiring knowledge more interactive than ever before. This has laid down the perfect foundation for the onset of VR, as education is the sector that – along with tourism and training – could benefit the most from it, says Goldstuck.

South Africa’s mining education sector was the first on the continent to test the technology for learning purposes. Mining can be a dangerous profession and the fact that after more than a century of digging in the country, miners now need to go deeper than ever before (particularly in gold mines), could result in disaster.

Therefore, in dangerous situations, such as rockfalls, gas explosions, flooding and even earthquakes, it is increasingly important for mineworkers to understand cause and effect when it comes to dealing with these and other hazards, as well as how to avoid them.

One of the first companies to explore the technology in a classroom setting is Kumba Iron Ore. Last year, the firm – a subsidiary of Anglo American – spent ZAR18.8 million on a VR mining centre at the University of Pretoria (UP).

The university says that introducing this level of innovation into the educational space can differentiate faculties by offering unique learning opportunities. Meanwhile from an education and training perspective, the centre will be able to realistically simulate a range of mining functions. This includes accident reconstruction and risk analysis to responding to potential hazards and testing evacuation procedures – all in a low-risk, high-impact learning environment. 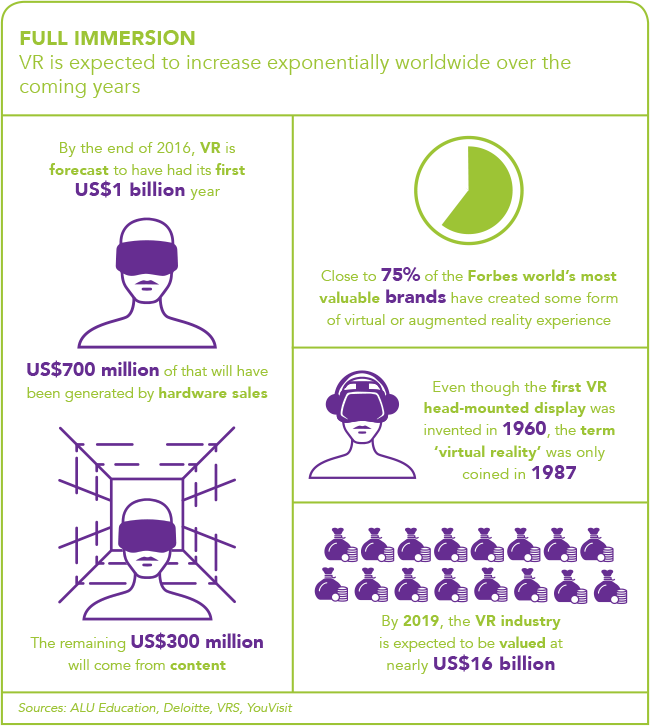 Ronny Webber-Youngman, head of UP’s mining engineering department, says in other parts of the world VR centres have been effective in enhancing mining productivity and mine design. Most importantly, this kind of learning also helped to protect lives through heightened health and safety awareness.

‘By improving the ability of mining engineers to take into account the long-term environmental consequences of their financial and technical decisions in a virtual environment, there will be significant economic, environmental and safety benefits to the industry as well as surrounding communities in the real world,’ says Webber-Youngman.

Also in South Africa, a partnership between the city of Tshwane and EON Reality resulted in what has been called Africa’s first interactive digital learning centre. The ZAR100 million centre, features the latest in VR equipment and learning software, and is large enough to accommodate 50 students each year for a free 11-month course that teaches specialised high-tech skills.

IT Web Africa reports that through the centre (which falls under the Tshwane Vision 2055 initiative), the city hopes to meet the growing need for local relevant VR/AR content and also aims to empower students with the skills to start their own businesses.

Another African country that holds promise is Nigeria. This is according to Olusegun Martins, head of digital marketing at Insight Nigeria. Last year, students at Mate Comprehensive High School in Lagos also got the chance to experience the wonders of VR by going on an educational virtual underwater field trip. Nigerian brands will also benefit from using the technology at events, activations, product launches and for online content in general, says Martins.

‘Nigerian travel and tourist destinations could use this sort of immersive technology to give users a feel of the sight and sounds of their desired destinations. This could really become a game changer here, with users able to experience a teaser of a choice destination or actually even paying for virtual tours without leaving the comfort of their home.’

While on the subject of tourist attractions, another iconic destination in Kenya has also been gaining advances from VR. Twice a year, millions of wildebeest and other wildlife including zebra, gazelle and eland make their way across the Serengeti plains as they travel from Tanzania into Kenya’s renowned Maasai Mara and back again, in what is known as East Africa’s Great Migration.

This movement of animals, which has been touted as one of the new seven wonders of the world, usually occurs during July through to October and is a particularly spectacular sight to witness. VR content company, Deep VR headed out to Kenya in July to film the entire experience using the technology.

Quoted in an IT Web report, Ulrico Grech-Cumbo, co-founder and CEO of Deep VR, says: ‘The wildlife documentaries we all love and have grown up with have always been filmed from the relative safety of a vehicle and as such, have kept viewers separated too. With the advent of virtual reality, the frame of your TV falls away and you’re teleported to the thick of the action.’

Although this type of shoot poses technical challenges, Deep VR developed a payload drone that was designed to pick up and drop cameras into the stampede in order to capture it from the point of view of the animals. They also used other innovative technologies such as the stampede-proof ‘black box’ cameras and remote triggers that increase the triggering distance from 5m to more than 2 km.

It seems then that VR, while still in the trial phase, can not only encourage growth and progression in the education and tourism spheres but businesses willing to explore the technology are also likely to reap benefits.

Digital data technology, as well as barcode scanning, will be employed in... END_OF_DOCUMENT_TOKEN_TO_BE_REPLACED

Farmers in East Africa have a free, new mobile tool at their... END_OF_DOCUMENT_TOKEN_TO_BE_REPLACED