Whereas in 2002 only one in 10 people in countries such as Tanzania, Uganda, Kenya and Ghana owned a mobile phone, there are now almost 386 million unique mobile subscribers in sub-Saharan Africa. The mobile phone industry contributed more than US$100 billion to the region’s economy in 2014.

The growth of mobile use in Africa may have been huge but it is slowing down. Subscriber growth rates are forecast to slow in the second-half of the decade from 14% to 7% as operators face challenges in providing connectivity to poorer, more rural populations.

New technologies, however, are providing more scope for wider availability. Frost & Sullivan Africa’s ICT team leader Anesu Charamba says that LTE/4G networks will play a major part in the next stage of the African mobile story, with the next generation of networks providing wider coverage than before. ‘As economies continue to develop, more stakeholders will be able to access the network, where the key benefit is increased data transmission, meaning greater speed and connectivity,’ he says.

This process is already evident, with the recent launch of LTE by South African operator Cell C, bringing the number of LTE networks on the continent to 50. Mobile broadband generally is becoming more widely accessible in Africa as the prices of smartphones fall.

The significant investment by governments and companies around the provision of free high-speed WiFi hotspots is also changing the way Africans use their phones.

‘What’s interesting is not just the economic enablement that individuals gain when they can access the internet, but there are also multiple over-the-top services, such as WhatsApp, Viber, Facebook and Skype, that individuals can utilise at even lower costs if at all,’ says Charamba. ‘The key point is giving people access to the internet and a platform for connections to, and engagements in, business and economic activity.’

The conversation is moving towards what Africans do with their mobile phones, rather than whether or not they have them

There are other innovative means of providing mobile connectivity in areas that operators have failed to reach. Among them is the data-over-voice technology provided by Silicon Valley-based company Pangea, which recently launched operations in Nigeria.

By downloading the Pangea app, users can send and receive data over the infrastructure used to make voice calls, without needing 3G or WiFi coverage. The app converts data into sound waves, with a short voice call starting in the background to a Pangea server, which contains all requested internet data.

Pangea director of business development Marco Scotti says the greater prevalence of 2G antennas than 3G antennas over most of Africa means there is scope for such technology in allowing Africans to do more with their phones. ‘Business in Africa will be tremendously boosted. In occidental countries, internet ignited an industrial revolution. We believe the impact in Africa will be even greater and faster,’ he says.

How does this change how Africans use their phones? According to Charamba, this increasing growth in connectivity is changing the conversation about mobile use in Africa. ‘A few years ago, the biggest issue across Africa in the mobile telecoms space was that of coverage and, with it, access to connectivity and the internet. 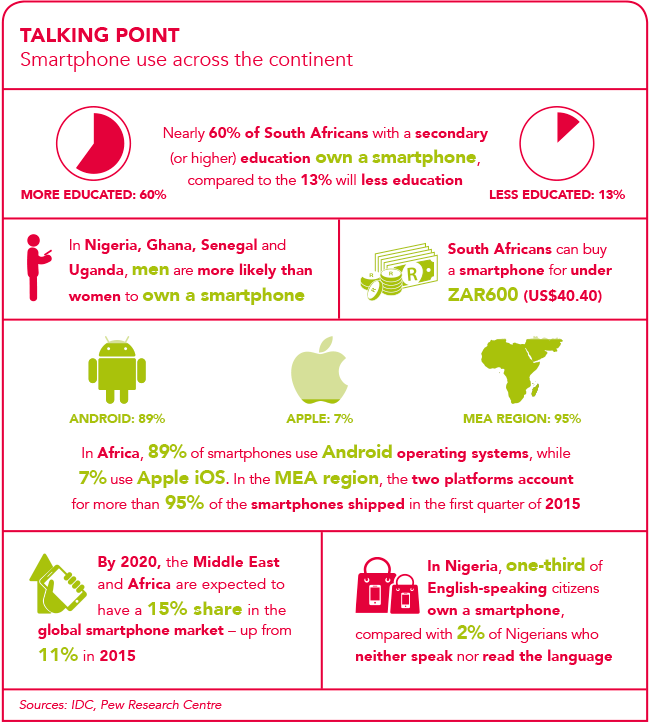 ‘For many markets and indeed consumers, the specifications or capability of technology is the lesser issue – the true issue is applicability and value-add to individuals, communities and businesses,’ he says.

Charamba highlights the growth of mobile virtual network operators on the continent, in which they utilise other companies’ infrastructures to maintain their own network. This is evident with the likes of FNB, which utilises Cell C’s infrastructure in South Africa, and Equity Bank, which leverages on Airtel’s network in Kenya.

‘Their significance speaks to a higher level of customisation of a product towards a specific segment, demonstrating recognition of Africa’s penetration of connectivity in the market, and the necessity of moving towards greater catering to customer needs,’ he says.

So the conversation is moving towards what Africans do with their mobile phones, rather than whether or not they have them. Charamba feels there are a number of exciting developments in the space, not least of which is the internet of things (IoT).

‘At its core, IoT is about data transmission between devices and how that data is used. Where mobiles are concerned, with the proper infrastructure, it allows for limitless possibilities, from increased use of wearables, such as Google Glass or the Apple Watch, to increased integration with other networks, such as vehicles or for retail purposes. As infrastructure improves, and as increasing numbers of consumers access the internet via mobiles and apps, consumers will have greater interaction with their environments,’ says Charamba.

Artificial intelligence (AI) is also seeing huge growth as predictive and data analytics are greatly increased. Charamba adds: ‘With more investment, we will see greater development in Africa on this front in the coming years. What’s interesting is that we’ve already seen robotics, AI and analytics at play in the call centre industry.

‘The continent may eventually move to a situation whereby consumers can access company call centres to engage with fully automated service representatives. Over and above that, a greater step that may happen as mobile and technology firms grow is an African alternative to Siri.’

For consumers, businesses and communities, it has never been a case of the advances in mobile technology that have been key, but rather the application and adoption of them. Charamba expects more innovative uses to develop over time.

IoT and AI may sound like exciting, futuristic concepts, but the increasing prevalence of mobile technology across Africa is changing the way people live – and providing myriad business opportunities – in more basic ways.

Ovum senior research analyst Thecla Mbongue uses Côte d’Ivoire as evidence of how strong growth in the uptake of smartphones will help drive up the use of e-commerce over mobile. ‘Pan-African e-commerce platform Jumia, which has 500 000 monthly unique users in Côte d’Ivoire, said that desktop access is still predominant, accounting for 87% of its visitors in the country as opposed to 13% via smartphones,’ says Mbongue, adding that Jumia also said that smartphones accounted for 27% of the items it sold in Côte d’Ivoire over the year to the end of April 2015.

Aside from e-commerce, other sectors are growing as a result of the growth of mobile phone use. Mobile banking in Africa is often characterised by the success of mobile money services such as M-Pesa and, as a result, mobile banking is extremely popular in countries such as Kenya, Uganda and Tanzania.

However, as mobile technology develops and enters into the hands of more people, more complex financial services can be provided. This is a vital necessity on a continent where only 34% of Africans are formally banked, and as few as 16% make use of formal savings services.

One company that uses mobile tech to change this is Jumo, which partners with mobile operators across Africa to gain access to data on how individuals use their phones. With this information, Jumo then uses algorithms to come up with a ‘Jumo score’ of creditworthiness, identifying what a person needs and garnering enough information to be able to offer them savings and loans products via their mobile.

The company is already rolling out its products across Kenya, Tanzania and Zambia with partners Airtel, Tigo and MTN, using mobiles in an innovative way to increase the spread of financial services across Africa. It has already provided millions of loans.

Similar developments can be seen in the spheres of e-learning and e-health, where the increasing spread of mobiles is allowing for the development of innovative methods to provide basic services to more Africans.

According to Tim Maina, market lead strategist at MPedigree Networks Kenya: ‘Mobile is no longer the most critical ingredient – or rather, it is no longer the “site of innovation and delivery” per se – but instead an integrative point for a broader canvas on which different strokes for different plays are happening.’

Digital data technology, as well as barcode scanning, will be employed in... END_OF_DOCUMENT_TOKEN_TO_BE_REPLACED

Farmers in East Africa have a free, new mobile tool at their... END_OF_DOCUMENT_TOKEN_TO_BE_REPLACED