If you are a numbers nerd with even a passing interest in tech, the South Africa Mobile 2017 report – published last May by Samsung, Effective Measure and the Interactive Advertising Bureau South Africa – would have given you plenty to Tweet about. Yet in among all the bloggable charts and shareable graphics (‘53% of respondents are on Vodacom’; ‘42% use their cellphone for banking’; ‘13% say they use their phone in the bathroom’) lurked a number that, while easy to overlook, revealed a key trend in the sub-Saharan mobile market. While 40% of the survey’s 4 993 respondents reported using Samsung mobile phones – far ahead of Apple (with just 10%), BlackBerry, Sony and six other established manufacturers – some 22% listed their mobile phone brand of choice as ‘other’.

‘Falling prices of smartphones, aggressive operator promotions and growing WiFi/4G penetration are all helping to speed up the adoption of smartphones in South Africa,’ Nikolay Dolgov, general manager of point of sales tracking at GfK South Africa, said in a statement.

He added that fierce competition from Chinese brands is reshaping the local entry-level smartphone market, with the average selling price for smartphones falling despite the weakness of the rand. And then came a sentence highlighting the same trend…

‘Around 25 brands are today contesting the entry-level smartphone market, compared to just six in 2013,’ the statement noted. Given that the average lifespan of a smartphone is – by most users’ experience, as well as by GfK’s own reckoning – about three years, that’s a remarkable figure.

Yet it’s true in other major African markets too. Search on Kenyan online retailer Jumia for a smartphone priced under KSH10 000, and you’ll find previously unheard-of brands including Fero, Infinix, iBrit, Cubot, X-Tigi, Wiko, Vsun, Oukitel, Leagoo, Ctroniq, Hotwav, Fly and Ober all sitting alongside established names such as Huawei, Motorola and Samsung. 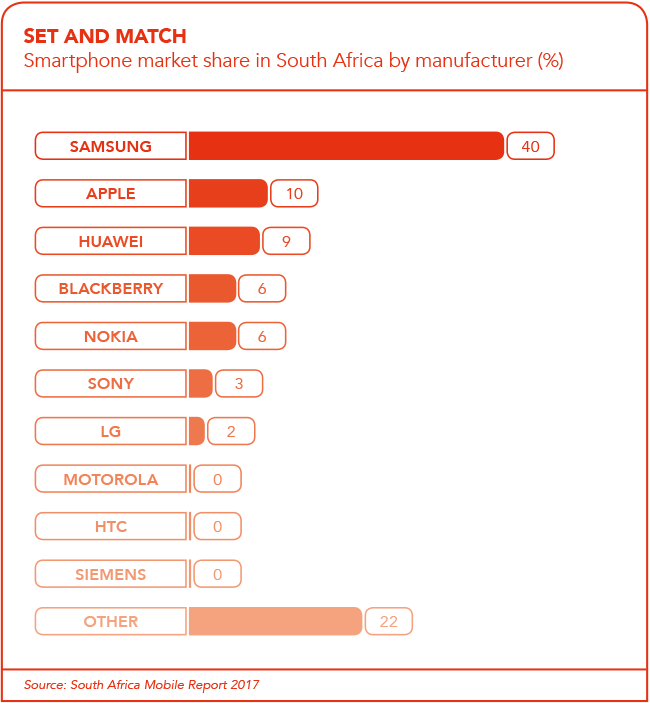 In mid-2017, in its Quarterly Mobile Phone Tracker report, International Data Corp notes that feature phones (that is, mobile phones with only basic features, such as voice calls and text messaging) ‘remained in demand across Africa as the downturn in several key economies puts smartphones out of reach of many consumers’. Shrugging off a Q1 decline in mobile phone sales across the continent, the IDC says that it expects Africa’s overall smartphone market to recover to a state of growth. ‘Despite the tough macroeconomic conditions currently inhibiting much of the region, smartphone prices continue to fall and this will drive their adoption across Africa,’ it states, noting that almost 40% of all smartphones shipped in Africa in the first quarter of 2017 were priced below US$80. That percentage was significantly up from the 28% reported two years before.

Basic, or feature phones, of course remain cheaper than entry-level smartphones – but that gap is closing as fierce competition from those new, relatively obscure and mostly Chinese brands drives smartphone prices down. It follows then that 2018 will continue to see this flood of affordable smartphones onto a market that has, in large part, been quite content to use feature phones.

This will obviously have an impact on the regional economy too. The GSMA – a global trade body that represents the interests of the world’s mobile network operators – unpacked the implications in its report titled the Mobile Economy: sub-Saharan Africa 2017. It expects mobile technologies and services to contribute US$142 billion or 8.6% of the region’s GDP by 2020 (up from US$110 billion, or 7.7%, in 2016), as countries benefit from improvements in productivity and efficiency brought about by increased take-up of mobile services.

‘The mobile ecosystem also supported approximately 3.5 million jobs in sub-Saharan Africa in 2016,’ the report notes. ‘In addition to the mobile sector’s impact on the economy and labour market, it makes a substantial contribution to the funding of the public sector, with US$13 billion raised in 2016 in the form of taxation.’

Africa’s financial services sector is ripe for mobile innovation. Pan-African banking conglomerate Ecobank’s annual Fixed Income, Currency and Commodities Guidebook 2017 reports that ‘the proliferation of tech hubs across Africa (notably in South Africa, Kenya, Rwanda, Nigeria, Ghana and Côte d’Ivoire) will nurture the next wave of African start-ups and help connect them with investors’. It found that digital innovation in sub-Saharan Africa is being driven by ‘the explosion in mobile phone usage’, which enables consumers in the region to leapfrog existing business models and technologies.

‘African fintech firms are increasingly driving this innovation, deploying digital tools to build credit profiles for the previously “unbankable” – providing electricity to rural households that were previously off the grid, even using artificial intelligence to diagnose health problems remotely,’ states the report.

The GSMA, meanwhile, cites its Intelligence Global Mobile Engagement Index in predicting that the region ‘will transition to higher levels of mobile engagement in the coming years, underpinned by growing access to mobile data services and smart devices as well as a youthful population that almost entirely relies on mobile for digital services’.

As a result, mobile is now the preferred platform for creating, distributing and consuming digital content and services – including those that help address the region’s social challenges. ‘Opportunities in mobile-based innovation are attracting talent and investment to the tech start-up ecosystem in sub-Saharan Africa,’ notes the GSMA report.

‘Some 77 tech start-ups across the region raised just over US$366.8 million in funding in 2016, growth of 33% compared to the previous year. Mobile operators also play a central role in the tech start-up ecosystem through collaborative ventures with innovators and tech hubs, providing direct investments and access to key network APIs [application programming interfaces] and distribution channels.’

This trend of tech start-ups using mobile platforms to drive digital and social innovation will explode in the coming years. The GSMA found that by end-2016, sub-Saharan Africa had 420 million unique mobile subscribers (equivalent to a penetration rate of 43%), and it forecast that the region will have more than half a billion unique mobile subscribers by 2020, pushing the mobile service penetration rate to around half the population. ‘The region continues to grow faster than any other region. The CAGR of 6.1% over the five years to 2020 is around 50% higher than the global average.’

The same report predicts the total number of SIM connections in the region will rise from 731 million at end-2016 to nearly 1 billion by 2020. That date is now barely two years away. The mobile boom is already happening. Now it’s just a question of how radically it changes the regional landscape.

Ghana has opened its first farmer-owned cocoa fermentation centre. The facility, at... END_OF_DOCUMENT_TOKEN_TO_BE_REPLACED

An initiative supporting efforts to ensure the continuation of education amid the coronavirus... END_OF_DOCUMENT_TOKEN_TO_BE_REPLACED

The Namibian government is rolling out a NAD500 million COVID-19 loan scheme... END_OF_DOCUMENT_TOKEN_TO_BE_REPLACED