The United Nations Environment Programme’s Sustainable Buildings and Climate Initiative says the global building sector is responsible for 30% of carbon emissions each year. In response, environmental concerns have become integral to the design and construction of buildings around the world, and Africa is no exception.

‘A green building is one that is energy and resource efficient, not harmful to the environment and creates a space that is healthy and productive for the people that occupy it,’ says Manfred Braune, chief technical officer and executive director at the Green Building Council of South Africa (GBCSA). ‘This extends to the point where such a building actually improves the environment in the sense that it can even be restorative.’

According to Braune, some of the considerations of a green building include components such as energy, greenhouse-gas emissions, air pollution, water and sewerage management, storm-water collection, indoor environment quality, the materials used in the build, and how the building impacts on surrounding transport networks. He says land use and ecology are also key considerations, such as when the building was erected, and how the surrounding ecology was protected or perhaps enhanced through landscaping, green roofs and so on.

Alison Groves, regional director and sustainability consultant at WSP Africa, says the last six years have seen a significant uptake of green building. ‘Building green or building for sustainability and climate-change mitigation is increasingly becoming an industry standard in the South African market,’ she says. Interest in green building has also peaked across Africa in the past four years, where the GBCSA is helping to establish other similar councils. To date, green building councils have been established in Ghana, Kenya, Mauritius, Namibia, Rwanda, Tanzania and Zambia. As more rating tools are introduced, so the uptake for green buildings will continue to grow exponentially, says Groves.

The shift towards green building is also being driven by continuous and growing pressure on the built space to address inadequate energy resources, carbon-reduction targets and revised building energy-efficiency standards, says Groves. ‘Architects and consulting engineers are, therefore, constantly coming up with alternative and cost-efficient building designs to offset the impact of the building on its immediate environment.

‘The green-design elements may be vast and vary between buildings but will most certainly, at the very least, include things like the materials used in the building construction, energy efficiency – use of natural light and floor air flow that might lessen the use of artificial lighting and air-conditioning, for instance – as well as water consumption and waste to landfill considerations.’

Evan Lockhart-Barker, MD of Saint-Gobain Weber South Africa, says that while the concept of green building has evolved over the years, it hinges on resource efficiency. The building process and the materials used, along with the manufacturing process for materials, should be environmentally friendly and sustainable, using as little electricity and water as possible, and leaving minimal waste behind, he says. Insulating a building properly goes a long way to ensuring resource efficiency, he adds. 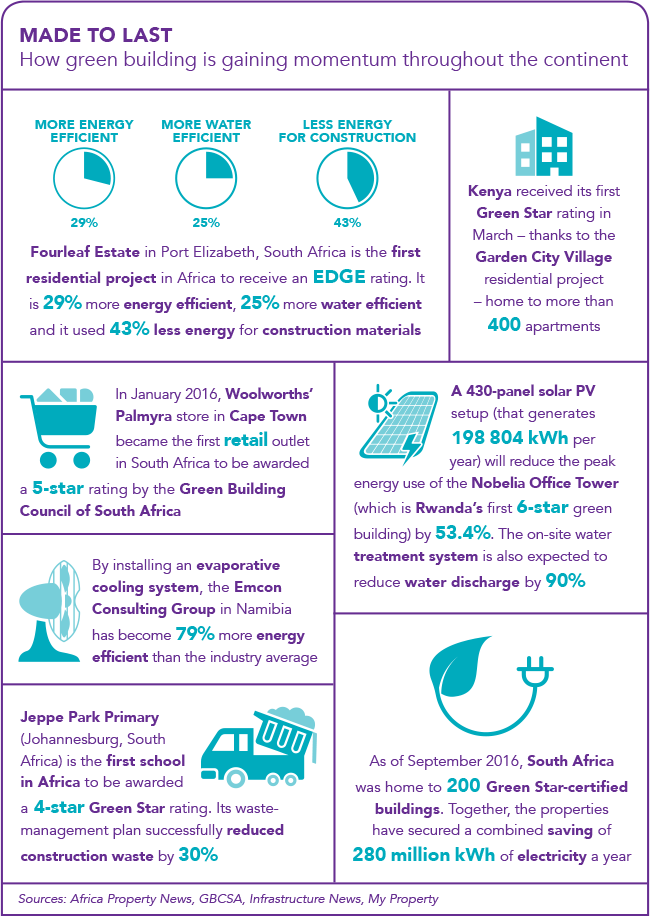 As far as new techniques and materials go, Braune says there are constantly improvements in this regard, as the technology changes all the time. Different types of buildings see different types of improvements, he says. Retail spaces, for example, see changes to their air-conditioning or refrigeration technologies, while office spaces employ clever lighting-control technologies, such as occupancy sensing or daylight harvesting. The external facades of buildings also present great opportunities for technological improvements, and Braune says a number of exciting innovations are happening with ‘clever facades’, such as different types of glass, double glazing, ventilated facades, and innovative shading design.

Braune believes that the internet of things will play an even greater role in green building in future, with every significant building component individually and independently linked to the internet and able to be controlled separately. Although this might take a while, he says, there are already signs of this in some buildings under construction – and it is making a real difference.

Until now, there has been a strong focus on new builds or refurbishments. However, Braune says this is only a small percentage of the market – perhaps 1%. ‘Besides the new buildings, we want to address those thousands of buildings already built,’ he says. ‘That’s where the big focus has to go to really make a significant impact on the environment.’ However, he adds, this would rely greatly on government to legislate green building because ‘if it’s not legislated, many of these existing buildings won’t change’. To address this, the GBCSA has created various green-building ratings tools targeting older buildings. Called Green Star SA – Existing Building Performance Tool, it gives a 12-month snapshot of a building’s energy and water consumption; the facilities-management policies and cleaning policies in use, and so on, enabling the building to be given a rating of one to six stars, valid for three years.

‘This allows property owners time to make some changes to increase one’s rating over a number of years,’ says Braune. He says the GBCSA has seen significant take-up from some of the bigger property companies, and that several of the banks have also started using it for their buildings. However, more companies could still take this up, he says.

Environmental considerations aside, there is a strong business case for environmentally friendly construction in that green buildings outperform other buildings financially. ‘The progressive uptake of green-building principles is not surprising as the industry’s shift to embrace sustainable practices has a proven and significant economic business case,’ says Groves.

While previously it was thought to be costlier to make the upfront capital investments to go green, volatility in both the cost and availability of power and water is influencing a mindset change in that savvier consumers are realising the benefits of being greener and, for example, offsetting as much of their energy consumption as possible, says Groves. ‘Added to this, in the long term, not only are these green-building design adoptions financially beneficial due to reduced energy consumption but the use of renewable and more sustainable energy resources also has the propensity to reduce the carbon emissions emitted by these buildings and provide increased resilience to uncertain service delivery,’ she says.

Green buildings are also future-proofed assets, says Braune, and better able to withstand infrastructural risks from municipalities, for example, increased water or energy tariffs. ‘The return on investment and asset value of the green building, because of all these aspects, will be higher. When selling the building, it could fetch a higher price than if it were non-green,’ he says.

Braune says South Africa is doing very well when measured against other countries. ‘The GBCSA started in 2007. The number of green buildings we have certified has just about doubled every year. We are now at 275 green building certifications, as of mid-June. It’s grown very rapidly. This shows there’s been incredible growth. It’s important to look at how far we’ve come and how far we still have to go.’

However, he says, when making the comparison to other countries it is important to put things into context. ‘We are so much smaller than America, for example, so we tend to try find countries of similar size or with a similar economy. We compare ourselves to Australia. Sure, our economy is not as strong or as large as theirs but it’s reasonably close. We also use a similar green-building rating tool of the same family – Green Star.’

Groves adds that, as market awareness about building for sustainability increases, so does exposure for the skills to develop and drive customisable green-building design solutions for different markets and climates in Africa. ‘From a sustainability point of view, this is a crucial aspect of every design endeavour – from technology specification to materials selection and labour practices,’ she says.

‘Opportunities to make a difference, fostering and supporting a green economy, exist within every project or business initiative. As such, it is conceivable that 10 to 15 years from now, the rest of the world may be looking to Africa for original solutions, experiences and expertise in the careful balancing act of optimising equally social equity, economic prosperity and environmental stewardship.’

Ghana has opened its first farmer-owned cocoa fermentation centre. The facility, at... END_OF_DOCUMENT_TOKEN_TO_BE_REPLACED

An initiative supporting efforts to ensure the continuation of education amid the coronavirus... END_OF_DOCUMENT_TOKEN_TO_BE_REPLACED

The Namibian government is rolling out a NAD500 million COVID-19 loan scheme... END_OF_DOCUMENT_TOKEN_TO_BE_REPLACED