For several billion people – indeed, more than half the world’s population – safe and sufficient sanitation is a foreign concept. Infrastructure such as flushing toilets and running water just does not exist. Cholera, typhoid and other diseases kill half a million children under the age of five every year, while the global cost of unsafe sanitation is at least US$220 billion (in the form of lost wages and productivity, and health costs). If not promptly and properly addressed, this problem will only be compounded, with rapid urbanisation, population growth and water scarcity contributing to its complexity. Off-grid sanitation systems and products have great potential to meet this urgent need.

In late 2018, the Bill and Melinda Gates Foundation joined governments, development banks, private-sector players and global innovators at the Reinvented Toilet expo in Beijing, China, where a commitment was made to accelerate the commercialisation and adoption of disruptive sanitation technologies over the next decade. Development-finance institutions, among them the Asian Development Bank, World Bank and AfDB, also announced their commitment to unlock US$2.5 billion in funds for citywide inclusive sanitation projects. 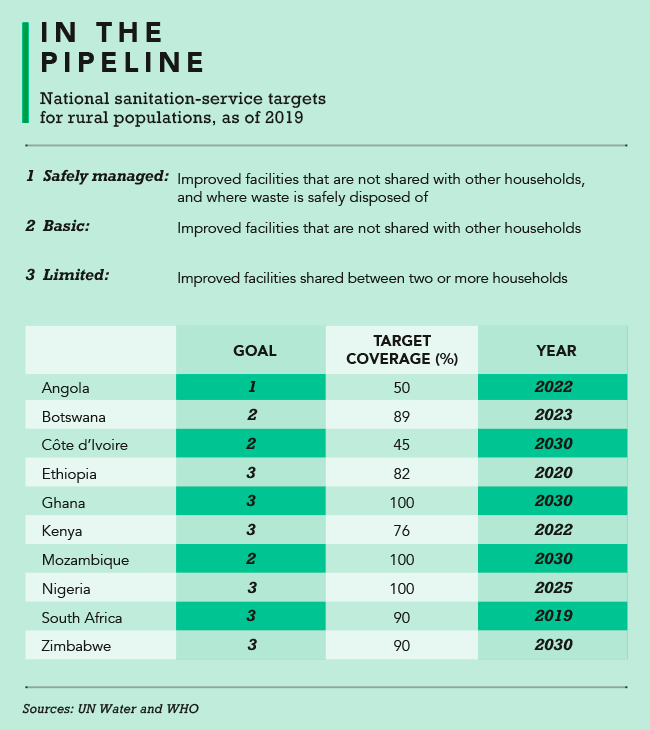 Talking at the opening session of the expo, Bill Gates said that ‘in 2009, I posed a question to a group of scientists and engineers: was it possible to leapfrog the long-accepted “gold standard” of sanitation: flush toilets, sewers and treatment plants? Could we come up with a more affordable approach that could kill pathogens and keep pace with the needs of fast-growing urban areas – without requiring sewer infrastructure or reliance on scarce water resources or continuous electricity to operate? I believe it is possible to achieve something like this in sanitation’.

The expo showcased, for the first time, radical, new, decentralised sanitation technologies and business-ready products. Gates introduced the concept of the ‘reinvented toilet’, a pathogen-killing toilet that is also self-contained – with a tiny treatment plant built into it. This diminutive in-built plant is the omni-processor, a self-powered technology that takes in human waste, kills dangerous pathogens, and converts the resulting materials into products that have potential commercial value – such as clean water, electricity and fertiliser.

The Bill and Melinda Gates Foundation has already invested more than US$200 million into early-stage research and development of this reinvented toilet and omni-processor, and, at the expo, announced that it will invest another US$200 million to support continued R&D and boost market development in regions where non-sewered sanitation products could have the most impact. Several toilet designs that debuted at the expo are now available commercially. They can be set up in areas devoid of traditional infrastructure, and deliver the same benefits as sewer-connected toilets – with other advantages, such as generating usable water and electricity as outputs.

‘Youth unemployment and lack of access to water and sanitation are two of the world’s most pressing challenges. We believe we can simultaneously address both issues through harnessing their interconnection,’ says Miles Bell, programme officer of Brussels-based international NGO, Young Water Solutions (YWS). ‘Young entrepreneurs can provide solutions for water and sanitation challenges, but this tremendous resource remains untapped due to the inaccessibility of financial support to young people and the lack of tailored training,’ he says. What these young visionaries most need is enabling conditions to effectively implement their solutions, along with training, coaching, supporting networks and seed funding, he adds.

One of YWS’ initiatives is the Young Water Fellowship (YWF), which provides young entrepreneurs from low- and middle-income countries with the training, mentorship and seed funding they need to pilot their social business initiatives to solve sanitation and hygiene challenges, and water pollution and scarcity issues, in their communities. Bell says that, while many approaches can be beneficial in solving water and sanitation challenges, YWS advocates supporting young entrepreneurs as it sees a huge amount of talent and willpower within African youth to provide essential – and currently insufficient – water and sanitation services for their communities. ‘External actors will do well to provide these young leaders with the tools they need to have a significant impact,’ he says.

In Kenya, at current rates, complete sanitation coverage will take 150 years. The East African country’s cities are seeing rapid growth – but infrastructure is not keeping pace. In the capital Nairobi, the country’s largest city, more than half the population lives in urban slums, with little to no access to basic services such as safe sanitation. Enter Sanergy, with its high-quality, low-cost Fresh Life Toilet, which separates solid and liquid waste. Using a full-value-chain approach, Sanergy operates a network of about 3 300 container-based sanitation units (including a handwashing station with soap, water and a bin), meeting the needs of more than 100 000 residents every day. A daily disposal service is included to empty the collected waste matter.

Another of Sanergy’s initiatives is Mtaa Fresh, a pit-latrine-emptying service launched in mid-2017, which works to provide cleaner and safer services both for the community and the latrine emptier. Better still, the collected waste is converted at a centralised facility into valuable end-products such as organic fertiliser and insect-based animal feed.

Mobile Alert Toilets, founded by Joyce Klu, a YWF alumna, is a social business that tackles the problem of overflowing pit latrines in Kenya’s urban informal settlements by retrofitting them with containers and sensors. These sensors monitor levels and send automated messages to arrange for emptying and safe disposal. While still in the early stages, the project is expected to benefit at least 200 000 people by 2023, with an ultimate goal of helping 3 million by 2030.

More than 110 million people in Nigeria do not have access to a toilet of their own, according to WaterAid, a charity working in the country. The Sustainable Total Sanitation Nigeria project, initiated by WaterAid, works to tackle sanitation challenges through its Water Easy Toilet. It also encourages what it calls community-led total sanitation, working with an entire community to identify the negative effects of poor sanitation, in particular the practice of open defecation, and collectively finding solutions.

In Tanzania, WaterAid works in the unplanned settlements of Dar es Salaam to improve liquid- and solid-waste management. With Tanzania urbanising rapidly, innovative solutions for waste management are key. WaterAid’s work in this area involves looking at technologies such as the ‘gulper’ for safe and hygienic pit-latrine emptying, and decentralised wastewater treatment systems, which it has already constructed in Kigamboni, in the district of Temeke.

During his address at the Beijing expo, Gates said it is not enough for companies to be interested in making and selling new products, but that it is also crucial for national and local governments to create an enabling environment with policies and regulations that encourage innovative sanitation service models, including with the private sector. Commenting on the scope for public-private partnerships in wastewater management and treatment, Kate Stubbs, marketing director at Interwaste, which provides integrated waste-management solutions, says it is imperative that both government and the private sector take wastewater treatment and re-use seriously, and that the private sector could be more innovative in delivering solutions.

‘As a resource-constrained economy that has communities living far below the bread line, there is no doubt that we need to find solutions that speak to the immediate communities,’ she says. ‘Wastewater treatment plays a pivotal role here and as such, it is up to us as the corporate community to find ways of offering such solutions in the most effective ways, as well as at the best possible cost and at the highest efficiency rates. It means that solutions need to be developed that are adaptable for the big corporate as well as the man on the street – where wastewater treatment becomes the norm and not a far-off vision.’

Off-grid sanitation solutions, in addition to solving a pressing global problem, also have enormous commercial potential. According to Gates, it is estimated that by 2030, the market potential for decentralised sanitation solutions will be a US$6 billion-per-year global business opportunity. During his closing remarks at the expo, he said that ‘today, we are on the cusp of a sanitation revolution. It’s no longer a question of if we can do it. It’s a question of how quickly this new category of off-grid solutions will scale. We don’t know exactly how long that will take, but we do know it can’t happen fast enough’.

Egypt is building what could be the world’s largest solar hybrid facility... END_OF_DOCUMENT_TOKEN_TO_BE_REPLACED

Targeted insurance is being developed to help protect Madagascar’s farmers against the... END_OF_DOCUMENT_TOKEN_TO_BE_REPLACED

Botswana is on track to become the first country in Africa to... END_OF_DOCUMENT_TOKEN_TO_BE_REPLACED