There is no doubt that ‘Africa is, and will be for the foreseeable future, a continent of opportunities with regards to development and trade’, according to Malcolm Hartwell, a director in the transport team at Norton Rose Fulbright. Among these opportunities is increased air trade, facilitated by new infrastructure developments.

Ivin George, DHL Global Forwarding’s vice-president of air freight and customs brokerage for the Middle East and Africa, says the continent is one of the company’s fastest-growing markets.

‘Having provided world-class freight services in Africa for the past few decades, we have seen the rapid economic growth and development in the region, and the opportunities which businesses here can tap into,’ he says. ‘Greater integration of African economies will remove barriers to trade and investment, and logistics as an enabler of trade will also grow to support the region’s logistics needs.’

George adds that ‘when the integration of the three African regional economic com­mu­nities – Comesa [Common Market for Eastern and Southern Africa], SADC and the EAC [East African Community] – under the Tripartite Free Trade Area [TFTA], does come into fruition in the near future, the region will see immense growth’.

He believes the outlook for air freight in Africa is very optimistic. ‘According to 2017 full-year data for global air freight by the International Air Transport Association [IATA], global freight demand registered the strongest growth since 2010,’ he says. ‘The region is well-positioned to tap into these opportunities, and we expect this positive trend to continue.’

Indeed, African carriers posted the fastest growth in year-on-year freight volumes during 2017 – the second time that African airlines have emerged tops in the global demand since 1990. According to an international air freight report by the IATA, in July 2017, African carriers posted the largest year-on-year increase in air freight demand of all regions, with freight volumes growing 33.7%. The report shows that demand, measured in freight ton kilometres, increased by 11.4% in July 2017, compared to the same period in 2016, while freight capacity, measured in available freight ton kilometres, grew by 3.7% year-on-year in July 2017.

The IATA says the robust rise in air cargo demand was boosted by strong growth on the trade lanes to and from Asia, which it said increased 80% year-on-year in June, and by 65% in the first half of 2017. The IATA further notes that the demand is consistent with an uptick in global trade, rising export orders and upbeat business confidence indicators. 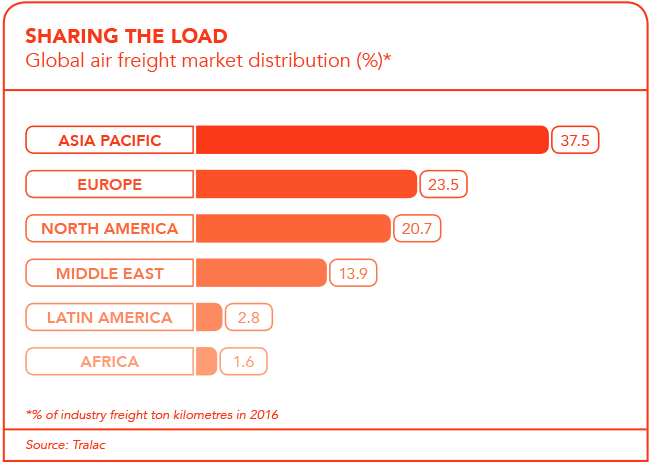 Air cargo is ‘flying high on the back of a stronger global economy’, comments Alexandre de Juniac, IATA director-general and CEO. ‘Demand is growing at a faster pace than at any time since the global financial crisis. That’s great news after many years of stagnation,’ he says. ‘And, even more impor­tantly, the industry is taking advantage of this momentum to accelerate much-needed process modernisation and improve the value it provides to its many customers.’

While several African countries have recognised the benefits of air freight to help develop local industries and their export markets, Hartwell says support from states and private financiers is required if significant hubs around which development can take place are to be developed. He adds that successful air hubs have developed on the back of several governments ‘recognising the need to liberalise air traffic, invest in infrastructure and encourage investment in support of industries around air freight hubs’.

Hartwell cites Dube TradePort in South Africa and Ethiopian Airlines’ success on the back of the 2025 Ethiopian Plan as examples of successful regional hubs. In fact, South Africa’s Dube TradePort has proven so successful that the Madagascan government is considering copying this model, as it delivers increased employment and revenue in exchange for the cost of infrastructure and preferential tariffs, he says.

Dube TradePort is one of Southern Africa’s largest manufacturing and logistics hubs. It has a dedicated air freight terminal that has been fully operational for eight years. The terminal can handle 100 000 tons of cargo annually, with the ability to grow this to 2 million tons by 2060. Dube Cargo Terminal is connected to more than 700 destinations around the world, with hubs including Addis Ababa, Doha, Dubai and Istanbul. With 0% cargo loss since opening, the cargo terminal is one of the most secure and technologically advanced in the world.

According to cargo terminal manager Ricardo Isaac, new infrastructure allows one to build from the perspective of how something is going to operate in the future. ‘Dube Cargo Terminal was built for efficiency and security,’ he says. ‘We put the infrastructure in place some time back and we are now reaping reward in terms of the business we generate.’

Asked whether he thinks Africa would benefit from more regional hubs, Isaac answers in the affirmative. ‘For a long time, we’ve had certain big hubs within Africa, which is good, but you need secondary hubs as well,’ he says. ‘We need to connect Africa with Africa – it’s about reaching the market.’

Aviation infrastructure, says Isaac, is ‘far quicker and cheaper by context’ to access the markets, versus road or sea freight. ‘It’s a more cost-effective way of opening up markets because it doesn’t just talk to cargo, it talks to people that need to move cargo too.’

With regard to what is currently lacking in the air freight industry, Isaac says infrastruc­ture. However, he acknowledges that invest­ment is taking place across the continent, as governments begin to realise that infrastructure will benefit trade. ‘We are certainly seeing this with Dube TradePort. Other regions are looking at the same thing – not necessarily at us but at the same concept. There’s a realisation that infrastructure is what will drive trade and the economy.’

According to Isaac, the ease of doing business across Africa needs urgent attention. Whether as an importer or an exporter, by air or by sea, obtaining the appropriate stamps and authorisation for a shipment is an arduous process, he says – one that often entails going to several different places, sometimes kilo­metres apart, to complete the relevant paperwork.

Isaac says Dube TradePort has made it a priority to offer a ‘one-stop shop’ in this regard – encompassing customs, border control and other regulatory checkpoints for the benefit of its customers. ‘Everything is integrated into one area of operations. It’s all under one roof,’ he says, adding: ‘This is what we need more of. As new airports and terminals are being developed, the move should be towards consolidating all of this into one facility.’

In mid-2017, Africa’s largest cargo operator, Ethiopian Airlines, opened its new, state-of-the-art Cargo Terminal-II, which covers a total area of 150 000 m2. This, together with the existing Terminal-I, allows a total tonnage capacity of 1 million per annum.

On completion of the second phase, which will add 600 000 tons in annual uplift capacity, Ethiopian Cargo and Logistics Services will have one of the world’s largest cargo terminals – a capability equivalent to cargo terminals at Schiphol (Amsterdam), Changi (Singapore) and Hong Kong.

Blaise Diagne – Senegal’s new international airport – opened in early December 2017 and is co-funded by the AfDB. With a 42 000 m2 passenger terminal and 12 800 m2 cargo terminal building that’s designed to handle 50 000 tons of cargo and 80 000 aircraft movements annually, the airport resolves what had been an ongoing terminal capacity challenge. The AfDB said at the time that it offers a ‘long-term solution to intra-African economic activity and resolves a perennial problem of low levels of aviation connectivity in West and Central Africa’.

In early 2017, for the third consecutive year, South Africa’s OR Tambo International was named African Airport of the Year at the Air Cargo Africa conference. The title was in recognition of the airport’s intention to boost cargo traffic and enhance its status as the leading air freight hub in Africa.

Airports Company South Africa (Acsa) is increasing its efforts to support the growth of air cargo traffic, with initiatives to ease congestion and expand warehouse space, along with infrastructure developments to further increase capacity. In the short term, Acsa will focus on reconfiguring and upgra­ding the access and frontage roads around the cargo buildings at OR Tambo, while the medium- to long-term plans include the building of a midfield cargo terminal, which align with a master development plan for the entire airport precinct.

Hartwell maintains that with Agenda 2063 in place (Agenda 2063 being a strategic framework of the AU for the socio-economic transformation of the continent over the coming 50 years), and being driven by certain organisations and countries, logistics and air freight companies are watching developments across the continent closely. ‘They recognise the potential of Africa and simply need issues such as regulation, infrastructure and taxation to be resolved before they will invest heavily,’ he says.

‘The major global logistics industries that recognise clients want door-to-door services are investing in those countries in Africa that are at the forefront of lowering the cost of transport and increasing investment in air freight and other logistics infrastructure.’

More than 3 000 women leaders of farming co-operatives in Rwanda are... END_OF_DOCUMENT_TOKEN_TO_BE_REPLACED

A 13 km high-voltage power line being built in Zimbabwe is the... END_OF_DOCUMENT_TOKEN_TO_BE_REPLACED

Small and medium-sized businesses in Ghana that are struggling to adapt to... END_OF_DOCUMENT_TOKEN_TO_BE_REPLACED