‘I’ve read somewhere that roads are the arteries through which the economy pulses,’ says Riaan Cronje, business development director: managed solutions at Imperial Logistics. ‘Infrastructure investment leads to increased access to transportation, which leads to reduced transportation costs, which links production – raw material to finished products – to consumers or markets, which leads to an increase in trade, economic growth and sustainability.’

Road logistics play a key role in growing economies, adds Cronje. ‘Due to a lack of or poor service of rail and rail infrastructure, road transportation can get products to more areas and more consumers faster,’ he says. ‘At the end of the day it’s all about faster delivery of products to the consumer.’

According to the World Bank, the cost of transporting goods in Africa is the highest in the world. ‘This places a significant burden on the development of many African economies,’ says Jean-Pierre Labuschagne, Deloitte Africa lead of infrastructure and capital projects. He says that in many countries on the continent, rail networks have declined, forcing a shift from rail to road as the only way to move goods effectively and quickly.

‘The cost to governments from this shift is often extreme due to the heavy toll that moving goods by road places on the road network,’ says Labuschagne. ‘The increased cost of road maintenance is often not captured or reflected in budgets for road repair, which in many regions leads to an increase in the time taken on the road.’ He cites Kenya as an example. ‘The main transport route from the coast inland and to neighbouring countries is significant. The 400 km journey from the port of Mombasa to Nairobi can take over 12 hours.’

Just how bad are Africa’s roads, then? ‘If you look at Nigeria, Kenya, Ghana and Mozambique, much of those countries’ infrastructure is shot,’ says Cronje. ‘That said, Abuja does have some great roads, likewise with Nairobi. What you can see is the decay of infrastructure that was produced several decades ago, with maintenance desperately needed.’

Cronje notes that outside of South Africa, Namibia, Botswana, Lesotho and Swaziland have the best road infrastructure in Southern Africa, with Zimbabwe’s being relatively good. Zambia, Mozambique, Malawi, the DRC and Angola, however, all suffer from poor infrastructure, similarly with West Africa’s Nigeria, Ghana, Benin and Togo. He says there are exceptions such as Abuja, where the main city areas and some corridors have ‘stretches of excellent road infrastructure’. In East Africa, Kenya is fairly good in certain areas but in general has poor infrastructure, he adds.

With many of the continent’s roads in great need of attention and investment, the key question is whether something is being done about this. Deloitte’s recent Africa Construction Trends report – which tracks projects in construction with a value of between US$50 million and US$500 million – notes that transport receives the lion’s share of capital investment. According to the report, of the 303 construction projects tracked, transport has a share of 36%, energy and power (19.1%), and shipping and ports (7.9%). 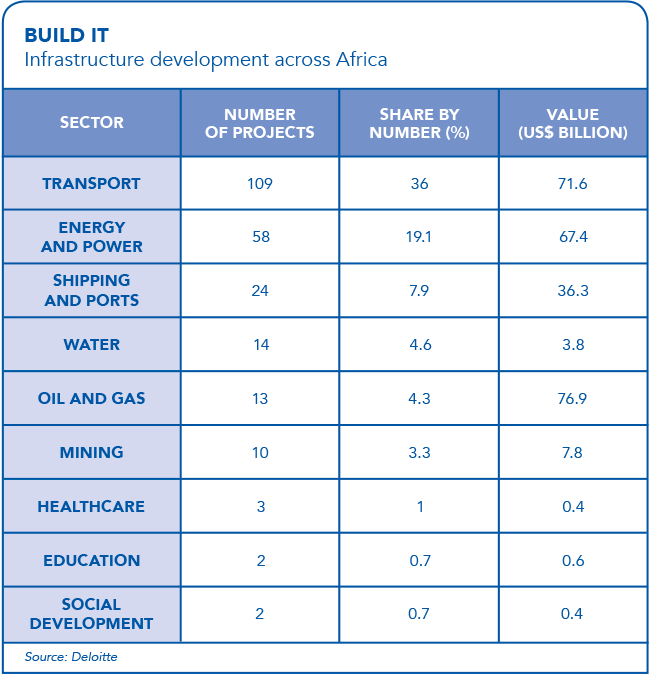 Commenting on the report’s finding, Labuschagne says: ‘The order changes slightly from region to region, but investments in transport are still significant. This shows that many African governments see the value of increased transport linkages, linking not just their country with the coast but creating intra-regional links too, which are just as important.’

In March last year, the AfDB approved US$253 million in loans to the governments of Kenya and Uganda for the upgrading of the 118 km-long Kapchorwa-Kitale road that connects the two countries, as well as the construction of the 32 km Eldoret bypass in Kenya and a one-stop border post in Uganda’s Suam, to facilitate trade between the nations.

Once complete in 2021, the road, which connects Kapchorwa in Uganda to Kitale in Kenya, will provide direct access for citizens, farmers and traders. In addition, the bypass will reduce traffic congestion in the town by avoiding crossing of the city centre.

Road infrastructure aside, companies are making whatever fleet and systems improve-ments they can to improve their logistics performance. As such, the Barloworld Logistics transport division has, over time, been introducing smart trucks into its fleet. These vehicles have innovative features that boost overall performance, while ensuring that safety and efficiency standards are continually improved.

These smart trucks – which are also more economical to own and operate – are designed using sophisticated computer software that performs simulations to test and improve the vehicles’ response to a variety of situations and emergencies that may occur on the road. According to Barloworld Logistics, the current fleet of 60 smart trucks operating in various sectors of the transport industry has (per ton of payload transported) generated on average 31% less road damage and achieved fuel savings as high as 25%.

The company notes that by using these vehicles, from September 2012 to June 2017 it has also attained a 12 500 trip reduction, saved 2 million litres of fuel, and reduced carbon dioxide emissions by 5 700 tons.

Imperial Logistics recently implemented the continent’s first-ever automated-briefing programme for drivers. The project consists of a comprehensive system that stores every driver’s personal and professional information – from driving certificates, licences and training updates, to driver ratings and incident reports, as well as chronic medication details.

Self-briefing ‘kiosks’, much like the self-service check-in counters at airports, have been installed at Imperial sites. Drivers access the self-briefing portal through these. Where drivers would previously interface with a controller, they now clock into the portal using biometrics (fingerprints) and brief themselves on the system.

Developed by Imperial, the system (which is also a first for the transport industry) will not allow a driver to clock in unless they have had the required 12 hours of rest. Similarly, if they are on chronic medication, the system will ask them questions to ensure that they have taken their medication. The same system and kiosks are being used for post-trip driver debriefings by Imperial, with great success.

Cronje believes Africa’s logistics sector presents a major growth opportunity. ‘The reality is that the logistics work because the economies are working, but there are a lot of improvement opportunities.’ An improved logistics industry has numerous positive knock-on effects, including creating a more sophisticated logistics and supply chain environment; skills development; job creation; and chances for investment, he adds.

PwC, in a recent report titled Africa Gearing Up, argues that whether moving resources off the continent or bringing goods and services into its burgeoning economies, Africa’s future growth and development will depend on the quality of its infrastructure and the efficiency of its transport networks.

‘As Africa has risen to prominence as an investment destination over the past few years, so the role of transportation and logistics has taken on greater significance,’ the report notes.

The research found that intra-Africa trade tends to be low in comparison to global counterparts, largely due to poor infrastructure and because most economies continue to be resource based. Currently, around just 11% of the continent’s trade is with other African trading partners. The firm attributes this to infrastructure barriers to trade and says that trade agreements should be an imperative.

According to Alessandra Valenza, CEO of VS Cargo, it is important that there is a balanced response from governments and the private sector in developing the sector. ‘While countries such as Zambia and the DRC have seen vast improvements in infrastructure there are still many contributing factors that increase costs and delays, such as police roadblocks and customs posts, erratic electricity supply and communications problems. Access to cheaper funding from lenders is important as this will reduce the overall cost of logistics and have other benefits such as improving transport workers’ skills,’ she says.

There’s no doubt that logistics has a vital role to play in the continent’s growth by helping build infrastructure, enabling trade and aiding the creation of jobs.

Ghana has opened its first farmer-owned cocoa fermentation centre. The facility, at... END_OF_DOCUMENT_TOKEN_TO_BE_REPLACED

An initiative supporting efforts to ensure the continuation of education amid the coronavirus... END_OF_DOCUMENT_TOKEN_TO_BE_REPLACED

The Namibian government is rolling out a NAD500 million COVID-19 loan scheme... END_OF_DOCUMENT_TOKEN_TO_BE_REPLACED