It depends who you speak to. Ask Senegalese-American pop star Akon, and he’ll roll out the blueprints for Akon City, a US$6 billion smart city 120 km south of Dakar, not far from Senegal’s new US$575 million international airport. Akon City promises a Wakanda-like metropolis, populated with gleaming skyscrapers and palm trees and serving as a regional tech and commerce hub. There’ll be an ocean-front boardwalk with restaurants, hotels and residential blocks; office buildings, parks, schools, a hospital and a stadium – with the 300m-high Akon Tower at the centre of it all. Residents will deal in a digital cryptocurrency named, perhaps inevitably, Akoin.

The eponymous rapper sees Akon City as becoming a key destination. ‘If you’re coming from America or Europe or elsewhere in the diaspora and you feel that you want to visit Africa, we want Senegal to be your first stop,’ he told the Guardian.

Just Ask South African President Cyril Ramaphosa, and he’ll point you in the direction of Lanseria. Here, 50 km north-west of Johannesburg, Ramaphosa hopes to establish what he describes as a ‘truly post-apartheid city’ that will change the social and economic apartheid spatial architecture.

‘A new smart city is taking shape in Lanseria, which 350 000 to 500 000 people will call home within the next decade,’ he said during his February 2020 State of the Nation address. ‘Working with development-finance institutions we have put together an innovative process that will fund the bulk sewerage, electricity, water, digital infrastructure and roads that will be the foundation of the new city. It will not only be smart and 5G-ready but will be a leading benchmark for green infrastructure, both continentally and internationally.’

It was hard not to get swept away in the vision of South Africa’s own booming Wakanda. Yet the state of Africa’s smart cities is, at this point, a tale of those two cities: Akon’s Dakar vanity project and Ramaphosa’s grand vision of the future. It’s very easy to find sceptics for both.

Christopher Marcinkoski, associate professor of landscape architecture and urban design at the University of Pennsylvania in the US, was brutally honest in his assessment of Akon City. ‘I suspect this project, like the others I have looked at, is very much a real-estate play,’ he told the university’s Penn Today news hub. ‘Something will ultimately be built, but the nature of what is constructed will likely bear little relationship to what is being shown in the press. There’s a disconnect between the propaganda for the project and the reality of execution.’

Acknowledging that cities across the continent are ‘in need of urgent upgrades to housing and infrastructure’, Marcinkoski adds that ‘unfortunately, what I think you’re seeing in response are numerous proposals for new towns and settlements that are located outside existing urban structures. These are projects proposed for ex-urban or greenfield sites as opposed to proposals to transform existing fabric. And the reason for this is simply that it is easier, and cheaper, to build new than retrofit and modify. Such an approach is far more environmentally destructive and less likely to serve populations in need’.

The reception for Ramaphosa’s vision has been far kinder, but critics and cynics remain. ‘When you put it all together, the smart-city model makes perfect sense for South Africa. It offers a fresh start and a means to finally rid the country of the shackles of apartheid spatial planning,’ Bryan Groenendaal, founder of Green Building Africa, writes in one of the company’s opinion pieces. But while he sees the Lanseria smart city as ‘a beacon of hope’ and ‘a symbol of nationalism and prosperity’, he thinks it’s being built in the wrong place.

‘For me, the most obvious place to build it is in coal country – Mpumalanga,’ he writes. ‘As South Africa grapples with transitioning out of coal-fired energy to renewable, a smart city in Mpumalanga will address the challenge of job and skills transfer from the coal industry to additional sectors other than renewables.’

Would it, though? After all, the Swiss-based Institute for Management Development’s Smart City Index 2020 features urban centres from across the world in its Top 10 – including Singapore, Helsinki, Auckland, Oslo, Amsterdam, Taipei City and New York – yet the highest-ranking African city was Cape Town, in 103rd place. Rabat, Cairo, Abuja, Nairobi and Lagos filled places 105 to 109… The bottom five positions on the list. And while there are currently 10 smart-city zones in various stages of development across Africa, you’d need the powers of a comic-book superhero to find one that’s actually delivering on its promise.

Nigeria’s Eko Atlantic City offered the vision of a bustling economic hub occupied by residents and businesses at its inauguration in 2013. By 2020, only two residential towers have been completed, with the projects plagued by allegations of corruption and criticism over a lack of affordable housing.

Kenya’s Konza Technopolis has similarly struggled. Despite setting a goal at its 2008 launch of having 20 000 residents by 2020, by 2018 no buildings had been completed and, in 2020, reports surfaced that the developer had moved on to projects elsewhere in Africa.

Meanwhile, work on Rwanda’s Vision City 2020 began in 2013, and was completed by 2018. A year later, it was still empty. As David Himbara, professor of international development at Toronto’s Centennial College, writes in Medium, ‘the original prices of the housing units that ranged from US$179 000 to US$560 000 were sharply reduced but to no avail. General Kagame forgot one thing. In a country where most people earn less than US$1.90 a day, few can afford houses in his now ghost town. The biggest losers in this fiasco are Rwandan workers. The money that built Kagame’s ghost town came from the Rwandan workers’ pension fund – no less than US$150 million’.

Is the dream of African smart cities doomed to be just that: a dream? Not necessarily.

Sahem Azzam, VP of Middle East and Africa at Orange Business Services, believes that smart cities in the region are ‘holistic ventures’, and that, to avoid wasting time and money, the entire ecosystem – people, organisations and businesses, policies, laws and processes – must work together from day one. 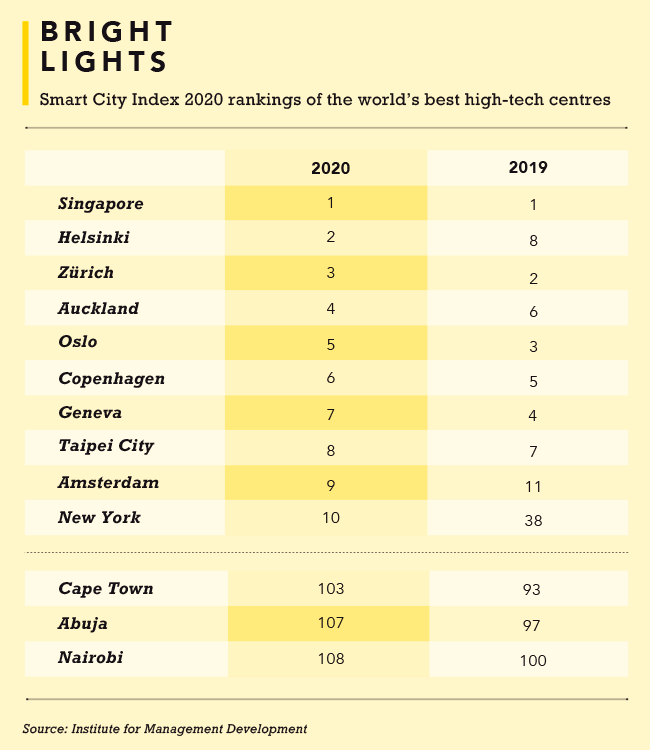 ‘One of the key priorities for a smart city is the effective and efficient management of this complex ecosystem,’ he says. ‘You need to ensure that your ecosystem dynamic matches your initial business case set-up. It can provide city managers with a single point of contact to drive adjustments and changes where needed. City leaders need to rely on each ecosystem member’s expertise in their respective industry: utilities, waste and recycling, telecommunications, automotive, travel and transportation, healthcare, engineering and construction. All these elements combine to create the whole.’

Astrid Haas, policy director at the International Growth Centre, agrees. Writing for the Conversation recently, she points out that successfully designing new cities from scratch is not easy. ‘Cities are complex systems,’ she says. ‘They require the necessary infrastructure to function. Silicon Valley has been successful as the infrastructure and regulatory environment has meant firms have clustered and learnt from each other, spurring innovation. But none of this matters without people being willing to live there. And what attracts people into cities are opportunities for social interaction and the socio-economic networks.’

Haas believes that building new smart cities in the hope that people will follow, may be ‘a higher-risk gamble that most African governments cannot afford’. A surer bet, she argues, is to study where people are already moving and where future urbanisation is likely to occur. ‘Laying the foundations for this urbanisation to happen in an orderly and well-managed fashion, such as delineating basic road systems and investing in basic infrastructure before settlement takes place, as was done in Abuja, will go a long way to harness the potential of Africa’s urbanisation,’ she says.

Africans are migrating to cities. The UN predicts that the share of the continent’s urban residents will nearly double from 11.3% 2010 to 20.2% by 2050. The cities they’ll be moving to may not quite be Wakanda, but – with the appropriate policies and approaches – they may well be the stuff of African dreams.

African women working in the investment arena have received a US$60 million... END_OF_DOCUMENT_TOKEN_TO_BE_REPLACED

Zimbabwe is growing its status as a battery-minerals hub. The country has... END_OF_DOCUMENT_TOKEN_TO_BE_REPLACED