Construction of the pipeline for South Africa’s first commercial helium plant is officially under way.

The 52 km pipeline forms part of plans by helium and liquefied natural gas producer (LNG) Renergen to take its flagship Virginia Gas Project into production by 2021, as reported by Engineering News.

Phase 1 of the project – which spans 187 000 ha of gas fields across Welkom, Virginia and Theunissen in the Free State province – aims to produce around 350 kg of helium and 2 700 gigjoules of LNG per day. Phase two, which is scheduled for 2022/3, will ramp up production to between 1.2 and 5 tons of helium per day. The pipeline will connect all 12 of the company’s wells to one central location.

Helium is a relatively rare commodity and, once in production, South Africa will become the eighth country worldwide to become an exporter of the gas. 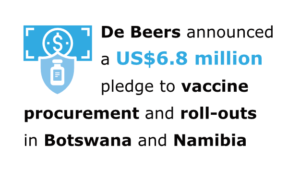 In South Africa, an early-stage trial for a COVID-19 vaccine candidate is... END_OF_DOCUMENT_TOKEN_TO_BE_REPLACED

Ethiopia and Djibouti have received a multimillion-dollar injection in support of their... END_OF_DOCUMENT_TOKEN_TO_BE_REPLACED

A US$14.5 million loan has been secured for the construction of a... END_OF_DOCUMENT_TOKEN_TO_BE_REPLACED