Inaugurated in 2018 and located in the Northern Cape’s Karoo, the 64 satellite dish-telescope is already the most sensitive of its kind in the world. The MeerKAT is the precursor to the Square Kilometre Array (SKA), an international project to build the world’s largest telescope that is ‘tens of times more sensitive and hundreds of times faster at mapping the sky than today’s best radio astronomy facilities’, according to the official website. It adds the SKA isn’t a single telescope ‘but a collection of various types of antennas, called an array, to be spread over long distances’.

The project is to be hosted in South Africa’s Karoo region and Western Australia’s Murchison Shire, and SKA members include public and private organisations from 20 countries.

Funding for the 20 MeerKAT dishes will be jointly shared between the South African Radio Astronomy Observatory and Germany’s Max Planck Institute for Radio Astronomy, both of which are members of the SKA project. 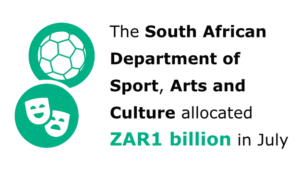 Lesotho is set to benefit from an initiative that addresses maternal mortality... END_OF_DOCUMENT_TOKEN_TO_BE_REPLACED

Medical-grade PPE worth ZAR15.5 million has been earmarked for 24 South African... END_OF_DOCUMENT_TOKEN_TO_BE_REPLACED

In Morocco, construction has begun on the 150 MW Taza wind farm... END_OF_DOCUMENT_TOKEN_TO_BE_REPLACED