The current drought that has resulted in water shortages taking on critical proportions in two provinces of South Africa – the Western and Eastern Cape – has drawn attention to the legal use of the resource, particularly the division between industrial, agricultural and private application. In parts of those provinces, local governments have taken incisive steps to limit the use of water, and for the first time, there have been concerns that Cape Town could become the first major city in the world to run out of water.

So, what is the present state of the legislation that governs water usage in the various economic sectors in the country, and how well does it stand up to scrutiny to ensure enough water is available for the different needs of the economy and population?

Some experts argue that the country’s existing water laws need to be strengthened while others say the main problem is poor implementation by the authorities.

‘Only 8% of our land provides us with 50% of our surface runoff, or water that feeds into our rivers, streams and wetlands,’ he says. ‘Twenty-two strategic water source areas support about 60% of our population and 67% of our national economic activity.’

The City of Cape Town, which is taking severe strain in terms of sufficient water, receives 98% of its water from the Boland mountains and Table Mountain water source areas.

‘Both the departments of Water and Sanitation [DWS] and of Environmental Affairs have shown willingness to take steps to secure our water resource areas. A potential way of achieving this would be an amendment to the National Water Act, with a specific provision that empowers the minister to identify geographical areas in which water use is restricted, either by way of general authorisation or in issuing water-use licences,’ he says. ‘A further mechanism would be for the Minister of Environmental Affairs to declare specific water source areas in terms of provisions of NEMA.’

Rémy Kinna, honorary research associate at the University of Cape Town’s Institute for Marine and Environmental Law, calls for stronger institutional powers for bodies that govern and plan the use of transboundary water in the SADC region. There are major gaps in enforcement of rules and regulations at all scales, he says. 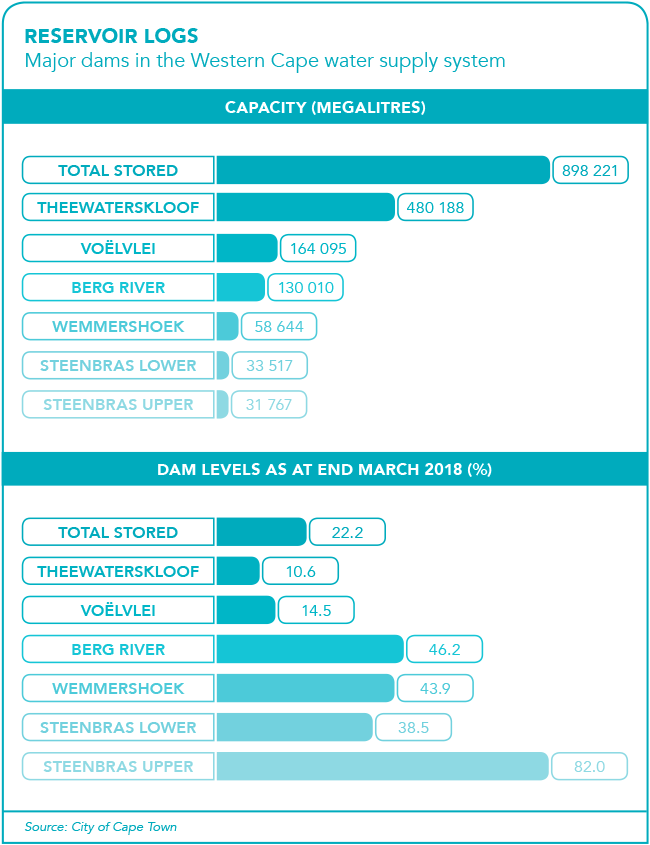 ‘The crisis facing South Africa is not due to water laws comparing poorly to those of other drought-prone countries, but rather a lack of effective administrative oversight and implementation of long-term water-management strategies.

‘South Africa shares a number of major river basins with neighbouring countries that are crucial to its national water security, most notably the Orange-Senqu river; the Limpopo river basin; and the Incomati and Maputo rivers. All these transboundary river basins have some kind of multilateral water-management agreement and directly mandated institutional governance framework,’ says Kinna.

‘Each international basin agreement and institution mainly concerns national level data-collection targets, systems for transboundary information sharing and technical co-operation, and overall inter-governmental co-ordination in measuring basin hydrological flows and planning major infrastructure projects.’ He adds that specific water usage and quantity allocation regimes under each of these agreements must be elaborated for stronger integrated water resources management in the shared rivers. This must then be consistently implemented by all states within their own sovereign borders.

‘A further legal imperative is to integrate management of transboundary aquifers into shared river agreements to create a comprehensive governance framework for basin hydrological systems.’

According to Tina Costas, director at Norton Rose Fulbright, 2017 DWS data shows that, per capita, South Africa used almost 60% more water than the global average. This high water use is directly associated with the fact that the resource is relatively inexpensive and therefore considered by many as unlimited.

She goes on to explain that since 2015, the DWS has been working on plans to introduce a law known as the Water and Sanitation Bill, which will consolidate and amend the NWA and Water Services Act – South Africa’s two primary water laws – into a single act. However, by November 2017, the bill had not yet been finalised for tabling in Parliament; nor had it been made available for public comment.

‘The mere existence of the bill is in some respects proof that the DWS has concerns regarding the ability of these laws to adequately protect water resources and access to water,’ says Costas, adding that current problems include a lack of co-operative planning for the provision of bulk water services across South Africa.

‘The Cape Town crisis has led to questions about the adequacy of the mechanisms available for bulk water supply to municipalities. South Africa has a narrow range of water supply sources, primarily being surface and limited ground water use.

‘Broadening the supply mix to include non-traditional water resources such as desalination, water re-use and rainwater harvesting require urgent attention.

‘For example, as water prices increase to reflect the real cost of water, it is likely that rainwater harvesting and other low-cost options to supplement municipal water supply will become attractive to residential and commercial water users.’

Terry Winstanley, director and national head of the environmental law practice at Cliffe Dekker Hofmeyr (CDH), explains that the NWA repealed the old Water Act No 54 of 1956, and completely changed the way water use is regulated. ‘The old Water Act made a distinction between public and private water, and surface and groundwater – but those distinctions are largely done away with under the NWA,’ she says.

‘Further, while water-use rights were given to those closest to rivers under the Water Act – so-called “riparian” rights – that arrangement has largely been done away with now under the NWA, which provides that no one owns water, but that water-use rights may be allocated by the DWS by way of water-use licences granted for specific water uses, and through general authorisations issued for small-scale water users on which any water user may rely, provided that the conditions of those authorisations are met.’

Winstanley argues a large portion of water in the Western Cape is used in the agricultural sector, which is required by current DWS water restrictions to use 60% less water than it did historically, based on an ave­rage use over the past five years. ‘This presents significant chal­­­lenges for farmers who have al­­ready planted crops that require uniform quan­­tities of water for a successful harvest. Because agricultural water users are spread out across large areas, the use of water in that sec­tor, particularly from boreholes, is hard to police.’

Then, for city dwellers, a water by-law of the City of Cape Town allows for the implementation of water restrictions on the use of potable water supplied by the city, and the installation of water-restriction devices where those restrictions are not complied with (at the cost of the delinquent water user).

Under that by-law, the city imposed level 6B water restrictions, permitting the daily use of 50l of water per person, per household. Where a household cannot meet that requirement, it is possible to apply for an exemption, according to Winstanley.

The city is also in the process of implementing water-augmentation schemes provided from groundwater and the desalination of sea water. Drought conditions in the Western Cape have produced both good and bad outcomes. On the positive side, upper-income water users have significantly and almost uniformly, drastically reduced their water use so that it is in line with lower income or unemployed households, which have always used much less water.

On the down side, drought has spawned lots of unlawful use, including people who pump water from boreholes in excess of the permitted quantities, and truck it by tanker for use (for instance) in swimming pools in Cape Town. This often has adverse impacts on borehole water users downstream.

In addition, scientists have raised concerns about the impact of lowering groundwater levels on biodiversity in the area. They also voice disquiet about the impact of highly concentrated and sometimes chemically polluted brine derived from desalination of sea water and its discharge back into the ocean, says Winstanley.

Costas argues that there is insufficient data on the feasibility of the use of groundwater resources, especially in surface-water constrained areas.

‘What is certain is that all South Africans need to acknowledge that while water may be a renewable resource, the presence of usable water is limited, and it’s continually being diminished by pollution of water resources and the impacts of climate change,’ she says.

‘Therefore, all businesses that have a high water consumption need to consider, adopt and implement strategies to decrease water use, prevent pollution of natural water resources and investigate measures to reuse and recycle water.’

Blockchain technology is proving to be a lifeline for residents of a... END_OF_DOCUMENT_TOKEN_TO_BE_REPLACED

Ghana is poised to become the West African regional hub for cheaper,... END_OF_DOCUMENT_TOKEN_TO_BE_REPLACED

Thousands of Ethiopians are set to benefit from a dam and a... END_OF_DOCUMENT_TOKEN_TO_BE_REPLACED