While it certainly has large areas of lush greenery, Southern Africa unfortunately also has large regions that are very dry. Add in the fact that rain has been pretty scarce in recent years, topped off with a pandemic, and you have a water-accessibility problem that is severely compounded, making water, sanitation and hygiene (WASH) infinitely more challenging. It’s well known that South Africa is a water-scarce country – ranking 30th driest in the world, according to its Department of Water and Sanitation (DWS). The government’s 2018 National Water and Sanitation Master Plan identified a water-supply deficit of 17% by 2030, also acknowledging that just 64% of households had safe, reliable access to water.

While South Africa has made substantial progress in the provision of safe drinking water and sanitation services over the past 25 years, it is not yet enough. Kevin Winter, of the University of Cape Town’s (UCT) Future Water Institute in the department of environmental and geographical science, said earlier this year that South Africa is unlikely to achieve the UN Sustainable Development Goal (SDG) for water by 2030.

‘The final report to the UN is more likely to take the form of a rain check, claiming that the pandemic has interrupted the agenda for addressing the SDGs. South Africa will not be the only country making such a plea. However, access to and availability of water is crucial for the country to press on with its developmental agenda by using the SDGs to complement the National Development Plan and to use the opportunity as an international benchmark,’ Winter writes in a press release issued by the university. ‘What is required is a substantial investment in new water-supply infrastructure; a concerted effort to reduce water loss – currently an average of 37%; and an investment in innovations that aim to reduce, recycle and reuse water without harming the receiving waters, including the oceans.’

First prize, according to Chris Braybrooke, (and one with the quickest impact) would be addressing non-revenue water losses, which wouldn’t require additional infrastructure, only maintenance programmes. Braybrooke is the GM of marketing (South Africa) at Veolia Services Southern Africa, a company that is involved in numerous municipal projects related to bulk water supply as well as waste-water treatment plants. 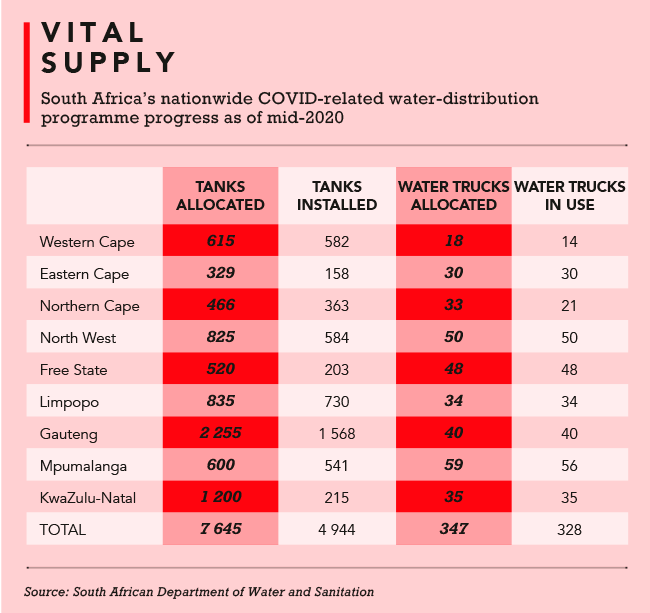 ‘Water re-use is vital,’ he adds, citing Durban Water Recycling in KwaZulu-Natal, which supplies recycled wastewater to industrial and domestic consumers, as an example. ‘No investment [was] required by eThekwini [municipality] to free up to 47 million litres of water for nearly 220 000 households,’ he says.

Statistics South Africa, reporting on the results of the 2019 General Household survey, notes that the percentage of households with access to an improved source of water was 88.2%. The changes from 2002 figures were more notable in the Eastern Cape (up 17.8%) and KwaZulu-Natal (up 10%). Drilling deeper into the results reveals that 44.9% of households had access to piped water in their dwellings in 2019; 28.5% accessed water on-site; 12.2% relied on communal taps, and 2.5% relied on neighbours’ taps. However, 3.1% of households were still collecting water from rivers, streams, dams, wells and springs.

Human Settlements, Water and Sanitation Minister Lindiwe Sisulu says the COVID-19 pandemic has highlighted the challenges of water and sanitation access in South Africa. Speaking earlier this year, she said the launch of the National Water and Sanitation Master Plan is an important part of ensuring that everyone in the country has access to water. ‘We regard our master plan as a transformation charter for the water and sanitation sector,’ she said.

‘Large sections of our people in the rural areas go without water for weeks, further entrenching the divide between those who have had, those who have and those who continue to wait.’ Sisulu added that the creation of a National Water Infrastructure Agency will sustain and improve the performance of all strategically important water-supply systems in regions where water security is at increasing risk, and noted that this agency would work jointly with municipalities, water boards, financial and mining institutions, and the agricultural community.

The COVID-19 outbreak was certainly something nobody saw coming. In April 2020, the Presidency announced a ZAR500 billion budget laying out South Africa’s economic and social response to the pandemic, of which ZAR20 billion was made available to municipalities for the provision of emergency water supply, increased sanitisation of public transport and facilities, and food and shelter for the homeless.

In response to the pandemic, the DWS and Rand Water established the Water and Sanitation National Command Centre (NCC), which started operating on 23 March 2020, tasked with providing water tanks to vulnerable communities and water tankers to fill the tanks with water, and distributing health and hygiene materials. Through the Water and Sanitation NCC initiative, all nine provinces received aid. Re-prioritised funding of ZAR306.5 million saw water-storage tanks being delivered to 158 municipalities and districts between 28 March 2020 and 28 June 2020, with 740 megalitres of water supplied to communities across the country during that period. By 2 July 2020, 7 645 tanks had been delivered. To sustain the COVID-19 emergency water and sanitation intervention, a further ZAR625.6 million of grant funding was re-prioritised.

In addition, the Department of Basic Education (DBE) appointed Rand Water to implement COVID-19 emergency water supply to schools across the country. Some 3 126 schools were to receive water tanks and/or tankers, and these were to be filled with water. This target was later revised down to 2 274 schools and, by 2 July 2020, 96% of those tanks had been delivered.

Sebasti Badenhorst, sales, marketing and distribution executive at JoJo, one of South Africa’s largest water-storage tank manufacturers, says the company was involved in both of the government’s 2020 water tank roll-outs – the initial COVID-19 response and the DBE’s schools project. As the projects were put out to tender, Badenhorst says JoJo received a portion of the work, which was divided across several suppliers. JoJo supplied 1 600 tanks for the nationwide water-tank roll-out, and 190 for the DBE project.

Over and above its contracted work, JoJo supplies tanks to vulnerable communities and organisations as part of its corporate social investment. ‘About half our CSI spend goes to Gift of the Givers,’ says Badenhorst. ‘The other half services the many requests we receive from places like old-age homes or nursery schools. We assist NGOs as much as we can and give until we can’t give anymore.’

More recently, JoJo donated the tanks that were installed at Rahima Moosa hospital in Johannesburg, and Badenhorst says they will likely do the same for Helen Joseph hospital in the coming few weeks.

The Aurum Institute, implementation partner for the Centres for Disease Control and Prevention (CDC) in South Africa, also stepped up in response to the pandemic, launching innovative mobile hand-hygiene stations called Shesha Geza, which means ‘hurry up and wash’ in Zulu. Initially, 17 stations were installed at several public health facilities in Ekurhuleni, Gauteng, with a further 36 units deployed across Ekurhuleni and into the North West province.

‘Understanding challenges with access to clean water and soap or sanitiser for some in our country, this solution goes a long way to ensuring infection control in high volume areas,’ says Bandile Mathandela, the chief operations officer at Aurum Innova, a subsidiary of the Aurum Institute. ‘We are faced with a new norm of having to wash or sanitise our hands more frequently than in the past. We need to make it easier and accessible for people and the handwashing mobile stations do just that.’

A global focus on the importance of WASH is certainly clear: annually we recognise World Water Day, World Toilet Day and Global Handwashing Day. The most recent information by the WHO and UNICEF on access to clean water (published in 2019) by the reveals that more than 2 billion people worldwide (more than 25% of the world’s population) lack access to basic sanitation. About 3 billion people worldwide lack adequate facilities to safely wash their hands at home. As much as 75% of the population in sub-Saharan Africa lack basic handwashing facilities.

The AfDB has long been advocating WASH, and its investment of an estimated US$6.4 billion in strengthening core WASH infrastructure systems over the last decade has helped 52 million people. The bank says that many of its already-established WASH interventions were adapted when the pandemic hit. For example, in Zambia, school children recruited in early 2019 to be WASH ambassadors have since added the COVID-specific message of wearing masks, social distancing and implementing stay-at-home orders to their healthy hygiene and sanitation practices promotion campaign.

In rural northern Malawi, the AfDB co-financed and supervised the Integrated Urban Water and Sanitation project for the Mzimba Town project, increasing the community’s access to potable water from 65% to 95% and raising access to improved sanitation from 45% to 97%.

The AfDB says that over the coming decade, its investments in the water sector should give a further 154 million people access to improved WASH. While that initiative might still not be enough, it certainly is a noteworthy improvement.

African women working in the investment arena have received a US$60 million... END_OF_DOCUMENT_TOKEN_TO_BE_REPLACED

Zimbabwe is growing its status as a battery-minerals hub. The country has... END_OF_DOCUMENT_TOKEN_TO_BE_REPLACED