The drip, drip, drip of a leaking tap… An irritation at best, a symbol of a squandered precious resource at worst. But when a number is put to it, the level of waste can truly be seen for what it is: billions of dollars down the proverbial plughole.

Water provision is a hot topic as headlines shout ever louder about provision as a basic right, who should pay for it, how – for the poorest of the poor – to pay for it, an inability of utilities to keep up with booming populations … and when this most precious resource will run out.

Water security is without a doubt one of the top global risks. It’s at the centre of economic and social development, vital to maintain health, grow food, generate energy, manage the environment and create jobs. But, according to the World Bank, estimates show that with current population growth and water-management practices, ‘the world will face a 40% shortfall between forecast demand and available supply of water by 2030’. Those most affected are people living in urban areas where population growth and urbanisation are already straining infrastructure. Yet water is being mismanaged on a massive scale. Wastage through human action, leaking and broken pipes, non-payment and poor or non-existent infrastructure paints a gloomy picture. And this, of course, is compounded by the accelerating effects of climate change.

According to a 2013 article in USAID’s Frontline online edition, utilities in sub-Saharan Africa, for example, lose almost US$600 million in revenue yearly, or 3.4 million m3 per day, from water losses, ‘a significant portion of what the United Nations estimates is needed to achieve the Millennium Development Goals in improved access to water and sanitation’.

‘Sub-Saharan Africa lags behind most regions in the world in the availability, accessibility and management of water,’ according to a 2016 study – Non-Revenue Water in Sub-Saharan Africa – compiled by consultants Frost & Sullivan. ‘A key challenge for water utilities here is the high water losses in the water reticulation network,’ states the report. ‘These are physical water losses due to leakages as well as apparent losses due to water theft and improper metering.’

According to the 2016 figures, South Africa, Mozambique and Tanzania lose approximately 35% of their total supplied water as so-called non-revenue water (NRW), with Zimbabwe losing 53%. (NRW is that which could potentially create revenue but is lost due to various factors.) In South Africa, most water loss is due to leaking pipes and some is due to theft. Piping material generally has a lifespan of about 40 years but there are many pipes in South Africa that have not been changed out in over 100 years, according to Neil Armitage, of the University of Cape Town’s Department of Civil Engineering and deputy director of the Future Water research institute.

The problem, he says, is how to justify replacing old pipes when there are areas that don’t have infrastructure to begin with. Lost water, of course, earns no revenue, which affects the sustainability and economic viability of a country’s water resources and utilities. Wesgro, the official tourism, trade and investment promotion agency for Cape Town and the Western Cape, hosted one of the biggest-ever water-loss indabas, in Cape Town in 2018, where South Africa’s then Water and Sanitation Minister Nomvula Mokonyane estimated the cost of South Africa’s water loss at ZAR7 billion per annum.

It would not be unfair to pick out Cape Town, which has been feeling the heat in recent years, severe drought conditions compounding the thorny issue of water provision and ineffective water management. The Western Cape province as a whole has been criticised in recent years for wasting massive amounts of water through leaking pipes and other infrastructure problems. In 2017 the provincial Department of Economic Development and Tourism estimated that at least 36 million m3 of water is lost annually in the province alone.

Elsewhere on the continent, Kenya loses up to 430 million litres of water annually (in excess of 42% of its drinkable water to non-revenue water) through ‘leaks, burst pipes, theft or meter inaccuracies [so-called non-revenue water]’, according to a 2018 article in the country’s Daily Nation newspaper, which was reporting on research into the country’s water resources.

In addition, the article states that 42% of Kenyans ‘lack access to improved potable water, while 70% still depend on unimproved sanitation solutions’. As water utilities in Africa strive to ensure increased access to water, it’s become imperative for the continent’s water service providers to find smart and affordable solutions. One of these is water meters, and many African utilities have installed and are managing effective metering solutions, including the Department of Infrastructure, Water and Technical Services in Namibia’s capital city Windhoek, the eThekwini municipality in Durban, South Africa, and the Société Nationale des Eaux du Sénégal, states a report by South Africa’s Department of Water and Sanitation.

According to the report, Windhoek’s water department has ‘one of the best managed integrated water-management programmes in sub-Saharan Africa, and delivers services 24 hours a day’. What’s more, it has a ‘rigorous water-metering system, leakages are contained in time and public awareness of water use has been effectively promoted’. In an effort to reduce water wastage, especially during drought conditions, Windhoek has introduced consumption-related, progressive water pricing by employing a block tariff system.

Durban’s eThekwini municipality, meanwhile, won the prestigious Stockholm Water Week Industry Prize in 2014 for its water-management practices. Water & Wastewater International reports that the utility, for example, ‘introduced innovations to use meters to compel customers to pay, including flow meters that switch to low-pressure mode when people fail to pay their bills’.

Digital technology is now being touted as the most effective answer to the world’s water-provision woes – cutting-edge, next-generation technology that is revolutionising the industry’s monitoring and billing systems. Indeed, a UN report in 2017 flagged smart water as ‘the biggest global technology opportunity’, predicting the smart water-tech market would be worth US$20.1 billion by 2021 (up from US$8.46 billion in 2016). ‘Smart water tech, using smart sensors and cloud data management to improve water infrastructure, will be critical in providing access to clean, safe water for urban citizens around the world,’ the report states.

Key elements of this technology include smart products that can ‘reduce massive water losses in pipes and shrink overall water consumption, and smart sensors that can detect leaks, measure water-related data, including rainfall, pH, temperature, turbidity, flow, pressure and even contamination levels’. These are WiFi-enabled, allowing data to be sent in real time to cloud storage. This data can be used in urban areas to prevent leaks, improve service and boost efficiency. Detecting leaks, especially in underground pipes, is difficult and expensive, and using this smart technology will help to alleviate these types of issues.

The good news is, this technology has already been introduced in a number of African countries, with a quick uptake and successful results. Companies such as South African-based Utility Systems, for example, which has a global customer base, offers cutting-edge smart digital technology for water metering. It has developed three apps, in particular, that allow municipalities to perform unscheduled meter reading with drive-by, walk-by and remote systems.

It also uses advanced meter reading (AMR)and advanced metering infrastructure to deliver accurate data in near real time. By reducing estimation – wholly unreliable due to inaccessible and unreadable meters – with accurate data, municipalities can bill more accurately for water consumption. Utility Systems, among other companies, also offers prepaid metering solutions with AMR data collection, meaning that municipalities get upfront payment and can gauge the amount of water that is used at a particular point. One of Utility Systems’ biggest clients is the City of Cape Town, for which it has installed 200 000 water management devices. ‘Along with other water-saving projects, Cape Town now has the lowest leak rate in South Africa, and is now the number one water-saving city in the world,’ says Utility Systems’ marketing manager Sharon Vermaak. 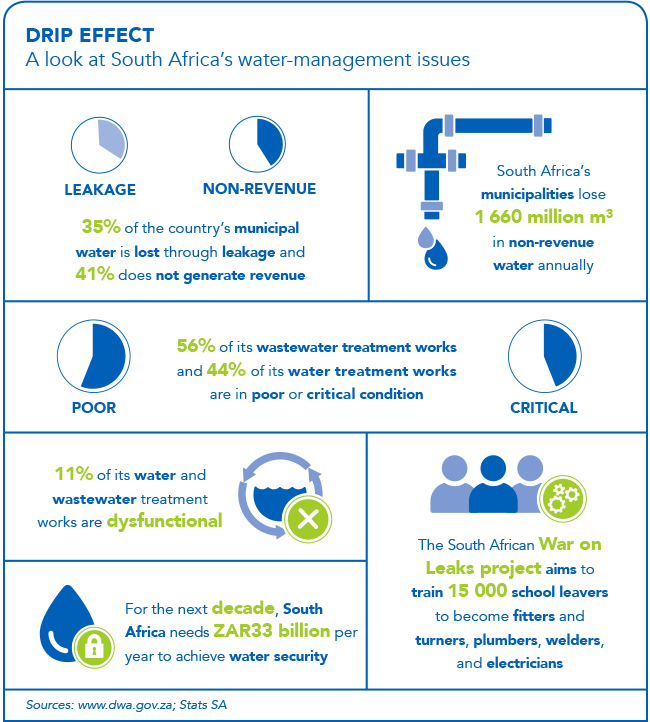 According to business development director Marcus Thulsidas, the company also developed the first commercially available Standard Transfer Specification (STS) Association-approved prepayment water-management device (WMD). ‘When linked to a pulse output water meter, the WMD enables two-way communication, configuration and valve control as well as the option for STS-approved prepaid water supply.’ The system ‘also caters for free basic water requirements at a device level, meaning everything is managed by the device itself’, says Thulsidas. To control supply, it can dispense a predetermined amount of water daily at scheduled times. Of course, this technology does not come cheap. But, as Vermaak points out, ‘the benefits of smart water metering are substantial for water conservation, recapturing lost revenue from leaks and theft, and reducing utility operating costs’.

Another South African-based company, Ontec Systems, has created a smart water-management solution (GaugeIT) to help people monitor their household water usage. By providing near real-time water consumption statistics directly to their mobile phones, it encourages consumers to waste less. The device features hourly consumption stats, early leak-detection alarms and high-usage threshold warnings. People are also able to compare their water consumption with the utility bill to check that these align. ‘By having this level of visibility, consumers are more aware of their water usage and can now actively set their own usage targets in order to reduce their water bills,’ says Dhasi Naidoo, chief strategy officer of Ontec. ‘Consumers can also use the advanced leak detection algorithm to detect and fix leaks, hereby instituting further cost saving when they reduce their water wastage.’

There are many such examples – and they go further. Take the water ATM solution in Kenya’s capital, Nairobi, another success story in Africa’s journey towards successful water management. In a public-private partnership, Nairobi Water and Sewerage Company, the city’s main water distribution company, and Grundfos, a Danish water engineering firm, collaborated in 2015 to install water-vending machines. The machines are now recognised as having revolutionised water availability and distribution in the city’s poorest areas. To buy clean water, users load points onto smart cards, and with a simple swipe of the card across the ATM’s sensor, users can access water from the city’s main supply and tap it into containers. The water reaches the ATM through pipes, connected from the city’s main supply lines, which receive treated water from Ndakaini dam, the city’s main reservoir.

These creative solutions to previously insurmountable problems are increasing apace. And as technology advances more rapidly, water management is set to benefit in all the best possible ways. Enabling the latest technology is a way of fixing what we can – and stopping the drips.

The first transshipment cargo has docked at the new deep-water Port of... END_OF_DOCUMENT_TOKEN_TO_BE_REPLACED

A US$50 million trade-finance facility has been created to help support Africa’s... END_OF_DOCUMENT_TOKEN_TO_BE_REPLACED