In the early 1990s, Rwanda was in the news for all the wrong reasons. The country has, however, subsequently put its ethnic conflict behind it and embarked on the deepest and most enduring investment climate reforms in Africa. Combined with high levels of support for tech adoption and an official view that the Fourth Industrial Revolution is an opportunity, not a threat, it is now reaping the rewards, as shown by its spectacular economic growth.

The World Bank’s newly appointed MD, Kristalina Georgieva, points out that the end of Rwanda’s 1994 genocide, in which 800 000 mostly ethnic Tutsis were killed, coincided with the establishment of Amazon in Seattle. Rwanda’s rescuers, the forces of the Rwandan Patriotic Front under now President Paul Kagame, and the Seattle-based online bookstore had big ambitions. It is no coincidence that Georgieva mentions the two in the same sentence for, in both cases, success revolved around tech adoption.

Amazon achieved a market cap of US$1 trillion in September last year. By adopting technology, the internet bookseller was able to transition to become one of the world’s most iconic online retailers. During the same period, Rwanda has grown at an average of more than 7% per year, the second-highest rate in Africa after Ethiopia. Growth was 8.6% in 2018 and is expected to remain in the 7.5% to 8% range for the foreseeable future, according to the World Bank. Yet national development is far more complicated than business success and Rwanda faced a far more complex task than any company.

The Kagame government had to proceed on two fronts. On the one hand, it faced the immense task of national reconciliation and, on the other, it had to deliver inclusive growth to ensure that the socio-economic drivers of the genocide were eradicated from society. These tasks are still works in progress but the successes to date are exemplary. The World Bank ranked Rwanda the 29th easiest jurisdiction for doing business in 2019, the only low-income country in the top 30 of the 155 countries surveyed (it was ranked 139 in 2005). Petty corruption has been all but eliminated, with Transparency International ranking the country in Africa’s top five.

Rwanda’s capital, Kigali, is considered to be the cleanest city on the continent, thanks in part to the day set aside every month for a cleaning programme called Umaganda. The programme, which is also an element of the national reconciliation process, is led by a president who sets an example by going out and sweeping streets on the designated day. The reforms and social discipline imposed on Rwanda are not without critics. In particular, efforts to reduce the informal street-trading sector in Kigali have been controversial. The country has, however, attracted investment. 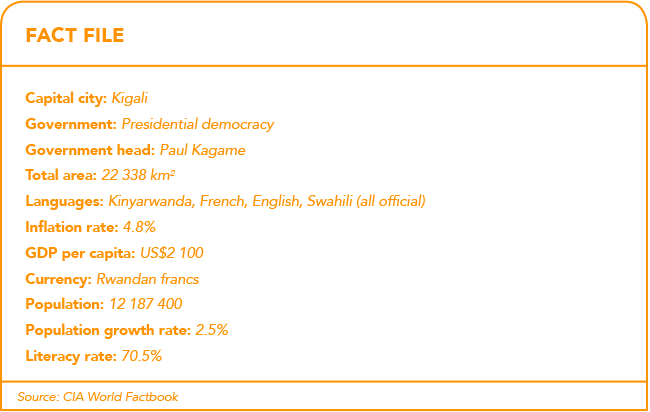 According to the Rwanda Development Board, more than US$2 billion in foreign direct investment was registered in 2018. In fact, Rwanda has become an inspiration to other African countries and is sometimes referred to as providing a possible ‘export model’ that could be implemented by other struggling African economies such as Zimbabwe.

Georgieva observes that Amazon’s success shows that ‘a great deal can be achieved in 24 years’. Rwanda has also achieved a great deal in the same time span, she says, while not minimising the outstanding challenges ahead for the country. It has spread the benefits of market-driven growth, lifting a million of its 12 million people out of poverty since 2000. But, she says, Rwanda currently faces an urgent need to invest in human capital. It is a youthful country with a median age of just 19 years but it is also the most densely populated country in Africa and the subsistence sector faces growing population pressures. One of the measures to manage the issue is the education and empowerment of women. Half the national parliament in Rwanda is required to be female.

The nation has been described as ‘the Singapore of Africa’. A small market with virtually no mineral resources, it seeks to develop through the application of technology and a thriving private sector. Vision 2020, the national development plan passed in 2000, intended to turn Rwanda into a middle-income country by 2020 (a country with a per capita income of more than US$1 006). The country’s current annual per capita income of US$748 (up from US$404 in 2000) and growth rate suggest it will fall just short of this ‘stretch target’. This hasn’t stopped the government from proclaiming its ambition to become a developed country by 2050.

Rwanda’s leaders were quick to recognise the disruptive potential of IT. The National Information Communications Infrastructure policy (2000) set out to create an information economy in four five-year stages. It is included as one of the main goals of Vision 2020: ‘to transition [Rwanda’s] agrarian economy into an information-rich, knowledge-based one’. The early stages saw the establishment of the regulatory environment and the opening of the telecoms market by reducing barriers to entry. The strategy always understood that tech innovation and development is best driven by the private sector and set out to facilitate this.

Claudette Irere, permanent secretary at Rwanda’s Ministry of ICT, argues that the country’s small size, combined with its central location in Africa, is an advantage. It offers a pioneering environment for tech companies to test ideas before scaling these up in bigger markets. Irere has a background in precisely this space having been a founder of Rwanda’s first Fabrication Laboratory (Fablab) in 2016. Fablab is a co-operative space intended to turn innovation ideas into products in hardware and electronics. It draws on the earlier experience of another Kigali-based initiative, software innovation space, kLab.

At present, in Kigali, one can find Rwandans working on ideas such as a pay-as-you-cook stove, linked to the cellular telephony concept of mobile money; a geospatial model that analyses the prospects for renewable energy in South Sudan; autonomous drone designs; 3D-printed water filters; and solar lanterns.

The World Bank argues that ‘the diffusion and adoption of new technologies can help to leapfrog traditional enablers of development’, such as heavy industry and mining. The bank refers to the famous Rwandan example of Zipline, which uses unmanned drones to deliver medical supplies to rural areas in the country. This, says the bank, epitomises ‘leapfrogging’ because it ‘has the potential to reduce the reliance on air transport-related infrastructure’.

One of the biggest tech disruptions is in the way IT is affecting banking and financial services. Transactions are largely done using mobiles or on the internet. The government has embraced the disruption and announced the official goal of becoming a cashless economy by 2024. This would effectively mean leapfrogging the bricks-and-mortar banking phase. Research shows that economies that are more cash intensive tend to grow slowly while those that switch to digital can boost growth by as much as three percentage points. In this, Rwanda’s high levels of tech adoption – 90% mobile penetration and 68% formal financial inclusion (the proportion of citizens who have bank accounts or conduct transactions on their mobiles) – are essential building blocks.

The strands of Rwanda’s innovative tech-based development come together in the investment made by Volkswagen last year. The company has established an assembly plant in Kigali and the first Polo rolled off the production line in June last year. But Volkswagen is not chasing Rwanda’s very small car-sales market, at least not in the immediate future. The company is instead hoping to utilise Rwanda’s high rate of tech-adoption and Kigali’s ambitions to implement a smart-city agenda by offering an experimental ‘mobility solution’.

Volkswagen South Africa CEO Thomas Schäfer, who is overseeing the US$20 million investment, says the company will for the first time anywhere be rolling out a ‘solution’ revolving around ride-sharing and ride-hailing. ‘Community car sharing is offered to closed communities like a company or ministry where people can book the car, use it and return it afterwards. They are charged by either time or distance covered,’ he says.

Vehicles used for ride-hailing services, similar to Uber, will be owned by the carmaker. Future developments include a public car-sharing model, a shuttle service and, later, a peer-to-peer car-sharing system where owners can give up their cars for use and earn money in the process. The Volkswagen investment demonstrates Rwanda’s possibilities as a tech experimental base for Africa and the world. The concepts being introduced in the East African country could pioneer new car ownership and use patterns across the world. Reaffirming Rwanda’s tech capacity, the winner of the tender to develop the initial applications and tech solution is local start-up Awesomity.

Rwanda represents nothing less than a country-scale experiment being conducted in East Africa. Development ideas frequently fall short in implementation, but in Rwanda the concepts of private initiative and good governance are now in place as the foundations of the future. The experimental thesis predicts that these building blocks will result in large flows of innovation and capital, to the benefit of the whole society. So far, the thesis looks like being proven in Rwanda.

Côte d’Ivoire has become the second country to take delivery of COVID-19... END_OF_DOCUMENT_TOKEN_TO_BE_REPLACED

Nigeria is set to commence work this quarter on a complete overhaul... END_OF_DOCUMENT_TOKEN_TO_BE_REPLACED

Burundi and Rwanda are going ahead with plans to build a multi-purpose... END_OF_DOCUMENT_TOKEN_TO_BE_REPLACED