There was a time when university students would scurry from lecture to lecture, clutching books, living the campus life… That is still the case for some but, increasingly, student life looks a lot more like hanging out in online forums, submitting assignments via mobile phone and writing exams in cafés that offer free WiFi. There is no campus life and there are no lecture halls – and that might just be the start of a good thing.

While there’s certainly a sense of nostalgia associated with studying at a campus, the reality for many students is anything but. Working to pay off student loans while studying, contending with arduous and unreliable travel arrangements to get to and from campus, and a lack of preparation for the rigours of tertiary studies mean that many are unable to complete their degrees. And, of course, that’s if they gain entry in the first place – a dearth of formal institutions mean that the number of students hoping to enrol for a tertiary qualification is far greater than the capacity to accommodate them.

‘The money to subsidise higher education in the traditional sense is in short supply on the continent,’ Deirdre Carabine, deputy vice-chancellor at the Virtual University of Uganda writes in a opinion piece published by the Conversation. ‘The money is simply not there to finance increases in infrastructure and human resources. Financing a brick and mortar institution on fees alone is unsustainable.’

Indeed, traditional higher education is one of the most inefficient growth sectors in the world. Amid constantly improving connectivity on the continent and technological advancements with consequences as profound as they are unpredictable, education-as-usual is becoming less viable.

Around the world, distance learning (online-based in particular) is changing the tertiary education landscape. Social networking means user-rating systems for online teachers and courses could see many unwieldy and substandard education offerings becoming redundant – why pay to attend second-rate lectures near your home when you can receive a better-quality experience and qualification online? Not to mention that distance learning is far more flexible time-wise – and generally cheaper to boot.

Traditional universities have had to adapt their delivery models, with many now offering dual learning and online education courses over and above the more traditional model. And Africa is offering some of the best distance education qualifications globally.

The University of South Africa, better known simply as Unisa, is not only the continent’s oldest such institution but also one of the world’s largest. Founded in 1873, it became an exclusively distance-learning university in 1946. Now, however, it’s facing stiff competition as many other e-learning institutions enter the market.

In late 2016, ADvTECH bought a controlling interest – 51% – in the Zambia-based University of Africa (UoA), a distance-learning institution (established through a charter signed by 19 African countries) that, since the 1990s, has made university education from accredited schools available online. The UoA is expected to grow rapidly to meet the ballooning demand for online education in Africa, and ADvTECH has made no secret of its ambitious acquisition and growth plans.

Curro – South Africa’s largest private-education group – recently bought a 50% stake in Botswana-based BA Isago University as part of its stated goal to run 80 campuses by 2020. Curro has announced it will list a tertiary education company on the JSE this year, a rapid expansion that is expected to see the group lift its full-year headline earnings per share considerably, as reported by Business Day.

In addition, social enterprise eLearnAfrica (a hosting portal and mobile app service) has entered into a partnership with the Association of African Universities (AAU) to provide services to the AAU’s 340 plus member universities.

It comes as no surprise then that the e-learning market doubled in size from 2011 to 2016, reaching US$513 million, according to market research company Ambient Insights, which also found that Angola, Nigeria and Tunisia are the continent’s biggest e-learning markets, after South Africa.

Speaking to the Nigerian Tribune, vice-chancellor of the National Open University of Nigeria (NOUN) Abdalla Uba said the university was prompted to undergo a ‘tremendous transformation’ after a huge ‘upsurge in youth seeking admission into the university as a result of their inability to secure placement in conventional universities’ after several of attempts.

‘The demographic has changed,’ he said. ‘We are no longer dealing with civil servants but with young kids who are into new technology’. Uba went on to describe how NOUN had been requested by several countries (including Rwanda, Tanzania, Ghana, Togo and Liberia) to assist them with setting up open- and distance-learning systems.

However, while investment and demand are on an upward trajectory, there are considerable challenges to overcome. South Africa is leading the adoption of online learning on the continent thanks to a proliferation of smart devices and internet connectivity – but it’s far from smooth sailing.

‘Access to technology will increasingly be a problem for the poor and rural people as more and more distance education institutions move into online delivery,’ says adult education expert and professor emeritus of South Africa’s University of KwaZulu-Natal (UKZN) John Aitchison.

‘In addition, effective use of distance education materials, whether delivered online or through print, depends on a certain level of literacy. The idea that disadvantaged or weak learners can be rescued by cheap distance education is a mirage.’

Although e-learning is generally more affordable than traditional university qualifications, it’s still out of reach for many who do not have the means.

‘Funding is one of the biggest hindrances for students to enrol at universities and also distance education universities,’ according to Combrinck. ‘Secondly, prospective students have a problem with connectivity and although they have cell phones, they don’t always have enough money to buy data. Internet connections are quite expensive in South Africa and there are not a lot of free WiFi spots available to students in rural areas.’

Distance-learning institutions may have to look at offering information to students in addition to a means of accessing it too.

‘NWU and the Unit for Open Distance Learning provide free WiFi at their learning centres so that students can connect to the internet,’ says Combrinck. ‘One of our centres, for example, is in Matatiele – a rural area – and students can go to the centre to download information and relevant documentation.’

Lack of connectivity and infrastructure is a very real obstacle to online learning – around just one in three Africans have access to the internet, according to a 2017 Global Digital Statistics report. However, plans to bring wider internet and WiFi connectivity to the masses are well under way as several telecoms companies plot expansion into Africa. 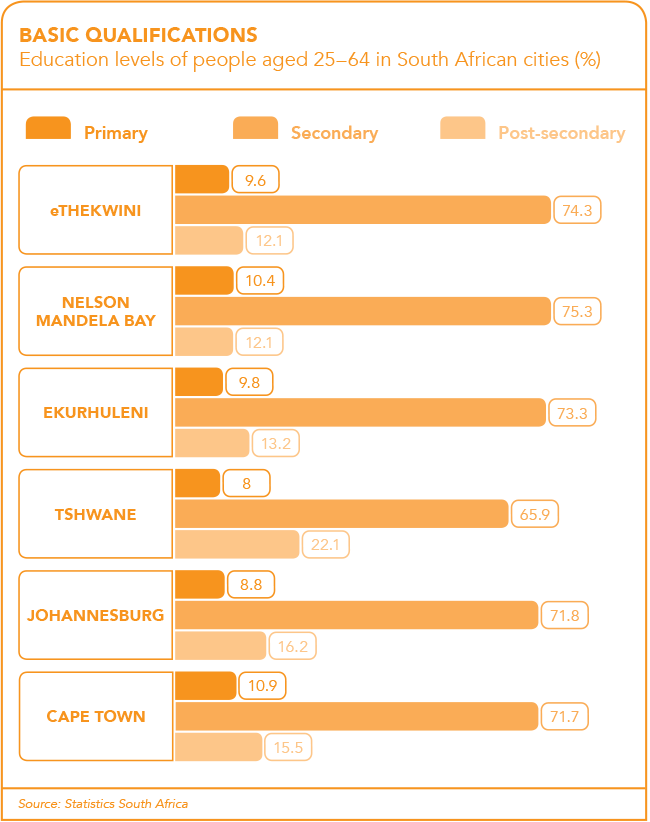 So where are the major opportunities in this online education world? ‘The biggest opportunity lies in the field of basic education,’ says Johan Swanepoel, director of the Wits Plus Centre for Part-Time Studies, in South Africa.

‘The efficient use of distance learning to enhance what is happening in the classrooms can have a profound effect on the quality of the people who enter the labour market or aspire to study at a university.

‘Developing a coherent distance-learning support system, fully integrated with and complementing current schooling initiatives, could improve the throughput of schools, help to overcome skills shortages in the classrooms, add technological savvy to learners, minimise costs, provide access to those in remote areas and reduce the pressure on resources,’ he says.

Aitchison adds that there are a vast number of situations in which aspects of distance education – such as the central design of high-quality materials and the national distribution to learner sites, where a mix of distance education materials are blended with tutorial support – have shown their value in fields as diverse as basic literacy, theological education and basic home-care training.

‘There is much scope for many more practical initiatives,’ he says. ‘Another way of looking at the #FeesMustFall crisis at South African universities is that maybe all potential students could study for a year via distance education to show their genuine capacity for higher education before being admitted to contact tuition universities, all of which currently endure catastrophic dropout rates.’

Many of the challenges will need input from outside the governmental sphere to ensure solutions.

Ghana has opened its first farmer-owned cocoa fermentation centre. The facility, at... END_OF_DOCUMENT_TOKEN_TO_BE_REPLACED

An initiative supporting efforts to ensure the continuation of education amid the coronavirus... END_OF_DOCUMENT_TOKEN_TO_BE_REPLACED

The Namibian government is rolling out a NAD500 million COVID-19 loan scheme... END_OF_DOCUMENT_TOKEN_TO_BE_REPLACED