It’s the age of studying anytime, anywhere. Digital disruption is changing the world and education is no different. Quality education has emerged from the ivy-covered halls of academia into homes, libraries, coffee shops and internet cafes.

Massive open online courses, or MOOCs as they’re colloquially known, are one thing. Mostly free, their popularity has skyrocketed since the New York Times (NYT) named 2012 ‘the year of the MOOC’. But paid-for tertiary degrees – and business degrees in particular – are also seeing significant uptake.

Online learning is coming of age. And nowhere is this more relevant than Africa, which has a shortage of traditional offerings to meet a massive demand. Many traditional universities on the continent are now including business degrees and, in so doing, opening up a world of opportunity to its students.

The continent’s middle class is expanding, economic dynamism is generating business opportunities and with a youthful, increasingly urbanised population, there is a need for young people with business skills. In the past, online business degrees were often viewed with some derision. Now, the world’s most prestigious institutions are offering them; it’s acceptable to have a virtual MBA.

There are challenges, and not everyone sees this development through rose-tinted specs. But it’s a growing reality as education and technology merge. So how is the continent measuring up, why do we need this offering, and how is it evolving? Simply put, the demand for university education is huge – and higher learning institutions cannot keep up. A World Bank study suggests that a fraction (fewer than 10%) of university-age students in sub-Saharan Africa are enrolled in tertiary education.

In Nigeria, about 1 million eligible students will fail to secure a place in a university as the institutions in Nigeria can accommodate only 40% of applicants. In South Africa, the University of Cape Town (UCT) turned away almost 28 000 applicants in 2019, taking only 4 200 first-year students; the University of KwaZulu-Natal had 91 000 applications for 8 770 first-year places. The pattern is repeated across the continent.

Africa is ripe for online learning, fuelled of course by improved connectivity, which has always been one of the main barriers to entry in this space. Stefan Trines, research editor for World Education News and Reviews, writes in an article about the rise of online education in sub-Saharan Africa and South Asia, that the continent is ‘the most dynamic e-learning market on the planet’.

Throughout Africa, global and regional online courses have sprung up, each with different approaches and pricing models. A major player in Africa’s education space is STADIO Holdings. The higher-education offshoot of Curro, stadio is expanding aggressively and, through its ‘multiversity’ concept, has an ambitious vision for learning in South Africa and on the continent.

Esther Venter, STADIO’s institutional registrar and dean of Milpark Education, which is now part of STADIO, says of the growth in online learning: ‘Considering the drivers of change and associated megatrends, online education is becoming increasingly popular. In South Africa, our experience is a gradual growth in uptake of online education. Readiness for self-directed online learning is important.’ She does point out, however, that the uptake in South Africa has been less dramatic compared to Europe and the US. 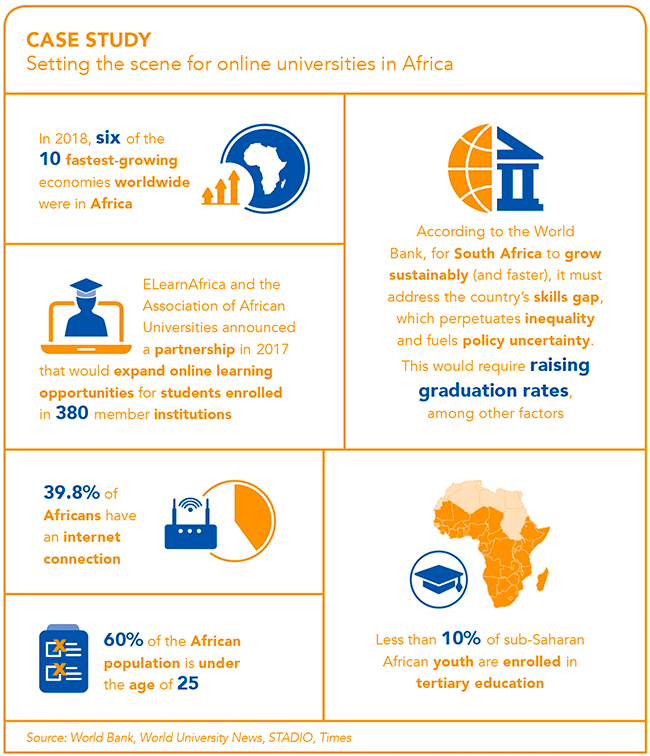 Venter says that she has noticed a sharp increase in the online offerings on the market, with widely varying levels of support and interaction. Some institutions reckon that placing flat content on the internet equals online education, she says. ‘At Stadio we know that small groups, high-engagement, “always on” academic support and continuous lecturer guidance are key to student success when offering formal tertiary qualifications in the online mode.’

Online learning in Africa is a hot topic right now – with both the NYT and the Economist turning their attention to it. Unicaf featured heavily in a NYT article this year. Founded seven years ago, it already reaches 18 000 students across the continent, many of them working adults. Its university-degree offering is largely an online one, with some blended learning options, and covers fields such as business, education and healthcare management. Its BA in business administration is a popular choice, preparing students for the current and future needs of the business world.

After three years, students can opt to continue their studies with Unicaf to earn their degree, or transfer to the final year of the similar programme at the University of South Wales in the UK, and graduate with a degree from a respected UK university. It is also associated with institutions in the US and Cyprus.

As reported in the NYT, Unicaf is moving towards offering more of its own degrees, accredited by African national regulatory bodies. Malawi and Zambia already recognise its degrees and it is hoping to secure accreditation in Rwanda and Zimbabwe soon. There are other examples of best practice, such as the African Virtual University, a pan-African intergovernmental organisation that includes 19 African countries. Since its creation in 1997, the university has trained more than 74 000 students, and partners with 53 colleges and universities in 27 countries.

South Africa is a beacon on the continent with its impressive offering, including most of the established university business schools at the University of Witwatersrand, UCT, Stellenbosch University and Pretoria University, as well as those offered by smaller, privately run colleges – many of which have been bought up by the bigger, listed education companies such as ADvTECH and Stadio Holdings.

Their approaches differ and they speak with the diverging voices of business and academia, but they aim for the same thing: to give African students access to the highest level of business education. Milpark Education – a private premium business-education provider offering distance, online and contact learning – is one example. Stadio acquired Milpark to target top commerce and management qualifications. It has 27 registered programmes for a mainly adult market and corporate clients.

Then there’s the ADvTECH Group, one of the continent’s largest private-education providers, which continues to increase its footprint on the continent. In recognition of the high demand for quality private education, the International Finance Corporation made a substantial investment in the group in 2016 in support of its expansion strategy, much of which involves an online-learning offering.

In the traditional tertiary space, Stellenbosch University Business School (USB) is also a respected player. In terms of its most popular courses, USB has quality guarantees in the form of much sought-after accreditations from the Association to Advance Collegiate Schools of Business, the European Quality Improvement System and the Association of MBAs.

USB was the first school at an African university to hold all three international accreditations for business schools, according to Sbu Kheswa, programme brand manager at USB. It is one of only 90 business schools in the world that hold the so-called ‘triple crown’. Its full-time MBA, meanwhile, is ranked first in Africa by Eduniversal, and its part-time MBA is ranked second globally, also by Eduniversal.

USB’s blended learning format is proving a hit. It allows, for example, students of the postgraduate diploma in business management and administration and its MBA to join a class in real-time on any internet-linked device from anywhere in the world. The mobile app or browser-based online classes are delivered synchronously with the on-campus classes. ‘This enables you to actively take part in classroom and group discussions. This has a significantly increased access to USB’s postgraduate programmes – in particular to students elsewhere in South Africa and in other African countries,’ says Kheswa. ‘We have students logging in from all over the world, while waiting at airports or working construction sites.’

No one can deny the fact that this trend is not showing any sign of abating. With such growth and dynamism in this space, African online education in the business space is set to continue at pace.