Wind, water, sunlight… From the plains of Lake Turkana in Kenya’s Rift Valley to Ethiopia’s Blue Nile river and the Namib desert, Africa has plenty of all three. Yet the challenge is – and has always been – turning those natural resources into sustainable-energy sources. You can’t capture the wind or bottle the sunshine; and while you can store the power harnessed from solar, hydro, wind and geothermal-energy projects, battery technology is – as a 2019 World Bank report put it – ‘costly and not widely deployed in large-scale energy projects’.

That report highlights that the gap was ‘particularly acute in sub-Saharan Africa, where nearly 600 million people still live without access to reliable and affordable electricity, despite the region’s significant wind- and solar-power potential and burgeoning energy demand’. While a handful of switched-on households have invested in solar-power supplies backed up by battery storage, the search continues for viable solutions at a commercial and national scale. Those solutions do exist, however – and for industry figures such as former South African Energy Minister Jeff Radebe, they’re the key to unlocking Africa’s energy future. Speaking at the Renewable Energy and Energy Storage Systems Conference in Cape Town in 2019, Radebe said that ‘the least-cost electricity path in South Africa is likely to be centred around an electrical-energy mix based on solar, wind and complementary technologies, with the contribution of coal set to decline in a manner that is socially just. Renewable energy and energy-storage technologies are a key part of the puzzle to enabling such systems’.

He added that ‘the ability to store electrical energy provides flexibility that can support the supply of electricity to equal prevailing demand at any given time, thereby improving the overall efficiency and security of the electrical-power system’.

In an interview with ESI Africa a year later, Solar MD CEO Kaloyan Dimov noted that ‘any power produced, regardless of the source, can be stored and dispatched at will. Usage can be from a single-cell level to the symphony and multiplicity of modular applications that can be despatched for an entire village or on a utility-scale project’.

As it happens, you really can capture and store the energy produced from the wind and the sun. The trick is being able to do it in a clean, affordable and infinitely scalable way.

In 2019 the WEF and the Global Battery Alliance, a public-private partnership led by the former, commissioned a landmark report into sustainable battery power. It estimated that global battery demand would increase 14-fold by 2030, reaching 2 600 GW per hour – a surge that could spark a sustainable cycle of growth, strengthening environmental protection and economic development, creating quality jobs and expanding access to electricity.

As Benedikt Sobotka, CEO of Eurasian Resources Group, notes in the foreword, ‘the vast potential of the global battery sector transcends boundaries across economies, industries and geographies. Harnessed appropriately, it may help meet the 2°C goal of the Paris Agreement and create millions of safe jobs but also alleviate poverty and tackle ethical issues in the most vulnerable communities. This opportunity should be seized upon but […] it is only through co-ordinated, collaborative action that we can achieve our collective global sustainability ambitions’.

That was two very long years ago. Since then the talk about Africa’s energy-storage potential has turned to very promising action. South African utility Eskom recently floated a tender for the design and construction of a battery energy-storage system (BESS) with a minimum of 80 MW/320 MWh usable capacity to be installed at its existing Skaapvlei substation near the remote village of Koekenaap in the Western Cape, opposite the 100 MW Sere wind-energy facility. In the tender documents, Eskom said that the project represents its first large-scale BESS project, and forms part of a broader BESS roll-out across up to eight sites. 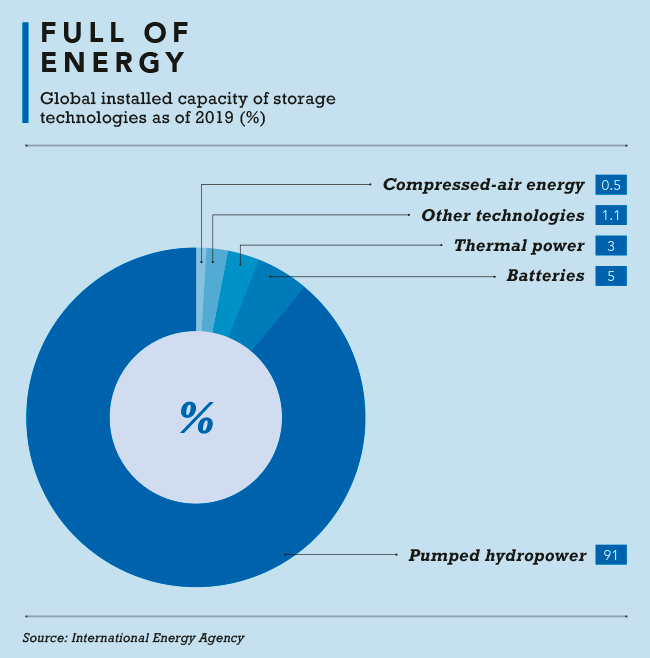 Speaking during a webinar facilitated by Nedbank, EE Business Intelligence and the Johannesburg Centre for Software Engineering, Frederic Verdol, senior power engineer at the World Bank, described the Skaapvlei programme as a demonstration project for the bank (the words he used were ‘pioneer’ and ‘flagship’), which could set the platform for future private BESS projects in South Africa – and possibly the rest of the continent. What makes BESS attractive in an African context – where microgrids cover the places national grids cannot reach – is that it can work with both on-grid and off-grid systems. Its footprint is smaller than other storage technologies such pumped hydro storage and compressed-air energy storage (CAES), and there are no restrictions on its potential geographic locations.

BESS platforms also have the potential to combine the energy-storage capacity of batteries (among them technologies that include lithium-ion) with advanced software such as AI, machine learning and other data-driven solutions, enabling the advanced management of energy consumption. Battery-storage technology has matured dramatically in the past few years. In his presentation Verdol claimed that, with more than 7 000 MW in operation, 15 000 MW under construction and large programmes under way in most large utilities, ‘grid-scale battery-storage technology is now beyond the test phase’. He then outlined the full battery-storage value chain – from mining and refining to cell production and recycling – and argued that South Africa had a unique role to play. ‘My friends in Bolivia and Chile may not agree with me but I firmly believe that South Africa is the best-positioned country to have a development on each of these segments of this battery value chain,’ he said. Verdol went on to add that ‘South Africa may be the only country in Africa where integration and industrialisation in the entire battery-storage value chain is feasible’.

That will come as good news to South Africans – and to people across the continent – who continue to struggle with unreliable national power grids. Ted Blom, a partner at Mining and Energy Advisors, summed it up well during an interview on Radio 702’s the Money Show. ‘The energy problem in South Africa and Southern Africa is very well traversed now, and has been for at least the last 12 years,’ he said. ‘It’s time for people to open their minds and start looking at alternatives, because the Eskom that we knew and relied on for nearly 100 years is no longer capable of satisfying the needs of the South African economy, South African households as well as our industrialised neighbouring countries. I’m very glad that battery technology has come to the fore, primarily because these cries about non-dispatchable renewable energy on its own as a solution have been misplaced.’

Wind and solar power have long been seen as the prime examples of non-dispatchable energy – that is, electricity that cannot be turned on or off to meet fluctuating electricity needs. Advanced battery-storage solutions are changing that perception, promising reliable, on-demand power from clean and renewable sources. That’s a welcome promise. Just ask the good people of Texas. In early 2021 a massive winter storm knocked out about half of the energy-rich US state’s power plants, causing outages that killed dozens of people and catapulted electricity prices to as much as 10 times the normal rate. Elon Musk, billionaire CEO of Tesla – a clean-energy company famous for its smart Powerwall battery system – couldn’t help himself. As millions of Texans shivered at home, Musk tweeted to the Electric Reliability Council of Texas (ERCOT), which manages approximately 90% of the state’s power grid: ‘@ERCOT_ISO is not earning that R’.

Barely a month later, news broke that Tesla’s Gambit Energy Storage subsidiary is building a massive 100 MW battery – one of its large-scale lithium-ion Magapack solutions, powered by wind and solar energy – that will connect to the Texas grid, providing power to about 20 000 homes in peak summer. Reliable power, that is.

Egypt is building what could be the world’s largest solar hybrid facility... END_OF_DOCUMENT_TOKEN_TO_BE_REPLACED

Targeted insurance is being developed to help protect Madagascar’s farmers against the... END_OF_DOCUMENT_TOKEN_TO_BE_REPLACED

Botswana is on track to become the first country in Africa to... END_OF_DOCUMENT_TOKEN_TO_BE_REPLACED