Power supply is a challenge to South Africa’s Kruger National Park and the private reserves surrounding it. The combined area is huge – a touch bigger than Israel and just smaller than Belgium – and, as you’d expect in a conservation area, the environment comes first. Cheetah Plains, a lodge in the Sabi Sands game reserve bordering the park, couldn’t rely on the country’s already-stretched national grid. Its best option was to go off-grid, drawing on its own environmentally friendly, independent, renewable-energy supply. At the end of 2019 the lodge tasked off-grid experts DHYBRID and Blockpower with installing a micro-grid comprising three solar plants, made up of 895 PV modules, a 1 MWh lithium-ion battery storage system and an integrated backup diesel generator.

After switching from the state utility‘s grid to its own power supply, the lodge quadrupled its available peak-power capacity to 250 kW. ‘The new energy system doesn’t just increase security of supply,’ according to DHYBRID CEO Benedikt Böhm. ‘It also ensures grid quality. Moreover, carbon emissions and noise pollution are both decreased.’

Renewable-energy micro-grids (or mini-grids) are decentralised electrification systems, made up of local generation (usually solar), battery storage, a small control room and local distribution lines. Cheetah Plains’ solution is much like what Rockefeller Foundation president Rajiv Shah and Tata Group chairman Natarajan Chandrasekaran had in mind when writing a 2019 op-ed for Fortune. ‘We are now at a tipping point,’ they write. ‘Advances in science and technology have produced next-generation, decentralised energy solutions transformational enough to quickly connect the unconnected and move people to a new level of economic potential. Today, advancements in energy-management systems, smart meters, remote monitoring and new energy-storage technologies make micro-grids the best-possible solution to connect hundreds of millions of people more quickly and more sustainably.’

Shah and Chandrasekaran cite a World Bank report that found more than half of the world’s unelectrified population would be more cost-effectively served via micro-grids. ‘Today micro-grids in rural areas across sub-Saharan Africa and Asia are using control- and data-management systems as sophisticated as what utilities use in major cities,’ they add. ‘It is even possible to pair micro-grids with traditional grid extension for faster, cheaper and more impactful electrification.’

Take London City Airport, for example. There, a subsidiary of UK Power Networks is combining solar PV with new substations and smart-automation software in a micro-grid that is expected to increase the airport’s energy capacity from 3.6 MVA to 7 MVA. ‘Micro-grids are the Holy Grail of new sustainable renewable-energy networks,’ says UK Power Networks services director Ian Smyth. ‘Finding ways to make micro-grids economically viable and self-funding has challenged global energy markets for decades.’

Yet Shah and Chandrasekaran may have found the key to achieving exactly that. The World Bank report cited includes a key finding that could transform the entire energy sector – globally and especially in Africa. ‘Leading developers are now leveraging transformative technologies and economic trends to build third-generation mini-grids with the potential to provide high-quality, affordable electricity at unprecedented scale,’ it notes, adding that a typical third-generation mini-grid consists of a solar-hybrid generation system that includes solar panels, batteries, charge controllers, inverters and diesel backup generators.

‘These mini-grids typically use smart, remotely controlled electricity meters that allow customers to prepay for their electricity in a pay-as-you-go model,’ the report states. ‘They use remote-monitoring systems to manage the status of the system in real-time from a distance. They have also integrated partnership programmes throughout the life cycle of the mini-grid that stimulate the local economic development of their clients, and [they] do this in collaboration with suppliers of energy-efficient appliances as well as micro-finance providers.’

The World Bank report also points out that these third-generation mini-grids often have uptimes that exceed 97%, which works out to less than two weeks of scheduled maintenance per year. ‘This performance is significantly better than previous generations of mini-grids and most utilities across sub-Saharan Africa,’ it notes.

Mini-grids offer a flexibility that a national utility grid such as Eskom simply cannot provide. Add smart software on top of that, and you have a grid system that is highly configurable and remotely manageable. Smart micro-grids take that traditional, centralised, static model of energy generation and distribution and replace it with a measurable, decentralised, dynamic model. Their software and components allow mini-grids to adapt over time to changing local consumption demands, facilitating an integrated on-grid/off-grid interaction that paves the way to energy access. 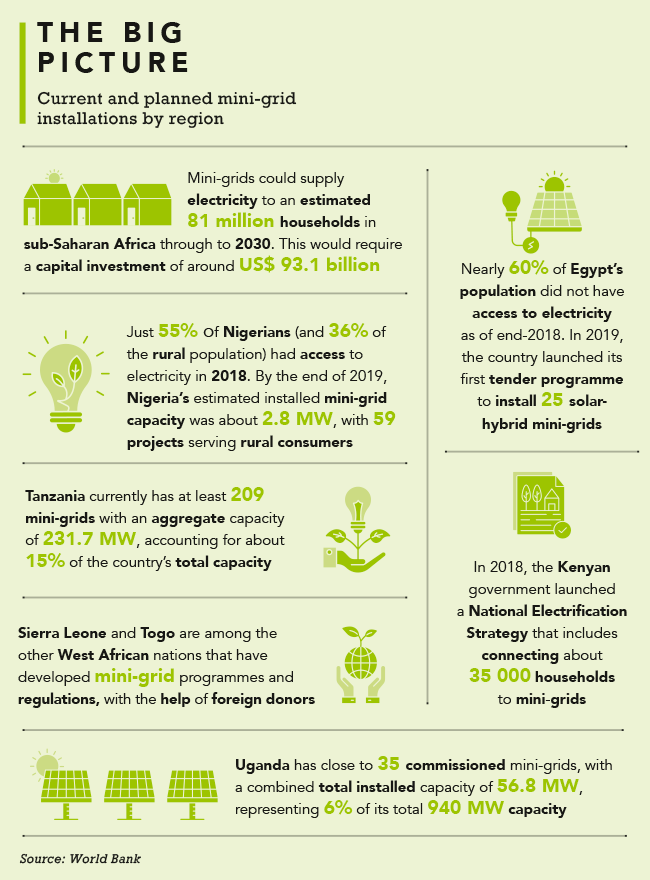 Caspar Herzberg, Schneider Electric’s Middle East and Africa president, outlined this during a panel discussion at the 2019 WEF on Africa. ‘Globally, there is a trend to go towards decentralised grids,’ he said. ‘And with mini-grids we have the opportunity to create an integrated approach to make cities more liveable and efficient. ‘Equally, you want to focus on rural areas with mini-grids to reverse the trend of rural-urban migration. One thing we have found is that when you put a functioning mini-grid, with a business model, in a previously disconnected community, it reverses that trend and creates a new local hub. An excellent example of this is the Onibambu case study in Nigeria, where Arnergy, a Nigerian solar-power company, solved rural electrification in collaboration with Schneider Electric and [the Nigeria] Bank of Industry.’

Onibambu is a village in the Ife North area of Nigeria’s Osun state. It’s tiny (don’t bother trying to find it on Google Maps), with about 200 houses that have never been connected to the national grid. For years, the local energy supply came from candles, kerosene and one or two petrol generators. Then a pay-as-you-go smart-metering system was set up, enabling households to pay as little as NGN100 for their electricity needs. The project aimed to halt rural-urban migration trends – and that’s what happened. The WEF reports that the population of the village has increased, with businesses in neighbouring towns moving in and new businesses established.

Smart metering allows those who are tasked with managing micro-grids to access what Siemens calls a ‘treasure trove of data’, ranging from big-picture usage stats to real-time failures. Its Grid Diagnostic Suite, introduced at European Utility Week in 2019, includes four cloud-based apps that collect, store and analyse data from new or existing field devices, with almost no additional engineering effort required. This allows electricity-grid operators to access information (including faults) from devices installed anywhere in the smart grid and implement the necessary measures. Siemens believes that the suite’s internet of things (IoT) applications will both enhance the availability of power grids and enable them to be operated cost-efficiently.

‘With our new IoT-based offering for energy automation, we are helping to manage the increasing complexity of power grids and prepare for future challenges,’ according to Robert Klaffus, chief executive of the digital grid business unit at Siemens Smart Infrastructure. ‘Data can now be accessed quickly and easily via existing communication channels. In the central MindSphere Cloud, users can then smoothly consolidate, visualise and evaluate data and, if necessary, react quickly. We are paving the way for truly smart grids.’

The World Bank estimates that 47 million people are connected to 19 000 mini-grids around the world. It hopes that, backed by some US$220 billion in required investment, those numbers will increase to 490 million people served by 210 000 mini-grids by the year 2030. Over the course of those 10 years, technologies will mature and surely move from mini-grids to major utilities. After all, the same smart tech that enables micro-grids to improve efficiencies and optimise costs will allow utilities to do the same, at a far greater scale: combating illegal connections, boosting efficiency and keeping prices down.

Egypt is building what could be the world’s largest solar hybrid facility... END_OF_DOCUMENT_TOKEN_TO_BE_REPLACED

Targeted insurance is being developed to help protect Madagascar’s farmers against the... END_OF_DOCUMENT_TOKEN_TO_BE_REPLACED

Botswana is on track to become the first country in Africa to... END_OF_DOCUMENT_TOKEN_TO_BE_REPLACED