Things heated up in late September. Across the world, scores of people – as many as 7.6 million, according to the organisers, and most of them youths – took part in a global strike, protesting at world leaders’ faltering efforts to combat climate change. Greta Thunberg, the teen who has become the face of the worldwide movement, capped the week by delivering a stinging rebuke to the UN, telling the grown-ups in the room: ‘You are still not mature enough to tell it like it is. You are failing us. But the young people are starting to understand your betrayal.’

Pressure is mounting on governments and businesses across the world to do better. ‘In this race to a net-zero carbon economy, energy efficiency and infrastructure maintenance will play a fundamental role, on a scale similar to the construction of greenfield renewable energy projects,’ Tom Florence, CEO of investment firm 361 Capital, recently told the World Economic Forum. He cited estimates from the Lawrence Livermore National Laboratory, which found that more than one-third of energy in US residential and commercial buildings is wasted – from lights left on in empty rooms to inefficient HVAC systems.

In South Africa, businesses are now being encouraged to better manage their energy use by the three-year extension of National Treasury’s energy-efficiency savings tax incentive. Barry Bredenkamp is GM for energy efficiency at the South African National Energy Development Institute (Sanedi), which implements and oversees the application process of the incentive.

‘We’ve been called on by government during this time of constraint to do all we can to reduce energy,’ he says, referencing South Africa’s energy-supply challenges. ‘The incentive gives customers the triple whammy of reducing their bills, improving their carbon footprint and helping to meet the country’s energy requirements, while at the same time, being given a rebate on their tax return.’

With that tax incentive at the back of their minds, South African business owners are looking to invest in energy-efficient office equipment that will further reduce their energy spend and increase their tax break. And it’s not just SMEs that are counting the savings. As Bredenkamp points out, ‘a lot of the blue-chip companies in South Africa have been part of the initial applications [for the tax incentive]’.

Similar shifts are happening across Africa. The recent annual convention of the Architectural Association of Kenya (AAK), held in Mombasa in August, ended with a call for the country to introduce its own green-buildings rating tool by 2020. ‘We want to have our own solution that will take care of our home-made matters by giving a rating of houses within our country,’ Gideon Olawo, environmental design chapter chairman, told the Standard newspaper. ‘Especially with matters concerning climate, ours is unique and there is a need for a rating tool that reflects what we have in our own environment. It will also be used to reflect our own aspirations as a country.’

Visitors to LEED-certified buildings – such as the Ghana Ridge hospital in Accra, Ghana; Garden City in Nairobi, Kenya; or the World Bank office in Juba, South Sudan – will have already seen the benefits of a holistic approach to green building. But businesses across the continent can improve their energy efficiencies without tearing down the walls and rebuilding their offices.

A small intervention such as a smart plug, for example, can allow building managers to monitor and control electronics, reduce stand-by consumption, track energy use, create on/off schedules for electronic devices, and activate/deactivate them remotely. Smart relays, meanwhile, allow wireless on/off control of clusters, groups of appliances or individual elements. They can also be used to remotely activate/deactivate equipment.

With power-metering functionality that enables users to closely monitor their power consumption, smart relays give an insightful and useful overview of what unit groups consume the most power, and when.

Smart cabling converts conventional power cables to a remotely controlled unit, allowing users to monitor their power consumption. This allows for better control of plugged-in electrical devices, with the option to switch electronic equipment on or off.

A smart-energy management system is all good and well, but there is also good business sense in installing heating and cooling units that are themselves more efficient. Consider, for example, the new generation of air-conditioning units coming from companies such as Samsung, which has invested heavily into its R&D to create not only high-functioning solutions but aesthetically pleasing ones, too.

One of Samsung’s latest devices is a wind-free system, which has 21 000 micro-holes on its front surface. Once the set temperate in the room has been reached, the system spreads fresh air uniformly without those typical unpleasant blasts of cold wind so often the case with large units. Another feather in Samsung’s cooling cap is its advanced digital inverter technology, which sees the system reach maximum cooling speed quickly and effectively thanks to an 8-pole motor. Basically, it means getting cooler, faster. Samsung’s system is one of the first in the world to use this technology.

‘Innovative technology puts the “conditioning” right into air conditioners,’ says Mike van Lier, director of consumer electronics at Samsung South Africa. ‘Since the 1920s when movie theatres used their cooler air as a selling point, technology has moved towards creating more than just cooler or warmer air. We’ve moved on to creating healthier indoor environments that refine and condition the air, removing harmful toxins or bacteria. An example of this is the PM2.5 filter, which keeps the air clean by capturing 99% of ultra-fine dust in 100 minutes. It also covers 100% of the air inlet, so it completely filters all of the air coming in.’

Another area where smart solutions can make a considerable impact on energy usage is standard office equipment. Laptop computers consume 80% less energy than their regular desktop counterparts, for example, while inkjet printers use up to 30 times less power than laser printers. More efficient office equipment links back to cooling solutions too, as cooling systems will not have to work as hard if office equipment is pumping out less wasted heat.

In March, HP pledged that every page printed with its equipment would support a forest-positive future, carbon neutrality and materials designed to reduce the impact to the planet. ‘We are redefining the power of print to create a positive, lasting change for the planet, its people and our communities,’ said Enrique Lores, president of HP’s Imaging & Printing business. ‘HP’s commitment to sustainability guides how we do business and drives the way our printers are designed, made and used.’

That pledge included the introduction of a new energy-efficient HP LaserJet A4 printer and EcoSmart black toner with lower melt temperature. Products such as these work together through HP’s Managed Print Services (MPS) offering to help businesses achieve those ambitious sustainability goals and bolster their bottom line. HP claims that some customers have reported a 33% annual reduction in carbon emissions, energy consumption and costs by using the MPS system.

In 2017 HP introduced its first HP Original ink cartridges made using plastic bottles from Haiti. To date, the company has sourced more than 250 tons of ocean-bound plastic for use in its products. That, the company claims, is equivalent to more than 12 million plastic bottles that might otherwise have washed into the ocean and waterways. 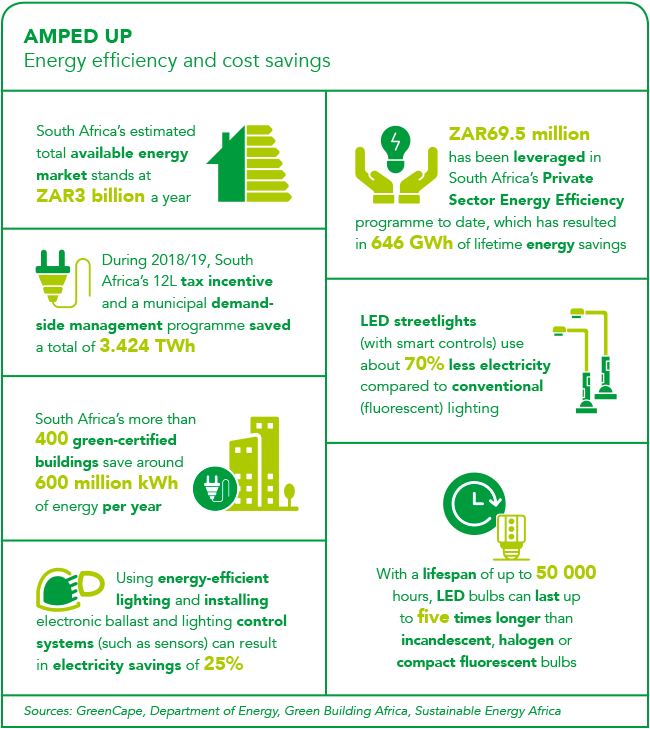 Another significant contributor to office operating costs and energy usage is lighting, which can account for up to 50% of some businesses’ energy use. Fluorescent tubes, which are typically 36W, are a common sight in many office buildings. An equivalent 18W LED tube consumes around 60% less energy (and can last five times longer), making LEDs an attractive energy-efficient alternative.

Signify (formerly Philips Lighting) recently surpassed its five-year commitment to deliver 2 billion LED lamps and luminaires in support of the Global Lighting Challenge. Speaking at September’s Climate Week New York City – with the sound of Thunberg and her fellow protesters echoing across the world – Signify CEO Eric Rondolat said: ‘Another year of record heat waves, fires in the Amazon and Siberia, and the ice caps at their smallest for centuries. The time for debate is over. Now it’s time to take urgent action.’

Rondolat highlighted the ‘low-hanging fruit of energy-saving actions’, calling on businesses to join the Three Percent Club: organisations that are committed to a 3% annual energy-efficiency increase using existing, cost-effective technologies and policy instruments. Rondolat believes that if an increase of 3% energy efficiency is driven by a 3% increase in renovation rates of buildings –  combined with a 3% rise in use of renewables per year – carbon neutrality can be achieved by 2050.

That may not be soon enough for the millions of climate activists… But it would be a huge – and achievable – cost-saving step for businesses across Africa. In the move towards a net-zero carbon economy, businesses are discovering that small interventions can make a big impact on energy usage.

Côte d’Ivoire has become the second country to take delivery of COVID-19... END_OF_DOCUMENT_TOKEN_TO_BE_REPLACED

Nigeria is set to commence work this quarter on a complete overhaul... END_OF_DOCUMENT_TOKEN_TO_BE_REPLACED

Burundi and Rwanda are going ahead with plans to build a multi-purpose... END_OF_DOCUMENT_TOKEN_TO_BE_REPLACED